Libya’s Transitional Government and the Lead-Up to December Elections 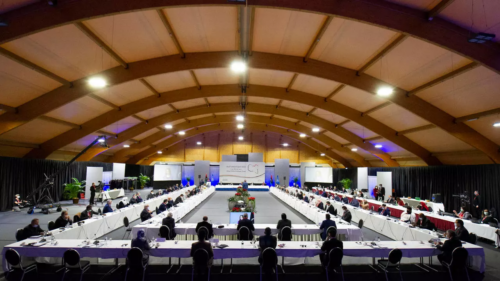 An NIF Zoom event discussing Libya’s transitional government and prospects for the national elections in December.

Federica Saini Fasanotti is a nonresident fellow in the Center for Security, Strategy, and Technology in the Foreign Policy program at the Brookings Institution. She is also a senior associate at ISPI in Milan. She is a historian specialized in counterinsurgency and asymmetric wars. Her fieldwork and research have covered, among others, Afghanistan, Libya, and the Horn of Africa. Her many books include: “Violated Joy. Crimes against Italians 1940-1946” (Ares Editore, 2006); “Ethiopia 1936-1940. Colonial Counterinsurgency through the Sources of the Italian Army” (Historical Office of the Italian Army, 2010), which was selected as a finalist for the “Acqui Storia 2011” Award; “Libya 1922-1931. The Italian Counterinsurgency” (Historical Office of the Italian Army, 2012); “Military History of Afghanistan. From the Durrani’s Empire to Resolute Support Mission” (Mursia Editore, 2014). Saini Fasanotti’s current book project is “The Counterinsurgency Doctrine from the XVII Century to the present,” a wide ranging study on the history, methods, and pillars of counterinsurgency in the modern era. She has published “VINCERE! The Italian Royal Army’s Counterinsurgency Operations in Africa, 1922-1940” with the Naval Institute in Annapolis. She has been a consultant on Libya for James Mattis, the former U.S. secretary of defense and for the Terna Group, the first grid operator for electricity transmission in Europe. In September 2016, she testified before the U.S. House of Representatives Committee on Foreign Affairs about terrorism in Libya. Saini Fasanotti also holds bachelor’s degrees in history of art criticism and contemporary history summa cum laude. She speaks Italian, English, and Spanish.

Dr. Esam Omeish is an Arab American Surgeon in private practice in the Washington DC Metropolitan area. He is one of the founders of DAWN along with the late Jamal Khashoggi and a long-time friend & associate of the deceased. He has helped establish and preside over major Libyan American organizations including Libyan Emergency Task Force, Libyan Council of North America, American Libyan Chamber of Commerce and Industry, Center for Libyan American Strategic Studies, and most recently the Libyan American Alliance, supporting democracy and the rule of Law in Libya after Feb 17 revolution. He is a graduate of Georgetown University with double degrees in Biology and Government & International Relations, and a Medical doctorate in 1993. He is a former candidate for the Virginia State Assembly in the House of Delegates and a former member of a statewide commission on Immigration appointed by then Governor of Virginia Tim Kaine. He serves on several boards and national organizations, and currently is the Chairman of the Waqf Washington Trust of CAIR National ( Council on American Islamic Relations) He has represented American Muslims and Arab Americans on several occasions in the White House, meeting both Presidents Clinton and Obama, in National rallies and political events, and in many media outlets including CNN, MSNBC, FOX, Al-Jazeera, Libyan TV, C-Span, Washington Post, Chicago Tribune, National Public Radio, and others.He continues to serve as frequent speaker, political leader, civic advocate, and a community organizer as well as a provider of health services to the needy and the uninsured. Dr. Omeish was a medical first responder to the tragic events of September 11 where he was the surgeon on call at Alexandria Hospital which received some of the victims of the tragic events in the Pentagon. Dr. Omeish was featured in a book, “A Nation of Nations” by Tom Gjelten of National Public Radio, and published by Simon and Schuster in 2015 as well as by Al-Jazeera featured program on Arab Diaspora in 2018 “Mughtariboon.”

Dr. William Lawrence teaches political science and international affairs at American University’s School of International Service. He has served as a senior diplomat, analyst, and international programs director. He lived and worked for fifteen years in seven Middle Eastern and North African (MENA) countries and France. Since 2011, he served as Crisis Group’s North Africa director, the Center for the Study of Islam and Democracy’s MENA Programs Director, and Control Risks’ MENA Associate Director. Previously, he served as Senior Advisor for Global Engagement in the State Department’s Bureau of Oceans and International Environmental and Scientific Affairs (OES), working closely with the White House on core Obama administration initiatives. He co-created the Global Innovation through Science and Technology (GIST) Program, the U.S. Science Envoy Program, and the Maghreb Digital Library; co-chaired the U.S.-Egypt S&T Development Fund for four years; and served at the U.S. Embassy in Tripoli, helping negotiate the first major U.S.-Libya agreement in decades. He received six merit awards from the U.S. State Department, two medals from the Egyptian government, an alumni achievement award from Duke University, and the 2018 Distinguished Alumni Award from the Fenn School. He appears regularly on NPR, BBC, VOA, France 24, Al Jazeera, and CGTN. He has taught at Georgetown, Johns Hopkins, George Washington, Tufts/Fletcher School, Amideast/Mohamed V in Rabat, and Cadi Ayyad in Marrakech and in the U.S. intelligence community and lectured at over 100 universities worldwide. His research, writing, and consulting focuses on youth protest and political culture; comparative political analysis; security challenges and responses; informal economy, development, and innovation; international policy towards the Middle East and Africa, and international and Islamic law and social change. He also co-produced six MENA-related films and fourteen albums of North African music.

Doug Bandow is a senior fellow at the Cato Institute, specializing in foreign policy and civil liberties. He worked as special assistant to President Ronald Reagan and editor of the political magazine Inquiry. He writes regularly for leading publications such as Fortune magazine, National Interest, the Wall Street Journal, and the Washington Times. Bandow speaks frequently at academic conferences, on college campuses, and to business groups. Bandow has been a regular commentator on ABC, CBS, NBC, CNN, Fox News Channel, and MSNBC. He holds a JD from Stanford University.

Disclaimer: please note that when registering for any of our events, all required fields must be properly filled out. We reserve the right to deny entry for those who fail to do so, i.e. inputting NA in the “organization” or “job title” section. NIF events are by email invitation only and are non-transferable.