Following explosions on two oil tankers, one Japanese-owned and the other Norwegian-owned, in the Gulf of Oman, Secretary of State Mike Pompeo was quick to say that the explosions were the result of a deliberate attack by the Iranian government. The claim was immediately denied by Iran’s mission to the United Nations. Such a denial is par for the course, however there is reason to be skeptical of Pompeo’s claims. The Secretary of State also declared that an attack against American forces– which had already been claimed by the Taliban– was in fact committed by Iran instead. Indeed, the Secretary has repeatedly suggested that a war with Iran is already authorized by the 2001 Authorization for Military Force. 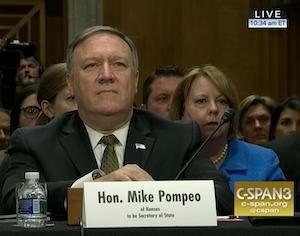 Mike Pompeo at his nomination hearing for Secretary of State

(The AUMF followed the September 11th attacks and provided legislative backing to the Afghanistan war, with the aim of taking action against the perpetrators of the attacks. The successful raid on Osama bin Laden’s compound would have logically ended the statute’s relevance.) Together these show that Pompeo has a long history of fixating on Iran and making claims of its culpability that are baseless. Altogether this raises two

major issues: that the administration seems to have a foregone conclusion in mind when it comes to Iran’s behavior, and that the prolonged use of an obsolete 18-year-old military authorization allows for unilateral warmaking. The combination has raised tensions even further, and the immediate outlook for this engagement is unclear.

Hongkongers Take to the Streets to Protest Chinese Extradition

Following a proposed bill that would allow extradition from Hong Kong to mainland China, locals were alarmed. The legislation would severely undermine the city’s distinctive autonomy and rule of law, which has mostly been retained during the decades of Chinese rule over the island, under the slogan “One country, two systems.” The resultant protests drew the largest crowd (1 in 7 of the population) since China took over rule of Hong Kong from Britain in 1997, which led to a severe reaction from riot police against the peaceful protesters. As a result, Hong Kong’s chief executive Carrie Lam indicated that the bill would be suspended– but did not say that the plans were cancelled. Protesters, seeing this as a delaying tactic, took to the streets today for another peaceful protest– this one double the size of last week’s record. It is not clear whether the citizens’ hopes for a move away from this pro-Beijing policy will come to pass, but their actions show that Hong Kong’s civil society remains alive and well, nurtured by the legal system they seek to protect.

#HongKong June 16, 2019. This protest is absolutely huge. There are multiple streets parallel to this that are packed with protestors too. Surreal that the majority of people on the mainland probably aren’t aware that this is even happening due to censorship #ExtradationBill pic.twitter.com/HdCIhf8ev0

According to information from American intelligence sources, an Emirati businessman, Rashid al-Malik, who was close to allies of the president was in fact spying on the administration on behalf of the UAE. Al-Malik was introduced to White House circles by President Trump’s inaugural committee chair Thomas Barrack– who is close to the UAE’s ambassador to the US, Yousel al-Otaiba and who has received billions in investment from Gulf states. The Emirati government was particularly 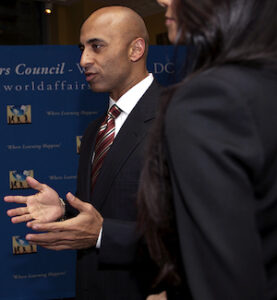 feelings about the Saudi-UAE feud with Qatar, the influence of Saudi Arabia’s Crown Prince, and the Muslim Brotherhood among other matters. While it is not clear what influence al-Malik directly had on the White House, if

any, this is an interesting development in light of the close alliance that the Trump administration has pursued with the Emirati and Saudi coalition, including when the

coalition opposes other American allies. Given the deeply personal approach to foreign policy undertaken by the Trump administration, the revelation of a spy coming through those very channels might have real effects in the Oval Office.

‘The Deal of the Century and Israeli Democracy’ Event

It was our pleasure to host Israeli human rights activist Jafar Farah of the Mossawa Center for a discussion of Israeli-Palestinian peace, Israeli politics, and the prospects of resolution. A wide audience of diplomats, academics, professionals, and the public attended the event, which was held at the National Interest Foundation’s office in Washington DC.

You can see a recording of the event right here, and if you couldn’t make it we hope to see you next time!

We enjoy having readers at our events, and will make sure to note upcoming ones here in the newsletter, so you can RSVP accordingly.