Welcome to our NIF Newsletter. In this week’s headlines: Israeli opposition figures agree to form a coalition government in an effort to oust embattled and criminally-indicted Prime Minister Netanyahu, the United Nations Human Rights Council (UNHRC) orders an inquiry into Israeli war crimes committed during the recent bombing campaign in Gaza, and the World Food Programme (WFP) warns that an alarming 90% of Tigrayans are in dire need of humanitarian aid. 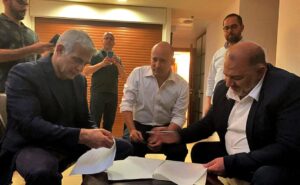 Several Israeli opposition parties have formally agreed to create a coalition government that would oust embattled and criminally-indicted Prime Minister Benjamin Netanyahu after twelve years in power. Members of the Knesset will vote to ratify the new government in the coming days, and if the vote succeeds, then Israel will have a new prime minister for the first time in over a decade. Israel has been at a political deadlock for the better part of the last two years, with four separate elections failing to resolve the crisis. A coalition with Netanyahu and defense minister Benny Gantz recently fell apart after Netanyahu broke several agreements, which resulted in Israel’s most recent election. In that March 2021 election, Netanyahu’s Likud party secured the most votes, however the tally was short of the threshold required to form a government. Due to his polarizing governing style and a serious ongoing criminal case against him, Netanyahu failed to recruit partners to form a coalition, which resulted in Israel’s President Reuven Rivlin giving opposition parties a mandate to do so. Now, Yair Lapid of the Yesh Atid party has formed an eight-member coalition government which includes Arab-Israeli and right-wing members, among others. The key to this coalition is Naftali Bennett and his right-wing Yamina party. Bennett is a former ally of Netanyahu, and would become Israel’s next prime minister under the agreement before handing power to Lapid as part of the terms to rotate the position. 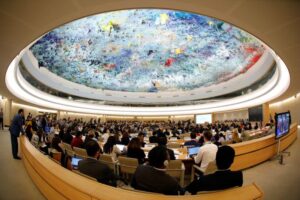 The United Nations Human Rights Council (UNHRC) has launched a far-reaching investigation into war crimes committed by Israel in its latest bombing campaign of Gaza, which included the glaring targeting of civilian and residential infrastructure. The commission has been charged with investigating “all underlying root causes of recurrent tensions, instability, and protraction of conflict, including systematic discrimination and repression based on national, ethnic, racial, or religious identity.” It is also open-ended, which means the panel is not limited to reaching a conclusion within a certain timeframe. Pakistan proposed the panel to the human rights council on behalf of the Organization of Islamic States, and it passed by a tally of 24-9. Ironically, the regimes in several countries that are known for their disregard of human rights such as Russia, China, and Venezuela voted in favor of the commission, whereas European countries generally voted against it or abstained. This highlights the difficulty that the international community has had in differentiating political concerns from legitimate humanitarian concerns with respect to the Israeli-Palestinian conflict. Israel denounced the investigation as one-sided and biased, despite clear evidence as to its abusive behavior and the fact that the commission also has the scope to investigate the actions of Hamas. 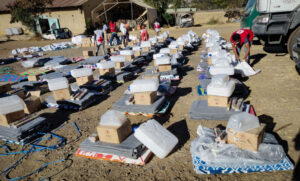 The conflict in Tigray has resulted in millions being displaced and requiring humanitarian assistance. (Photo from ICRC)

Earlier this week, the World Food Programme (WFP) expressed that an alarming 90% of Tigrayans are in dire need of humanitarian assistance, as the northern Ethiopian region continues to be ravaged by the months-long conflict there which began last November. To date, thousands of civilians have been killed as a result of the fighting, and millions more have been displaced from their homes and require relief services. In the preceding weeks, aid agency officials have warned that urgent measures need to be taken to ramp up supportive efforts in order to avoid the outbreak of a widespread famine. The humanitarian crisis has been exacerbated by assistance workers’ difficulties in reaching the most vulnerable communities in Tigray, particularly those in rural and isolated areas. Moreover, extremely high levels of local crops and livestock across the region have been lost, further adding to the rife food and supply shortages. The WFP has appealed for more than $200 million to address the growing disaster which has had a devastating effect on the civilian population.