Welcome to our NIF Newsletter. In this week’s headlines: Israeli police commence a mass crackdown on Palestinian social justice activists who participated in peaceful demonstrations against Israel’s recent string of abusive behavior, U.S. Secretary of State Blinken travels to the Middle East in the aftermath of last week’s Israeli-Palestinian ceasefire, Belarusian authorities draw condemnation for forcing a Ryanair commercial flight to land in order to detain a dissident, and the United States imposes restrictions on Ethiopian and Eritrean officials over human rights violations committed during the Tigray conflict. 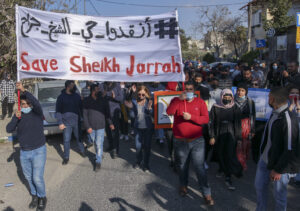 Rights groups have criticized Israeli authorities for their repressive tactics toward peaceful protesters. (Photo from AFP)

This week, Israeli police initiated a large-scale crackdown on Palestinian social justice activists who took part in peaceful demonstrations against Israel’s recent string of abusive behavior. Over the past month, protesters have been participating in sit-ins and rallies opposing an array of Israeli human rights violations such as the plans to forcibly displace Palestinian families from their homes in East Jerusalem, the violent raids on the Al-Aqsa Mosque compound, and the bombardment of civilian targets in Gaza. Now, Israeli authorities are launching the mass crackdown in an effort to intimidate and penalize Palestinian activists for voicing their outrage at the flagrant misconduct. Rights groups had already been critical of Israeli forces for their repressive and heavy-handed tactics toward peaceful protesters, and this latest move has also been decried as a blatant attempt to try to terrorize Palestinians and silence dissent. The wave of arrests comes at a time when Israeli authorities are under increased scrutiny for their actions, with ample documented evidence showing security forces engaging in brutal and unprovoked violence against demonstrators.

Blinken’s Trip to the Middle East 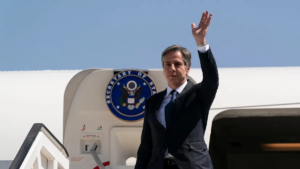 Secretary of State Blinken met with regional partners in the Middle East this week. (Photo from Reuters)

U.S. Secretary of State Blinken Travels to the Middle East in the Aftermath of Last Week’s Israeli-Palestinian Ceasefire

In his first official trip to the Middle East, Secretary of State Antony Blinken met with the leaders of Egypt, Jordan, Israel, and Palestine in an effort to prolong the ceasefire between Israel and Hamas. Blinken announced several new initiatives by the Biden administration to support Palestinians, including over $38 million in new aid to assist with humanitarian support and the reconstruction of Gaza after nearly two weeks of Israeli bombardment of civilian and residential targets. Egypt and Jordan also pledged additional aid for Palestinians in the West Bank and Gaza, as did Qatar. Additionally, Secretary Blinken confirmed that the United States would be re-opening its consulate in Jerusalem, which largely served Palestinians before it was shuttered by the Trump administration. During meetings with Jordanian and Egyptian officials, Blinken pledged that the United States was committed to working with its regional partners to ensure safety and stability in the illegally-occupied Palestinian territories. 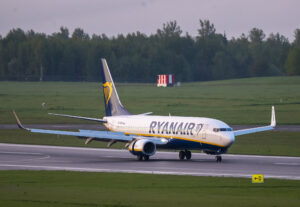 The Ryanair flight was forced to make an emergency landing so that officials could arrest an opposition activist. (Photo from AP)

Authorities in Belarus sparked international outrage this week after President Alexander Lukashenko’s regime forced a Ryanair passenger flight to land in the country so that it could arrest an opposition activist on board. The Ryanair flight was passing through Belarus’ airspace on its way from Athens to Vilnius when officials used a fake bomb threat to divert it to Minsk for an emergency landing. Once on the ground, security agents arrested Roman Protasevich – a Belarusian blogger who played a critical role in last year’s mass protests against the incumbent leader. The action has been widely condemned as an egregious human rights violation, with the European Union moving to sanction Belarus and also urging airlines to avoid flying over the country’s airspace. The United States and Canada spoke out as well, with U.S. President Biden calling it a “shameful assault on both political dissent and the freedom of the press.” The detainment of Protasevich is part of Lukashenko’s efforts to brutally suppress opposition forces in the country in the face of large-scale resistance against his regime.

Restrictions on Ethiopian and Eritrean Officials 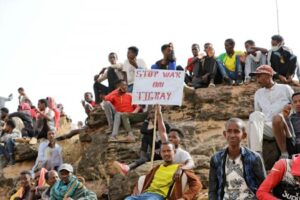 The United States hit Ethiopia and Eritrea with sanctions over human rights abuses in Tigray. (Photo from AFP)

The United States has imposed sanctions on Ethiopia and Eritrea over the ongoing human rights violations in the Tigray region of northern Ethiopia. Several Ethiopian and Eritrean officials have been hit with a visa ban, and military and economic assistance to Addis Ababa has been cut, with the exception of humanitarian supplies. The United States has been vocal in calling for an end to the months-long conflict in Tigray, where federal Ethiopian and Eritrean forces have been credibly accused of war crimes and human rights offenses. Secretary of State Antony Blinken said that the imposition of sanctions was in response to the lack of meaningful steps to end hostilities in Tigray. Thousands of people have been killed since the fighting began several months ago, with an additional two million displaced. The violence has raised concerns of an ethnic cleansing campaign, with Ethiopia’s ethnic Tigrayan population being vulnerable to abuse by government forces.