Welcome to our NIF Newsletter. In this week’s headlines: Israel continues its airstrikes on civilian targets in Gaza as some U.S. lawmakers question arms sales amid growing condemnation of Israel’s actions and human rights violations, and pro-Palestinian solidarity demonstrations take place around the world calling for an end to the Israeli attacks on civilian targets in Gaza and the plans to forcibly displace Palestinians from their homes. 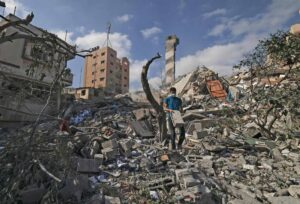 The Israeli attacks on civilian and residential targets in Gaza have continued this week. (Photo from AFP)

Violence has continued in Gaza this week, as Israel continues to strike civilian targets in Palestinian territory. The attacks carried out by the Israeli Defense Forces (IDF) have killed hundreds of Palestinian civilians, and have destroyed scores of buildings including refugee camps, schools, and infrastructure housing multiple international media outlets. The United States has blocked United Nations Security Council resolutions condemning the airstrikes, as the Biden administration has received criticism for its underwhelming response to the crisis and Israel’s actions. President Biden has received pushback from multiple entities over the brutal human rights abuses being committed by Israel. Some progressive Democrats in particular have steadfastly condemned Israel’s unilateral and disproportionate aggression in Gaza, and a proposed arms sale to Israel is now being held up by Congressional Democrats who have valid concerns over the violence in the region. Several human rights organizations have also called on the Biden administration to intervene and prevent Israel from continuing to blatantly violate international law.

In recent days, criticism of Israel has grown stronger from the international community at large, with a widespread acceptance that there is a clear violation of international law occurring. The Arab League accused Israel of ethnic cleansing, and accusations of apartheid have long been levelled against Israel. In the United States, progressive lawmakers have been critical of both Israel and the Biden administration. Several representatives, most notably Reps. Rashida Tlaib, Ilhan Omar, and Alexandria Ocasio-Cortez, have been vocal in their dissatisfaction with the Biden administration for failing to take a stronger stance against Israel’s behavior, despite the violence being perpetrated against Palestinian civilians. In total, over 1,500 Palestinian civilians have been wounded since Israel’s most recent belligerent activity began, with over 220 killed, including 63 children.

Some Democrats initially sought to delay a $700 million weapons sale to Israel agreed by the Biden administration, but backed off this plan, saying “it sent the wrong message” because the transaction was a commercial sale, not a military transfer. Despite the caucus backing off of this, a group of progressive Democrats have broken rank and introduced a resolution that would block the sale. This is largely symbolic, as it is unlikely that rank and file Democrats would agree to bringing the matter to a floor vote. However, several top Democrats, including Speaker Nancy Pelosi, have called for the Biden administration to push for an immediate ceasefire.

A major cause for concern in the recent escalation of violence is Israel’s completely disproportionate military action. Israel currently boasts one of the world’s most technologically advanced militaries, thanks largely to American tax dollars and support, which it has used to wreak destruction on Palestinian territory. While there have been rockets fired from Gaza into Israel, most have been destroyed by Israel’s Iron Dome air defense system, which has resulted in very little damage to Israel. Conversely, Israel has waged a campaign of complete destruction, with bombs targeting civilian infrastructure that is defenseless. This follows a broader trend of Israeli discrimination, whereby Palestinians are treated as second class citizens compared to Israeli Jews.

Tens of thousands of Palestinians are currently displaced due to the Israeli violence, and the authorities have made no effort to ensure that these at-risk individuals are safe. Israel has failed to indicate when their “operation” against Gaza will conclude, and concerned observers are urging for stronger action to be taken to put an end to their belligerent and criminal actions. To this end, in a Wednesday phone call between U.S. President Biden and Israeli Prime Minister Netanyahu, Biden was noted for using a more forceful tone in demanding that Israel engage in a “significant de-escalation,” language that at the very least highlighted an acknowledgement as to the dire nature of the situation. Analysts have indicated that they believe a ceasefire is in the offing, as the international community continues to pressure for an end to the crisis. 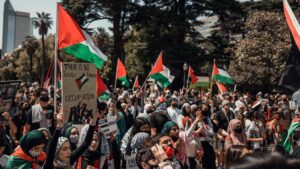 People in countries all over the world have been outraged with the series of recent Israeli abuses against Palestinians. (Photo from AP)

Over this past week, pro-Palestinian demonstrations have sprung up both here in the United States and around the world calling for an end to the Israeli attacks on Gaza and other serious human rights violations. Large gatherings were organized in major cities in the United States like New York City, Los Angeles, Washington D.C., and Boston, where thousands marched in solidarity with Palestinians. Globally, demonstrations also took place in every corner of the world, from multiple countries throughout Europe to the continents of Asia, Africa, and Australia. All told, social justice and human rights activists have been outraged with the series of recent Israeli abuses toward Palestinians, which include airstrikes on civilian and residential targets, plans to forcibly displace families from their homes where they have lived for generations, and police violence. Israel’s actions in the preceding weeks have brought about the latest crisis and escalation in tensions, and citizens across the globe are rightfully demanding that a stronger stance be taken regarding its reprehensible behavior.

The solidarity demonstrations in the United States spanned from coast-to-coast, in Eastern metropolitan hubs like New York City, Washington D.C., and Philadelphia to those on the West coast such as Los Angeles, Sacramento, and San Francisco. Attendees spoke about Palestinians’ struggle for social justice as one of the world’s most critical human rights issues, and highlighted the ways in which Israel’s aggressive and provocative behavior has boiled over into this most recent outbreak of hostilities. In addition to this string of deplorable actions, the ongoing and longstanding illegal Israeli occupation of Palestinian territory was also pinpointed as a major obstacle to the advancement of the peace process by many of the rallying advocates. Many of this past weekend’s protests were held on the anniversary of Nakba Day, the annual commemoration and remembrance of the Palestinian Catastrophe – which saw hundreds of thousands of Palestinians displaced from their homes upon the creation of the state of Israel in 1948.

The outpouring of support for Palestinians was evident in locations throughout Europe, Asia, Africa, and Australia too, with gatherings being held in numerous cities across those continents as well. Some of the largest and most prominent rallies took place in European capital cities like London, Madrid, Berlin, and Paris. One of the consistent themes of the demonstrations was the sense of outrage with the staggering level of civilian casualties in Gaza due to Israel’s continuous barrage of deadly airstrikes on the besieged and blockaded Palestinian territory. The war crimes being committed there by the Israeli Defense Forces (IDF) are undeniable, as witnessed by the clear targeting of non-combatant buildings – such as schools, refugee camps, and residential infrastructure – which has resulted in the death of hundreds of Palestinian civilians, including a disturbing number of children. The Israeli attacks on Gaza have also displaced more than 50,000 Palestinians from their homes, as families flee to escape the danger of the nearby airstrikes.

In recent days, President Biden’s visit to tour a Ford facility in Michigan was also met with a large-scale pro-Palestinian solidarity demonstration. Thousands of protesters gathered to denounce the human rights violations being committed against the Palestinians, with some additionally expressing a dissatisfaction with the underwhelming response of the Biden administration to Israel’s destructive role in bringing about the crisis. Rally attendees stressed the need for the president to specifically address the importance of protecting Palestinian human rights, especially in light of the disregard being shown by the Israeli authorities towards them on multiple fronts – with police violence toward worshippers at Al-Aqsa Mosque, with the planned forcible displacement of Palestinian families from their homes, and with the airstrikes against civilian targets in Gaza. Demonstrators called on Biden to “walk the walk” regarding his rhetoric on affirming the United States’ duty as a defender of human rights, pointing out that countries like Israel should be held to certain expected standards with respect to this vital issue.

Lastly, Palestinians themselves took part in the efforts to display solidarity with the besieged civilian population in Gaza, with many going on strike in a collective protest of Israel’s abusive actions. The “karameh strike” – dignity strike in Arabic – was called to show Palestinian unity amid both the ongoing Israeli assaults on Gaza and the recent repressive crackdowns against peaceful protesters. Citizens from a variety of professions including teachers and doctors engaged in the endeavor earlier this week, with many also using the opportunity to participate in demonstrations decrying the Israeli airstrikes and human rights violations.