May 13, 2021 / NIF USA / Comments Off on The National Interest Foundation Newsletter, Issue 96

Welcome to our NIF Newsletter. Eid Mubarak to all those celebrating today! In this week’s headlines: Israel carries out airstrikes against civilian targets in Gaza after an escalation in tensions due to Israeli police violence toward human rights activists supporting Palestinian families under threat of forced displacement from their homes and worshippers at the Al-Aqsa Mosque, and a recent Pew Research Center survey finds that President Biden’s approval ratings are a mirror image of Trump’s among religious groups in the United States. Additionally, we also recap Wednesday’s NIF Zoom event on the grave human rights violations being committed by the Chinese government in its ongoing persecution of the Uyghurs. 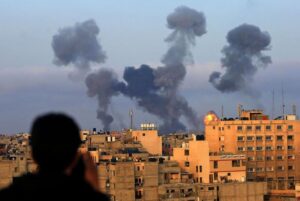 The Israeli attacks have struck schools and residential buildings, with children among the civilians killed. (Photo from AFP)

This week, Israel has carried out deadly airstrikes against civilian targets in the besieged Gaza Strip following an escalation in tensions due to Israeli police violence toward human rights activists supporting Palestinian families under threat of forced displacement from their homes and worshippers at the Al-Aqsa Mosque. The latest troubling developments come in the aftermath of several nights in which Israeli security forces raided the mosque compound, engaging in brutal violence against Palestinians congregating there during the month of Ramadan – which left hundreds injured and hospitalized. Additionally, hostilities have also been heightened in preceding weeks over Israeli authorities’ plans to forcibly expel Palestinian families from their homes in the east Jerusalem neighborhood of Sheikh Jarrah, and activists peacefully protesting the move have been met with heavy-handed and repressive police tactics. The situation has deteriorated in recent days, and the subsequent barrage of Israeli airstrikes on Gaza have been condemned for striking residential areas, with children among those killed during the attacks. Independent human rights experts have expressed serious concern with the disturbing level of civilian casualties, and are urging for de-escalation. Ultimately, impartial observers have criticized Israel for its string of aforementioned aggressive and provocative behavior that has led to the crisis. 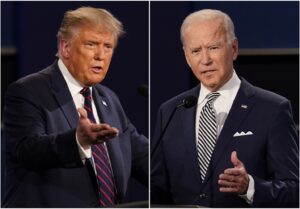 A recent Pew survey delves into how Trump and Biden compare with respect to approval ratings among religious groups. (Photo from AP)

This week, the National Interest Foundation (NIF) hosted a Zoom discussion on Wednesday, May 12th, discussing China’s ongoing crimes against humanity toward the Uyghurs in Xinjiang province. The panel featured Joanne Lin of Amnesty International USA, and Mustafa Aksu of the Uyghur Human Rights Project. The discussion was moderated by Hamdi Rifai of the Council of United Syrians and Americans. The panelists spoke about the specific atrocities being committed against the Uyghurs in China’s western Xinjiang province, what the international community is doing to confront Beijing’s abuses, and additional topics. The panel concluded with a question-and-answer session with the audience.

The event began with Hamdi Rifai asking Joanne Lin for her perspective on what has been happening in Xinjiang, with her expertise coming from Amnesty International’s advocacy work. She spoke on the forced exile of many Uyghurs, and how families have been forcibly separated by the Chinese authorities. Oftentimes, when several family members flee Xinjiang, the Chinese authorities take retribution on the family members left behind. This has frequently manifested itself through elderly people being abused after their adult children flee the province. She also spoke on the specific atrocities being committed against the Uyghurs and other Muslims in Xinjiang, including forced sterilization and labor, arbitrary detention, and torture. Joanne also spoke on the potential for international bodies such as the United Nations to take action against China’s abuse of the Uyghurs, because the policies were being directed from the highest levels of the country’s government. However, she warned that significant punishment was unlikely due to China’s standing as a permanent member of the United Nations Security Council. Despite this, the growing international outrage over the treatment of Uyghurs has helped create coalitions that could impact China’s actions toward them and other vulnerable populations in the future.

The conversation then turned to Mustafa Aksu, who has Uyghur heritage. He discussed his familial struggle with the abuse in Xinjiang, and the trouble he has personally faced from the Chinese authorities. Mustafa also spoke on the Chinese government’s efforts to silence dissenters abroad by threatening them, as well as their family members who still live in Xinjiang. Additionally, he commented on the ongoing forced labor in Xinjiang, and how that affects global supply chains. Using the example of multinational corporations sourcing cotton produced from forced labor in Xinjiang, Mustafa explained that the United States had banned the import of certain goods produced in Xinjiang. To conclude, Mustafa warned that he was pessimistic over the chances for Uyghur livelihood to improve in Xinjiang, because China was waging a war against the group’s culture, including traditional lifestyles and the Uyghur language.

To watch the entire event, including the Q&A session following the moderated discussion, please click here.