Welcome to our NIF Newsletter. In this week’s headlines: The White House states that it will set an increased refugee cap by the middle of next month following backlash over its initial decision to expand the eligibility criteria for resettlements but keep the historically low limit set under the previous administration, President Biden unveils the plans to withdraw all U.S. troops from Afghanistan by September 11th of 2021, former police officer Derek Chauvin is found guilty on all charges in the high-profile George Floyd murder trial, and tensions between Russia and Ukraine escalate as Moscow engages in bellicose behavior on the border.

Refugee Cap Increase in May 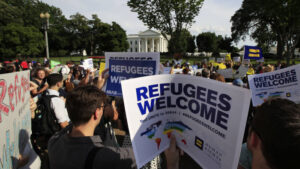 President Biden has pledged to increase the refugee cap in the coming weeks. (Photo from AP)

The White House has stated that it will set an increased refugee cap by the middle of next month following pushback over its initial decision to expand the eligibility criteria for resettlements but keep the historically low mark set under the previous administration. President Biden backtracked over a proposal to limit the number of refugees who can enter the United States to 15,000, and had promised during his presidential campaign to increase the number of refugees admitted from that figure to 62,500 by the end of the fiscal year and then to 125,000 for the 2022 fiscal year. However, it was revealed late last week that the cap would remain at 15,000 due to concerns over the government’s ability to process refugees. Correspondingly, Biden came under heavy criticism from Republicans and Democrats alike, and his administration reversed course, saying that a new proposal would be presented before May 15th. The original decision to keep the refugee cap at 15,000 was heavily criticized by rights organizations, in addition to lawmakers in Congress. Analysts have indicated that Biden may have felt pressure to limit the number of incoming refugees because of the ongoing migrant crisis at the southern border. 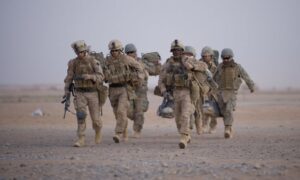 Biden highlighted that the U.S. would withdraw troops responsibly and in full coordination with our allies in Afghanistan. (Photo from Getty Images)

President Biden Unveils the Plans to Withdraw All U.S. Troops from Afghanistan by September 11th of 2021

During the past week, President Biden outlined the plans to withdraw all American troops from Afghanistan by the milestone date of September 11th, 2021. In his announcement of the move, Biden expressed the importance of putting an end to the “forever war” in Afghanistan and stressed that the United States cannot continue the cycle of extending its presence there in the hopes of creating the ideal conditions for its withdrawal. Instead, the administration pledged a commitment towards a responsible pullout of forces which would be undertaken in full coordination with local allies and be mindful of fears regarding potential political regression. As such, the United States intends to remain closely involved diplomatically in the Afghan peace process while also still providing humanitarian and assistive services to its government. President Biden’s troop withdrawal plan was expectedly met with mixed reactions, with some arguing that it could further destabilize Afghanistan. Others however, including former President Obama, praised it as long overdue and the right foreign policy move, commenting that “it is time to recognize that we have accomplished all that we can militarily” in the country. 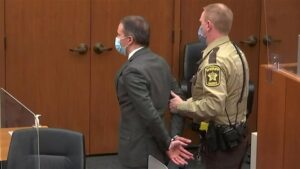 Chauvin’s trial for the murder of George Floyd began late last month and resulted in a guilty verdict this week. (Photo from NBC News)

On Tuesday afternoon, the jury in the Derek Chauvin trial found the former police officer guilty on all three charges relating to the heinous murder of George Floyd back in May of 2020. Chauvin is now due to be sentenced in approximately two months’ time around mid-late June. Jurors deliberated for a mere ten hours before rendering an overwhelming guilty verdict in the high-profile case which elicited outrage and sparked months of widespread nationwide demonstrations regarding the issue of police brutality. Analysts point to the video footage of the abhorrent incident as a watershed moment in much of the nation’s perception towards the problem, with it helping to illustrate how African-American men and women are often mistreated at the hands of law enforcement. Social justice advocates are hopeful that the verdict in the landmark case will serve as a positive precedent for increased accountability towards perpetrators of police brutality and the lethal use of force against unarmed civilians, particularly people of color who have fallen victim to these crimes at disturbing levels. 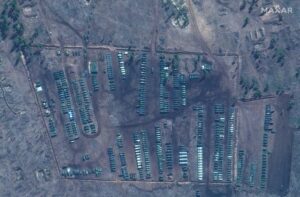 Moscow initiated a massive build-up of forces near the Ukrainian border. (Photo from Maxar/AP)

After international outcry over its actions, Russia has begun withdrawing troops from its border region with Ukraine. In the last few days, Russia had built up its forces in Crimea, near the Ukrainian border, citing military exercises in the Black Sea. The massive troop build-up was the largest ever Russian military deployment in the region, according to European Union foreign policy chief Josep Borrell. The United States, United Kingdom, and European Union had all issued statements calling for restraint, and criticized the aggressive and bellicose actions of the Kremlin. Russia argued that the military build-up in Crimea was solely to test the combat readiness of its armed forces, and defense minister Sergei Shoigu claimed that he withdrew many of the amassed units after “being convinced of their capabilities.” Russia had been threatened with sanctions and other retaliation had any offensive been launched against Ukraine. The American ambassador to Russia, John Sullivan, also returned to the United States for consultations, indicating the Biden administration’s increased attention to the situation.