Welcome to our NIF Newsletter. In this week’s headlines: the 10-year anniversary of the crackdown on pro-democracy protests in Bahrain passes, members of the Kurdistan Workers’ Party (PKK) execute 13 Turkish hostages in northern Iraq, the military in Myanmar engages in serious human rights violations against protesters while the United States places sanctions on officials there who orchestrated the recent coup, and the arrest of Disha Ravi in India sparks outrage and fuels concerns regarding the Modi government’s continued attempts to silence activists and suppress dissent. 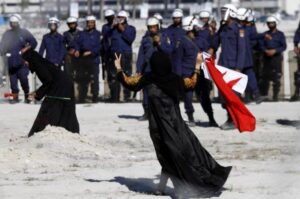 The 10-year anniversary of the 2011 pro-democracy protests in Bahrain was marked by small demonstrations. (Photo from Getty Images)

Sunday of this week marked the 10-year anniversary of the mass pro-democracy protests in Bahrain. Small gatherings took place to highlight the milestone, but the number of people was limited due to COVID-19 restrictions and a heavy police presence. Back in February of 2011, tens of thousands of people took to the streets to demand an elected government and other reforms, temporarily threatening the monarchy’s grip on power before a deadly crackdown. The demonstrations were largely attended by the country’s Shia-majority citizens, who have long accused the Al Khalifa monarchy of political persecution. However, the movement was swiftly crushed weeks later after the ruling family brought troops from the neighboring Gulf states of Saudi Arabia and the United Arab Emirates to protect its regime at the height of the uprising’s momentum in mid-March 2011. The monarchical Bahraini government unleashed a brutal suppression campaign to quell the protests, and as a result, thousands of activists in the country were arrested or injured. 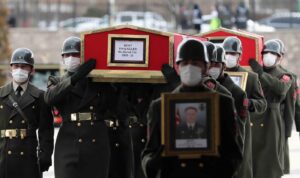 13 Turkish service members held hostage were executed by the PKK in a cave in northern Iraq. (Photo from AFP)

Kurdish guerillas belonging to the Kurdistan Workers’ Party, or PKK, executed 13 Turkish hostages in northern Iraq after Turkey initiated a rescue mission to free them. The hostages had been held for between five and six years, having been abducted by the PKK after peace negotiations between the group and the Turkish government broke down. The PKK released a statement saying that the hostages had been killed during Turkish aerial attacks preceding the failed rescue mission, but autopsies revealed that the prisoners had been shot. In the aftermath of the executions, the Turkish authorities detained over 715 people who allegedly had ties to the PKK. The PKK is considered a terrorist organization by Turkey and the United States, and its political wing has been banned by Turkey. 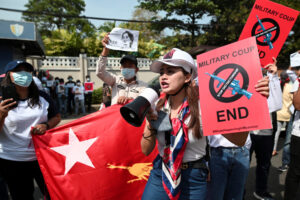 Large-scale demonstrations against the recent military coup have continued across the country. (Photo from Reuters)

The military in Myanmar has intensified its brutal crackdown on anti-coup protesters, with security forces being accused of engaging in serious human rights violations against demonstrators. Reports have emerged detailing the indiscriminate use of excessive force and how hundreds of people are currently being detained without proper charge. There have also been widespread accounts of nighttime raids and arrests in residential areas across the country as the military attempts to round up citizens that have expressed opposition to the recent coup. Last week, the United States placed sanctions on officials who orchestrated the February 1st action which deposed Myanmar’s elected civilian government. Despite this, the coup leaders have leveled new charges against ousted and detained former State Counsellor Aung San Suu Kyi in a move aimed at holding her indefinitely without trial and solidifying their grip on power.

Arrest of Disha Ravi in India 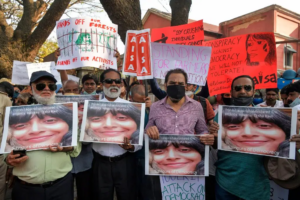 One of India’s leading climate activists was arrested by the government over her alleged role in inciting violence during the recent protests in the country. Disha Ravi, a 22-year-old climate change advocate, was charged with sedition for sharing a toolkit outlining methods of support for ongoing farmers’ protests in India. The toolkit is a publicly available online document that provides a list of ways supporters of the protests can help. Ravi is alleged to be one of the original authors and disseminators of the document, a charge which she denies. The Indian government has also intentionally misconstrued the document as a way for miscreants to create trouble, which led to the steep charge of sedition being leveled against her. Ravi’s detention has raised more concerns regarding human rights in India, where the Modi government already faces strong criticism over their treatment of ethnic and religious minorities.