Welcome to our NIF Newsletter. In this week’s headlines: new Secretary of State Antony Blinken gives his first interview since taking office and touches on subjects including the United States’ relationship with China and Saudi Arabia in the face of major human rights concerns, the U.S. calls for foreign fighters to leave Libya as the U.N. announces candidates for the transitional government, Italy permanently blocks arms sales to Saudi Arabia and the United Arab Emirates over their involvement in the devastating conflict in Yemen, and the military in Myanmar seizes power in a coup as State Counsellor Aung San Suu Kyi is detained. 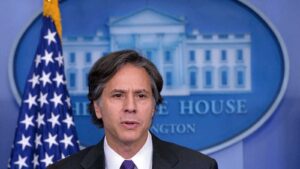 Blinken discussed a range of topics in his first interview since taking office. (Photo from Getty Images)

On Monday, new Secretary of State Antony Blinken gave his first interview since taking office and touched on a variety of subjects. The topics discussed included the United States’ relationship with China and Saudi Arabia in the face of major human rights concerns, as well as criticism of the Russian government over the recent detainment of opposition leader Alexei Navalny. Secretary Blinken called China the most significant ongoing challenge to the United States because of the countries’ multifaceted relationship. He also addressed nuclear policy, saying the Biden administration would be conditionally willing to rejoin the Joint Comprehensive Plan of Action (JCPOA) with Iran, and wanted to work with allies to limit North Korea’s nuclear capacity. Blinken was also asked about the human rights records of several U.S. allies, specifically Saudi Arabia, to which he replied it was vital for the Biden administration to ensure that allies were working in a manner consistent with American values.

Latest on the Libyan Transitional Government 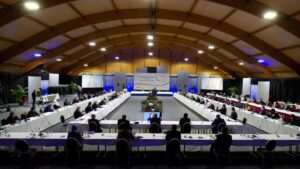 The Libyan Political Dialogue Forum is currently being held to select officials for the transitional government. (Photo from Reuters)

U.S. Calls for Foreign Fighters to Leave Libya as the U.N. Announces Candidates for the Transitional Government

In recent days, the United States has added to the chorus of voices calling for the immediate withdrawal of foreign forces from Libya. Meanwhile, Libyan delegates at United Nations-backed talks in Switzerland held the first round of voting this week to select officials for the transitional government which will oversee the country until national elections at the end of this year in late December 2021. The 75 participants at the Libyan Political Dialogue Forum cast their initial ballots on a list of agreed-upon candidates, and with none meeting the required threshold of 70% of votes, the process has now moved to a second round of voting. Delegates at the forum have until Friday to select from the candidates vying for the position of interim prime minister and for the three-person presidency council. In addition to leading Libya for the time being, the transitional government will also prepare the country for the upcoming national elections at the end of this year.

Arms Sales to Saudi Arabia and the UAE 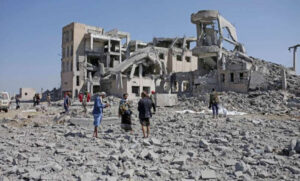 The ongoing conflict in Yemen has ravaged the country and resulted in the world’s worst humanitarian crisis, according to the United Nations. (Photo from AP)

This past week, Italy’s Foreign Ministry announced that it would be permanently blocking the sale of thousands of arms to Saudi Arabia and the United Arab Emirates over the two nations’ involvement in the devastating conflict in Yemen. Back in 2019, Italy was one of several European countries to freeze arms sales to Saudi Arabia and this most recent move makes the previously temporary suspension permanent. The action also follows the decision undertaken by the new Biden administration in the United States to suspend arms shipments to both Gulf countries while a review of the exports is conducted. Rights groups and activists have praised the significance of this latest series of moves which help set an important precedent for others to follow. The regimes in Saudi Arabia and the United Arab Emirates are major culprits in the perpetuation of the ongoing conflict in Yemen, which has had a calamitous effect on the country’s civilian population, resulting in an estimated 80% of them in need of humanitarian aid and assistance. 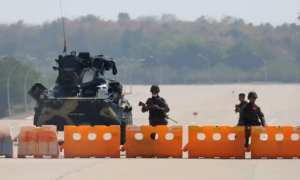 Myanmar’s military chief is already under international sanctions and has been heavily condemned for his role in the Rohingya genocide. (Photo from Reuters)

Former Nobel prize winner and current leader of Myanmar Aung San Suu Kyi was detained by the military earlier this week as the armed forces executed a coup against the civilian government. Suu Kyi, who spent years under house arrest before rising to become the de facto leader of Myanmar’s civilian government, led her party to election success in the country’s most recent vote. However, the military has seized upon unfounded allegations of voter fraud to overthrow the civilian government and take control. In addition to Suu Kyi, the military detained dozens of politicians from her National League for Democracy (NLD) Party, including Myanmar’s President Win Myint. Myanmar’s military, called the Tatmadaw, has a long history of oppression, most recently making headlines for an ethnic cleansing campaign of the country’s Rohingya Muslim minority.