Welcome to our NIF Newsletter. In this week’s headlines: fallout over the insurrection at the Capitol continues as the House mulls articles of impeachment and the invoking of the 25th amendment as two potential methods for removing President Trump from office, international aid organizations warn that the Trump administration’s decision to designate the Houthis as a terrorist group could exacerbate the humanitarian crisis in Yemen, Israel rejects the World Health Organization’s request to provide COVID-19 vaccinations to Palestinian medics, and the United Kingdom is set to outlaw the importation of Chinese goods with links to human rights abuse violations.

Fallout Over the Insurrection at the Capitol 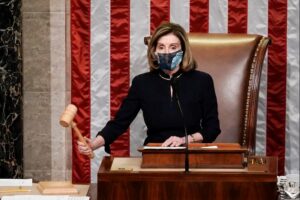 This week, Trump became the first U.S. president in history to be impeached twice. (Photo from AP)

As his first and final term nears its official conclusion next Wednesday, President Trump has made the dubious distinction of becoming the first president in American history to be impeached twice. The U.S. House of Representatives moved forward with impeachment after Vice President Mike Pence refused to invoke the 25th Amendment to remove the president from office over his role in inciting the insurrection at the U.S. Capitol last week. House Speaker Nancy Pelosi had previously given Vice President Pence an ultimatum to invoke the 25th Amendment, which he rejected, saying that removing the president from office with so little time remaining in his term would only serve to further divide the country. The House voted in favor of impeachment by a margin of 232-197, and 10 Republicans broke with the party to vote alongside Democrats in favor of impeachment. The process will now move to the Senate, where a trial is expected to begin around the time the chamber returns to session on January 19th, but which will not be concluded until after Trump is out of office.

Designation Against the Houthis in Yemen 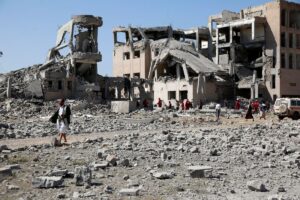 There is a fear that the designation will worsen the ongoing humanitarian crisis in Yemen. (Photo from Anadolu Agency)

In a move announced this week, the Trump administration designated Yemen’s Houthi movement as a terrorist organization, which aid groups and non-governmental organizations (NGOs) have warned could seriously exacerbate the ongoing humanitarian crisis in Yemen. Secretary of State Mike Pompeo notified Congress of the State Department’s decision in the dead of night on Sunday, January 10th during his last days in office, sparking legitimate concern and anger from lawmakers in both political parties regarding how it will negatively impact an already bleak humanitarian situation. Houthi rebels are in de facto control of up to 70% of Yemen in opposition to an exiled government that is backed by the regimes in Saudi Arabia and the United Arab Emirates. The Houthis have control over the activities of international financial institutions, aid organizations, and NGOs in Yemen, all of which provide desperately needed humanitarian assistance. The designation of the Houthis as a terror group could jeopardize the aid being provided there, as international organizations would expose themselves to legal risk by working with them under the new classification. 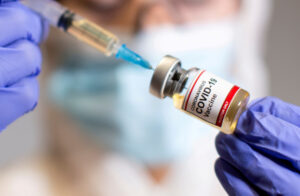 Human rights groups have criticized Israel for its unjust rollout of the COVID-19 vaccine. (Photo from Reuters)

In one of the latest developments highlighting its inequitable rollout of the COVID-19 vaccine, Israel has rejected the World Health Organization’s (WHO) request to immediately provide it to Palestinian medical and health workers. Overall, Israeli authorities have been criticized for their unjust vaccine distribution program, administering doses to Jewish settlers but failing to do so for Palestinians living under illegal Israeli occupation in the West Bank. Human rights groups have strongly condemned these actions and outlined that Israel is eluding its responsibilities as an occupying force through this blatant discrepancy regarding who is given access to the COVID-19 vaccine. Amnesty International, for example, released a statement saying in part that the vaccine program demonstrates the institutionalized discrimination which defines the Israeli government’s policy towards Palestinians. Ultimately, while Israel boasts of becoming the world leader in vaccinations per capita, it neglects to take into account the millions of Palestinians living under illegal Israeli occupation who have yet to secure their first doses. 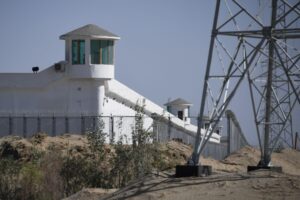 The move comes in light of evidence of Uyghur Muslims being forced to produce cotton. (Photo from AFP)

This week, the United Kingdom announced that it will ban Chinese imports linked to serious human rights violations. The move comes in light of disturbing new evidence regarding the forced labor of Uyghur Muslims in China’s Xinjiang region. The United Kingdom’s Foreign Secretary Dominic Raab revealed the measures which are aimed at addressing the grave abuses that Chinese authorities are accused of committing against the country’s Uyghur minority. Under the new rules, British companies will face fines unless they fulfill the government requirement of demonstrating that their supply chains are free from forced labor. International rights groups have monitored the widespread violations, particularly in Xinjiang, determining them to be part of a systematic crackdown and also concluding that the Chinese justice system remains plagued by unfair trials, torture, extensive and arbitrary use of the death penalty, and other forms of ill-treatment for those in detention.