Welcome to our NIF Newsletter. As we approach 2021, we would like to wish everyone a Merry Christmas and a Happy New Year! In this week’s headlines: journalists’ phones are targeted by the spyware of an Israeli firm with links to a long list of past human rights violations, thousands of Sudanese protesters take to the streets to demand an acceleration of government reforms on the second anniversary of the uprising which ousted former despot Omar al-Bashir, outgoing Attorney General Bill Barr unveils new charges in the Lockerbie bombing, and the United States issues fresh sanctions against Syrian regime officials and entities. 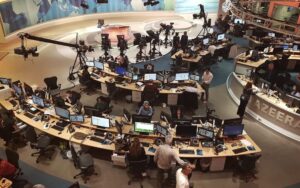 Dozens of journalists had their cell phones targeted by spyware in a recent hacking operation. (Photo from AP)

Dozens of journalists, executives, and producers at the Qatar-based Al Jazeera media organization had their personal cell phones hacked with spy software developed by Israeli surveillance firm NSO Group, in an operation widely attributed to the governments of Saudi Arabia and the United Arab Emirates. In total, upward of 35 Al Jazeera employees had their electronic devices compromised. NSO Group has been frequently connected to high-profile cases of serious human rights violations which have raised questions over the future of the company’s spyware. NSO’s product has been used to target independent journalists in Morocco, political dissidents in Rwanda, pro-democracy actors in Togo, and opposition politicians in Spain, in addition to its connection to the Khashoggi murder and the latest hacking of Al Jazeera journalists. The regimes in Saudi Arabia and the United Arab Emirates have long-standing issues with Al Jazeera, primarily for the organization’s reporting on the repressive governments around the Gulf. The hacking is the latest attempt by autocratic Gulf regimes in the Middle East to silence journalists, following upon the murder of Jamal Khashoggi by Saudi operatives two years ago in October of 2018. 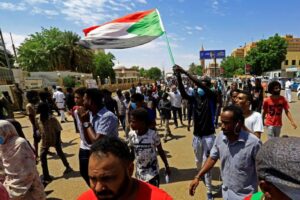 Sudan’s uprising movement against the country’s former dictator began in December of 2018 and led to his later removal from power. (Photo from Reuters)

Recently, thousands of Sudanese protesters took to the streets to demand an acceleration of government reforms on the second anniversary of the uprising which ousted former despot Omar al-Bashir. The movement against the autocrat’s three-decade rule began back in December of 2018 and resulted in his ultimate removal from power months later in April of 2019. Following the deposition of al-Bashir, a transitional government was formed between military and civilian groups which has promised to fix the country’s struggling economy and provide a bridge towards fair presidential and parliamentary elections. However, many citizens are dissatisfied with the slow pace of change under the transitional government. As such, the demonstrators have voiced their desire for several key elements including the speedy formation of a legislative body, holding those responsible for killing protesters during the uprising accountable, and the implementation of much-needed economic reforms.

New Charges in the Lockerbie Bombing 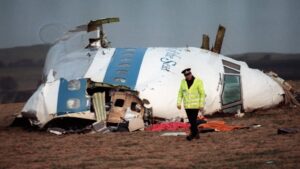 Barr announced charges against a third individual thought to be behind the bombing of Pan Am Flight 103. (Photo from Getty Images)

In one of his final acts as Attorney General, Bill Barr unveiled criminal charges against a former Libyan intelligence officer involved in the 1988 bombing of Pan Am Flight 103 over Lockerbie, Scotland. The bombing killed 270 people, including 190 Americans, and is the second deadliest air attack in U.S. history. Abu Agila Mohammad Masud has been charged with terrorism-related crimes in relation to the bombing, in light of new evidence turned over to the FBI by Libyan authorities. Masud is accused of planting the bomb and setting a timer for it to explode while the plane was in flight. He allegedly admitted to his role in the attack while being interrogated by Libyan authorities following his arrest after the Qaddafi government was overthrown. Masud becomes the third individual charged in relation to the Pam Am flight, although the prior two suspects never faced justice due to the Libyan government under Muammar Qaddafi shielding them from extradition.

Fresh Sanctions Against the Syrian Regime 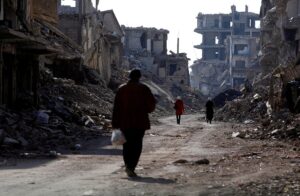 The Syrian conflict has had a devastating effect on the country’s civilian population. (Photo from Reuters)

This week, the United States imposed new sanctions against various Syrian regime officials and entities including its central bank and Asma al-Assad, the wife of autocrat Bashar al-Assad. Overall, the U.S. Treasury Department’s Office of Foreign Assets Control (OFAC) added two individuals, nine business entities, and the Central Bank of Syria to the Specially Designated Nationals and Blocked Persons List. The fresh measures were introduced almost exactly one year after outgoing President Trump signed the Caesar Act into law back in December of 2019. The aforementioned legislation allowed for punitive economic sanctions to be implemented against individuals and businesses who provide funding or assistance to the Syrian regime. The latest round of sanctions also comes close to the five-year anniversary of the United Nations Security Council unanimously adopting Resolution 2254, which endorsed a road map for the peace process in Syria. The conflict in Syria has been ongoing since 2011, when the Assad regime brutally cracked down on pro-democracy protesters, and has seen hundreds of thousands killed and millions more displaced.