Welcome to our NIF Newsletter. In this week’s headlines: French President Macron meets with Egyptian autocrat el-Sisi and controversially pledges to continue selling arms despite alarming concerns over the latter’s human rights violations, Saudi Prince Turki al-Faisal criticizes the Israeli government’s treatment of Palestinians during a summit in Bahrain, the United States imposes sanctions on Chinese officials for their disqualification of elected opposition legislators in Hong Kong, and Israel moves towards a possible fourth election in less than two years as a preliminary bill is passed to dissolve the Knesset. 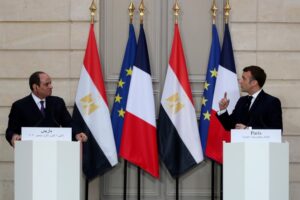 Macron was criticized for pledging to continue selling arms to el-Sisi irrespective of grave human rights abuses. (Photo from AP)

This week, French President Emmanuel Macron met with authoritarian Egyptian leader Abdel Fattah el-Sisi and controversially pledged to continue selling weapons despite growing concerns over the latter’s major human rights violations. Macron welcomed el-Sisi to Paris for bilateral talks that focused on counterterrorism and instability in the Sahel amid widespread condemnation of the Egyptian autocrat for his government’s repression of human rights. Prior to the meeting between the two, dozens of international rights organizations condemned Macron’s policy of turning a blind eye toward el-Sisi’s human rights abuses. Observers have noted that Macron’s dealings with el-Sisi are similar to the stance he adopted toward warlord Khalifa Haftar during his attempts to overthrow the legitimate and internationally-recognized Libyan government. In both cases, analysts rightfully point out the hypocrisy of the French president for cozying up to human rights violators abroad while at the same time lecturing citizens domestically about the importance of respecting freedoms and civil liberties. 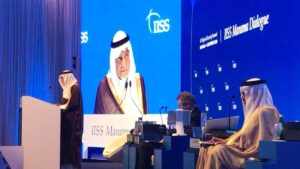 Saudi Prince Turki al-Faisal made the comments during a recent summit in Bahrain. (Photo from IISS)

A prominent Saudi prince strongly criticized Israel this week over the country’s treatment of Palestinians and other issues during a conference in Bahrain. Prince Turki al-Faisal, who previously served as the kingdom’s ambassador to the United States and United Kingdom, called out Israel for operating as a de facto apartheid state and accused it of being a Western colonizing power. Al-Faisal was speaking at the International Institute for Strategic Studies in Manama, where Israeli Foreign Minister Gabi Ashkenazi was also in attendance. Al-Faisal also subtly spoke out against some of Saudi Arabia’s regional allies for normalizing relations with Israel without fair concessions being made to the Palestinians. These normalization deals, dubbed the Abraham Accords, have only served to perpetuate the status quo, where Israel continues to oppress Palestinians without repercussions. 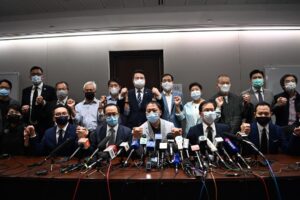 A slew of pro-democracy legislators in Hong Kong resigned in solidarity with their disqualified colleagues. (Photo from AFP)

Earlier this week, the United States imposed financial sanctions and a travel ban on 14 Chinese officials for their role in disqualifying several elected opposition legislators in Hong Kong last month. The Beijing-backed government in the special administrative region (SAR) had expelled the opposition members from its legislature after city authorities there were given new powers to curb any form of perceived dissent. The move prompted a slew of pro-democracy legislators in the territory to resign in solidarity with their disqualified colleagues. The sanctions against the targeted Chinese officials will prohibit them and their immediate family members from traveling to the United States, and will also freeze any assets they might have in the country and prevent American companies from dealing with them. The Chinese government has vowed to retaliate against the measures, calling them “malicious actions by the U.S. to safeguard our sovereignty, security, and developmental rights.” However, observers note that the sanctions are justifiable considering that the central government in Beijing has blatantly ramped up its efforts to repress pro-democracy voices in Hong Kong – particularly in the aftermath of the controversial national security law that was implemented earlier this year. 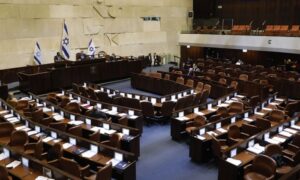 Israel’s Knesset voted to dissolve itself and call for fresh elections. (Photo from Getty Images)

Israel is likely heading toward a fourth election in less than two years following the passing of a motion to dissolve the Knesset. The Knesset, Israel’s parliamentary body, voted 61-54 in favor of a motion presented by the opposition to dissolve itself. The motion then advanced into committee for debate, where it passed 10-7. The Knesset House Committee has set March 16th as a target date for new elections. The vote passed in part due to the breakdown of the relationship between the two main ruling parties in Israel’s coalition government. The Likud Party and the Blue and White Party formed a coalition last year after three elections failed to give one party a majority, although the two have been at loggerheads since the moment the government was formed.