Welcome to our NIF Newsletter. In this week’s headlines: human rights organizations and a bipartisan group of lawmakers urge Congress to oppose arms sales to the United Arab Emirates, Israel is blamed for assassinating the head of Iran’s nuclear program, Ethiopian Prime Minister Abiy Ahmed states that government forces have taken control of the Tigray region’s capital city, and Jared Kushner leads a White House delegation to Qatar and Saudi Arabia. 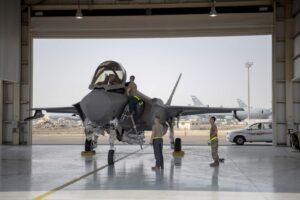 There is a fear that the arms sales would exacerbate the humanitarian crises in Yemen and Libya. (Photo from AP)

Nearly 30 human rights organizations have signed a letter urging Congress to block the sale of missiles, fighter jets, and drones to the United Arab Emirates due to concerns regarding the Gulf nation’s role in the Yemen and Libya conflicts. The regime in the United Arab Emirates has served as a destabilizing force in the two aforementioned countries and been credibly accused of engaging in war crimes and serious abuses against the respective civilian populations. As a result, there is a legitimate fear that the arms sales would exacerbate the humanitarian crises in Yemen and Libya. A bipartisan group of U.S. lawmakers in both the Senate and House, including Republican Senator Rand Paul and Democratic Congresswoman Ilhan Omar, have also previously expressed opposition to the weapons sales. To stop the sale from moving forward however, the resolutions introduced against them would need to pass both chambers of Congress and also require a two-third majority in order to survive a veto from lame-duck President Trump. Regardless, opponents of the arms sales argue that their efforts at least send an important signal to the incoming Biden administration which highlights the diverse array of unease over the issue. 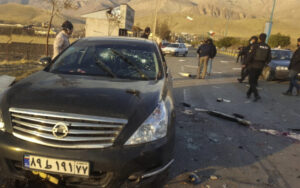 Fakhrizadeh’s car was fired on while traveling through a small town east of Tehran. (Photo from AP)

Late last week, Iran’s top nuclear scientist was assassinated in an attack widely attributed to Israel. Mohsen Fakhrizadeh was killed while he was traveling outside of the capital Tehran and his convoy was ambushed. American and Israeli intelligence had long indicated that Fakhrizadeh was the man behind Iran’s nuclear program and the lead engineer on a project that sought to design an atomic warhead. Fakhrizadeh was involved with Iran’s formulative attempts to create a nuclear weapon, and despite these endeavors being halted in 2003, he had continued his work on what Iran described as peaceful nuclear development. Israel declined to take credit for the attack, but it came after a high-level meeting in Riyadh between Israeli Prime Minister Benjamin Netanyahu, Mossad head Yossi Cohen, U.S. Secretary of State Mike Pompeo, and Saudi Crown Prince Mohammed bin Salman. Among other topics, it was reported that Iran was a focal point of the discussion. Analysts argue that the assassination of Fakhrizadeh was cynically intended to escalate hostilities with Iran prior to President-elect Biden taking office and be a significant setback for the incoming administration, which had made clear it was seeking to repair relations between the United States and Iran.

Latest on the Tigray Conflict 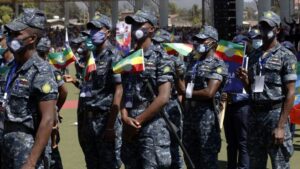 Fighting between federal government forces and the TPLF has created a major humanitarian crisis. (Photo from Getty Images)

In one of the latest developments in the ongoing Tigray conflict, Ethiopian Prime Minister Abiy Ahmed stated that the military has gained control over Mekelle – the capital city of the Tigray region. Federal government forces have been engaged in weeks-long fighting with the local Tigray People’s Liberation Front (TPLF). The conflict is rooted in disagreement between the two entities regarding each other’s legitimacy, and has come to the fore particularly since 2018 when Ahmed ascended to power and the TPLF lost much of its influence over national politics. The recent wave of violence has created a major humanitarian crisis in the country with thousands of civilians requiring aid and others also fleeing to neighboring countries like Sudan. Just this week, international aid groups announced that they had finally obtained sustained and secure access to the Tigray region in order to be able to provide their services to civilians in need. The positive news comes at a critical time as the region has been hampered by shortages of food, medicine, and other supplies in the aftermath of the fighting breaking out back in early November.

Kushner led a White House delegation to the Middle East this week. (Photo from AP)

Senior White House advisor Jared Kushner traveled to the Middle East this week for talks with Saudi Arabia’s crown prince and Qatar’s emir. Kushner is accompanied by U.S. International Development Corporation executive Adam Boehler, and Ari Berkowitz and Brian Hook, both of whom are envoys to the Middle East. Media outlets reported that the delegation led by Kushner would be discussing ending the Saudi-led economic boycott of Qatari goods. Saudi Arabia, Bahrain, Egypt, and the United Arab Emirates cut ties with Qatar in 2017 as part of a political row over the country’s alleged links to terrorism, something that the Qatari government has repeatedly and definitively denied. It is also suspected that Kushner’s delegation could be pursuing additional normalization agreements with Israel before the outgoing Trump administration leaves office.