Welcome to our NIF Newsletter. In this week’s headlines: The Trump campaign files multiple lawsuits contesting the 2020 presidential election results, Armenia and Azerbaijan sign a Russia-brokered peace deal regarding the region of Nagorno-Karabakh, and a look at the updated numbers in President-elect Biden’s victory over President Trump as a few uncalled states like Arizona and Georgia work to finalize their vote tabulations. 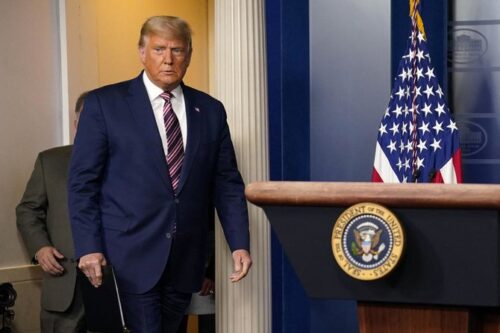 Trump has instructed his campaign to pursue an array of legal challenges regarding his defeat to President-elect Biden. (Photo from AP)

Over the past week, the Trump campaign has filed a variety of lawsuits in several battleground states in an attempt to challenge the results of the 2020 presidential election. President-elect Biden was declared the winner on Saturday after surpassing the 270 electoral college votes needed to secure the presidency. In Pennsylvania, the state which clinched Biden’s victory, Trump’s team has pushed unfounded allegations of fraud regarding election officials’ tabulation of legally cast ballots in the days following Election Day despite the fact that this was anticipated to take additional time due to the large number of mail-in ballots this year because of the ongoing coronavirus pandemic. They have also pursued legal challenges in other states including Nevada, Arizona, Georgia, and Michigan, where the courts have denied the campaign’s request to delay the certification of election results and debunked claims that Republican ballots were tampered with or improperly counted. Ultimately, the Trump campaign has failed to provide substantiated evidence to support their range of voting irregularity accusations, and simply put, legal analysts have likened their litigation efforts to “throwing everything at the wall to see if anything sticks.” Free and fair elections are at the core of American democracy and therefore impartial observers lament Trump’s desperate attempts to undermine the nation’s faith in our electoral system.

The hope is that the peace deal in Nagorno-Karabakh will put an end to months of renewed clashes in the region. (Photo from Getty Images)

A peace treaty has been signed to end the fighting between Armenia and Azerbaijan in the contentious region of Nagorno-Karabakh. The deal was brokered by Russia, and is widely seen as a victory for Azerbaijan. Under the terms of the agreement, Armenian military forces will immediately leave Nagorno-Karabakh and be replaced by Russian peacekeepers. The deal allows Azerbaijan to reclaim territory that it owned under international law, but had been under the de facto control of Armenia since the 1992 war between the two countries over the region. It also gives Armenia and Azerbaijan control of the territory each secured during the recent clashes, which benefits the latter. In the aftermath of the agreement being reached, furious Armenians stormed the country’s parliament demanding they continue to fight while in contrast, Azeri citizens took to the streets to wave Azerbaijan’s flag and sing the national anthem. In the subsequent days leading up to the deal, the momentum in the conflict had tipped in favor of Azerbaijan, as the country’s forces captured the strategically vital town of Shusha and were poised to begin an assault on the largest city of Stepanakert. Small skirmishes had started to break out in the areas immediately surrounding Stepanakert, and Armenia’s prime minister said the military had warned him they would be unable to prevent the city from falling into Azerbaijani hands if a full-fledged attack was mounted. 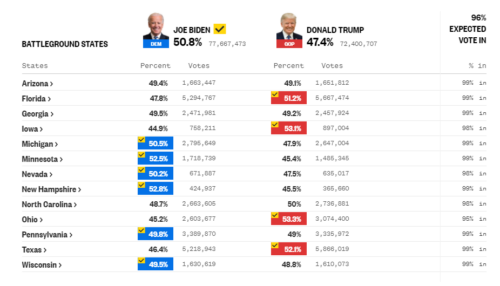 The 3 remaining uncalled states in the presidential election are Arizona, Georgia, and North Carolina. (Photo from NBC News)

A few states across the country have continued to finalize their vote tabulations from last week’s presidential election in preparation of the certification of results. The uncalled battleground states of Arizona, Georgia, and North Carolina are nearing the completion of counting all of their ballots, while Alaska recently became the latest state in the race to be called, with its three electoral votes being awarded to President Trump. Due to the relatively close margin between the two candidates there, the state of Georgia is planning on conducting a by-hand recount. In Arizona however, where President-elect Biden leads by a similar-sized advantage as he does in Georgia, the chances for a recount are slim because the state has a higher standard for triggering them – for this to happen the difference in the number of votes would have to be 0.1% or less which is unlikely considering that Biden leads by around 0.3% with the count nearly finished. In the end, the recounts are not expected to change the outcomes in any of the statewide races since the gap between President-elect Biden and President Trump is in the tens of thousands in even the tightest margin ones.