Welcome to our NIF Newsletter. This week, we analyze the outcome of the presidential, Senate, House, and gubernatorial races here in the United States. In the headlines from these elections: former Vice President Joe Biden and Senator Kamala Harris are declared president-elect and vice president-elect, the balance of the Senate appears likely to be determined by two runoff Georgia races in January 2021, Democrats’ majority in the House of Representatives slims after Republicans make gains, and 11 states hold gubernatorial contests with party control only flipping in Montana. 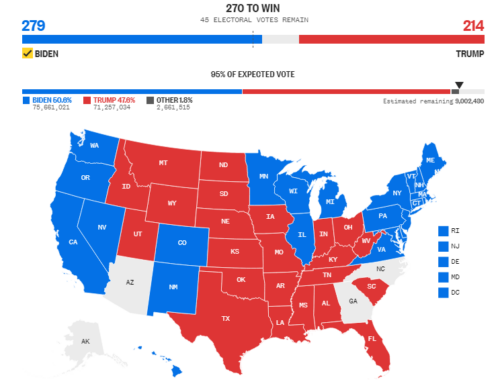 Former Vice President Biden has surpassed the 270 electoral college votes needed, and has been declared president-elect of the United States. (Photo from NBC News)

On Saturday, Democratic nominee Joe Biden was named President-elect of the United States after securing 270 electoral college votes in the 2020 presidential election. Biden, the former vice president, and his running mate, Vice President-elect Kamala Harris, are slated to take office on January 20th, 2021. Biden was victorious in his campaign for the White House on the third attempt, having previously ran for president in 1988 and 2008. His last stint in public office was as President Barack Obama’s vice president from 2008-2016, and served before that as a U.S. Senator from Delaware. Biden officially surpassed the 270 electoral college votes needed on Saturday following several days of continuing vote tabulations when he was projected to be the winner in the critical battleground state of Pennsylvania. Analysts had anticipated that an outcome in the presidential race may not be known on Election Day itself, considering the large number of mail-in ballots this year because of the ongoing coronavirus pandemic.

Overall, the 2020 election had the highest voter turnout in over a century, with both candidates netting over 70 million votes. So far, President-elect Biden has secured over 75,600,000, with President Trump winning over 71,200,000. In the all-important electoral college, Biden successfully rebuilt the “blue wall,” a coalition of swing states including Pennsylvania, Michigan, and Wisconsin, that have previously been key to catapulting Democratic candidates to the White House. Biden was also able to compete in battleground states that President Trump won in 2016, such as Arizona and Georgia, and the former vice president currently maintains leads in both of those states as well. For his part, President Trump won both Florida and Ohio, two states that his campaign had identified as being key to potentially winning re-election.

Despite President-elect Biden reaching the milestone of 270 electoral college votes, President Trump has indicated he won’t concede defeat without a legal fight. The president has baselessly claimed that voter fraud is rampant in mail-in and absentee ballots, and has vowed to challenge the outcome of the race in several states, including Georgia, Pennsylvania, Wisconsin, and Nevada. These legal challenges will play no role in altering the outcome of the race, although it is within the president’s right to request an investigation. Legal challenges and recounts over vote counts are not unheard of, however, President-elect Biden’s advantage in the contested states is in the tens of thousands and historically – even at best – recounts only affect the margin by a few hundred votes, if any.

Senate Majority Hangs in the Balance 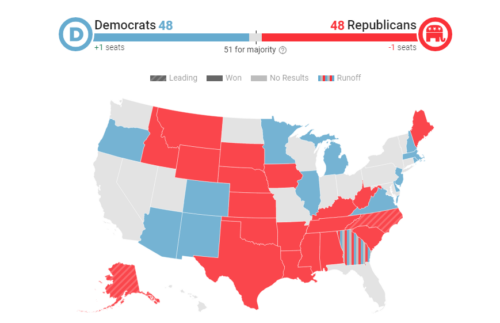 The majority party in the Senate appears set to be determined by two runoff Georgia elections. (Photo from Vox)

With most Senate races decided, the majority in the upper chamber still hangs in the balance. Going into Election Day, Republicans held a slim advantage of three seats. Democrats hoped to flip the Senate and propel themselves into the majority, primarily through winning seats in swing states such as Colorado, Arizona, and North Carolina. Democrats had also hoped they would be able to flip the seats of long-serving Republican Senators such as Lindsey Graham and Susan Collins. Contrasting this, Republicans sought to defend their majority, and add to their caucus by winning back seats in traditionally Republican states, such as Alabama. Between the two parties, Republicans will be happier with the outcome, as they protected their majority and outperformed expectations in swing states. However, the two senatorial races in Georgia appear likely to be the final determining factor regarding which political party holds the majority in the Senate, with both poised to go to a runoff in early January 2021. As such, the focus of the nation will descend upon Georgia over the next couple of months, with fundraising there expected to hit record levels in two runoff elections that will play a decisive role in the political landscape of the Senate.

Democrats are projected to maintain their majority in the House, but Republicans have picked up several seats. (Photo from 270towin.com)

In addition to the presidential election, the seats in the House of Representatives were also on the ballot this week. Democrats sought to extend their advantage in the chamber from the current 35-seat majority they have held since 2018, when a wave of Democratic candidates were elected halfway through President Trump’s first term. Republicans however, have made the argument that Democrats have failed to legislate effectively with their majority. Prior to the election, most polls indicated Democrats would be able to pick up several Republican seats, while defending the majority of their own. However, this has not occurred, as Republican candidates have defeated several Democratic incumbents, in addition to successfully defending the majority of their seats. Resultingly, the Democrats appear set to hold their majority in the House of Representatives, but their advantage has slimmed considerably, as Republicans have picked up multiple seats. 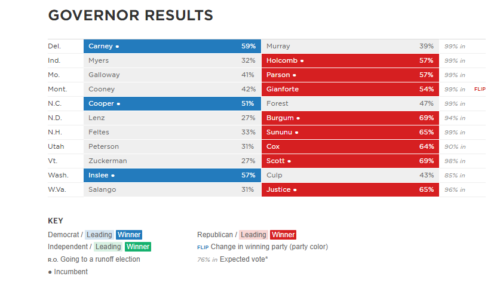 All governorships remained in the same party’s control, with the exception of Montana. (Photo from NPR)

Eleven states across the country held gubernatorial contests on Election Day, with the most competitive races occurring in Montana, Missouri, and North Carolina. The other states holding gubernatorial elections were Indiana, New Hampshire, North Dakota, Utah, Vermont, Delaware, Washington, and West Virginia. Among these states, Republicans won eight, and Democrats took the remaining three. The gubernatorial races across the country were largely seen as a referendum on governors’ handling of the coronavirus pandemic. Interestingly, no incumbent governors were defeated, and most of the races ended up being decided by a comfortable margin of victory. Only one state, Montana, saw a flip in party control of the governorship.