Welcome to our NIF Newsletter. In this week’s headlines: Sudan controversially normalizes relations with Israel in exchange for being removed from the United States’ list of state sponsors of terrorism, French President Emmanuel Macron is widely criticized for his insensitive remarks on Islam in the aftermath of the Samuel Paty killing, Libya’s internationally-recognized government signs a ceasefire agreement with renegade military commander Khalifa Haftar’s forces, and a referendum in Chile to rewrite the Pinochet-era constitution passes after months of protests. 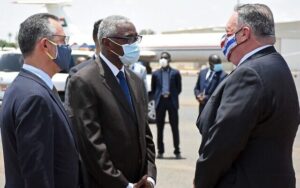 Foreign policy analysts lament that the Sudanese government was coerced into normalizing relations with Israel. (Photo from AFP)

Sudan Controversially Normalizes Relations with Israel in Exchange for Being Removed from the U.S. List of State Sponsors of Terrorism

Late last week, the announcement was made that Sudan would begin to normalize its relations with Israel, joining the United Arab Emirates and Bahrain as the third Arab country to do so in recent months. Analysts have lamented the problematic workings of the deal whereby Sudanese officials were coerced into the agreement in exchange for being removed from the United States’ list of state sponsors of terrorism. The Trump administration has been criticized for politicizing the Middle East peace process in the lead up to an election, taking part in efforts to strike these agreements by whatever means necessary and disregarding the longstanding position which calls for normalization to coincide with fair Israeli concessions to the Palestinians. These aspects, such as Israeli withdrawal from illegally-occupied Palestinian territory, are essential to achieving any genuine progress regarding the Middle East peace process and therefore any normalization agreements that are devoid of these elements will not help to address the core issues at the heart of the Israeli-Palestinian conflict. Like other general populations in the region, the commitment to a just resolution to the conflict is strong in Sudan, and as such the less than desirable terms of the normalization agreement were met with public protests and opposition.

Backlash Against Macron’s Remarks on Islam 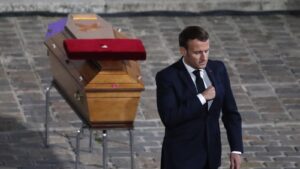 Macron has faced condemnation for his comments in the wake of the Paty killing. (Photo from AFP)

French President Emmanuel Macron has faced major backlash after he made insensitive comments toward Islam while attempting to defend France’s commitment to secularism. Earlier this month, Macron described Islam as a “religion in crisis,” and doubled down in the aftermath of the killing of Samuel Paty, a French teacher who was beheaded after showing caricatures of the Prophet Mohammed during a class on freedom of expression. Macron said France would “never give up” its cartoons, despite the offense they may cause to certain communities. Turkish President Recep Tayyip Erdogan questioned Macron’s mental health in response, and multiple Arab countries have begun boycotting French products. The murder of Mr. Paty was the latest example of Islam’s strict taboo on creating caricatures of the Prophet Mohammed coming to the fore in French society. Previously, back in 2015, the offices of satirical magazine Charlie Hebdo were attacked after the magazine published cartoons of the Prophet. 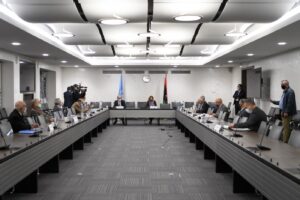 Libya’s warring parties have agreed on the terms for a permanent ceasefire. (Photo from AFP)

After nearly a decade of conflict, Libya’s warring factions have agreed on a ceasefire after rounds of negotiations with United Nations mediators in Geneva, Switzerland. The ceasefire was agreed upon between Libya’s internationally-recognized Government of National Accord (GNA) and Khalifa Haftar, a renegade military commander whose forces have controlled much of eastern Libya. The United Nations and both sides hailed the agreement as a “permanent ceasefire” to end the fighting in Libya. As part of the deal, all foreign fighters and mercenaries would have three months to leave the country. The presence of outside actors in Libya has greatly complicated the situation and pushed the country away from a democratic solution in the best interest of its citizens. With the ceasefire agreement, Libya’s opposing factions will seek to bring unity to a fractured nation that has been plagued by instability and unrest. Chileans overwhelmingly voted in favor of rewriting the country’s constitution. (Photo from Reuters)

Earlier this week, a referendum in Chile to replace the country’s military dictatorship-era constitution with a new one passed by a significant margin, as an overwhelming 78% of participants voted in favor of the motion. Back in November of last year, Chilean President Sebastian Pinera agreed to hold the referendum after widespread nationwide protests, including in the capital city of Santiago. The vote was a central demand of the continuous demonstrations and had originally been scheduled to take place in April, but was postponed until this month because of the coronavirus pandemic. The historic referendum also allowed Chileans to decide the type of entity that would be tasked with drafting the new constitution, with the majority supporting the election of a body of 155 citizens as opposed to a mixed one consisting of both lawmakers and citizens. This constituent assembly is slated to be elected in April 2021, and its members will then work to put together a new constitution to be submitted to Chilean voters in 2022.