Welcome to our NIF Newsletter. In this week’s headlines: The Supreme Court confirmation hearing process for Judge Amy Coney Barrett begins in front of the Senate Judiciary Committee, Armenia and Azerbaijan accuse each other of ceasefire violations in Nagorno-Karabakh, and a new aggravation of tensions arises with the Turkey-Greece maritime dispute in the Eastern Mediterranean. 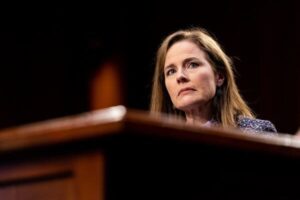 The Senate Judiciary Committee has deliberated this week on the nomination of Judge Amy Coney Barrett to the Supreme Court. Judge Barrett, who was nominated by President Trump following the passing of Justice Ruth Bader Ginsburg, clerked for the late Antonin Scalia and is similarly staunch in her conservative views. Democrats on the Judiciary Committee have expressed their displeasure with Barrett’s rushed confirmation and asked for her to opine on issues such as abortion and health care. Conversely, Republican Senators have pointed to Judge Barrett’s exceptional qualifications for being appointed to the Supreme Court, and played down complaints from Democrats about the expediency of the process. Throughout the week, Judge Barrett has been asked to explain her views on hot-button issues and judicial norms such as marriage equality, stare decisis, health care, and severability, among others, which could shape the decisions made by the Supreme Court for decades to come. 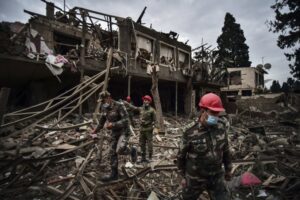 A humanitarian ceasefire was agreed upon this past weekend, however both sides accused each other of violating it and attacking civilian areas. (Photo from AP)

Not long after agreeing to a ceasefire in Nagorno-Karabakh this past weekend, both Armenia and Azerbaijan accused each other of violating the terms and carrying out attacks on civilian areas. Continued fighting has escalated fears of a larger-scale conflict that could further involve regional neighbors such as Turkey and Russia. The ongoing clashes have also heightened concerns regarding the safety of civilian populations, not only in the territory of Nagorno-Karabakh but additionally in nearby cities outside of but within close proximity to the region. Azerbaijan’s second-largest city of Ganja for example, located approximately 60 miles from Nagorno-Karabakh, was subjected to missile attacks which resulted in civilian fatalities. As the dangerous recent flare-up of the decades-old dispute carries into its third week, the Minsk Group has called on Armenian and Azeri leaders to implement the ceasefire in order to prevent “catastrophic consequences for the region” and international aid groups warn of a deteriorating humanitarian crisis on the ground. 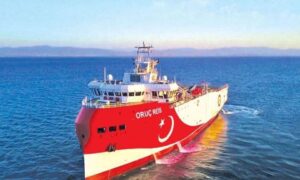 Tensions have again escalated between Turkey and Greece over a research mission in the Eastern Mediterranean. (Photo from Reuters)

Tensions have risen between Turkey and Greece again in recent days, after Turkey sanctioned a new naval mission to carry out seismic surveys in the Eastern Mediterranean. The Turkish exploration vessel, the Oruc Reis, will carry out seismic surveying near the Greek Isle of Kastellorizo, which is less than 600 kilometers from Turkish shores. Greece has called the exploration mission a serious provocation and called for the European Union to back it by immediately placing sanctions on Turkey. On the other hand, Ankara dismissed the threats from Athens, and said Turkey was operating within its continental shelf which gives it exclusive economic access. Turkey and Greece have been at odds recently over contested territory in the Mediterranean and the accompanying offshore drilling rights. The dispute between Turkey and Greece stems from differing understandings of each country’s maritime boundaries and exclusive economic zone (EEZ), as well as the status of Cyprus.