Welcome to our NIF Newsletter. In this week’s headlines: President Trump and former Vice President Biden face off in a chaotic first presidential debate as we approach the one-month milestone before the election, Armenia and Azerbaijan engage in heavy clashes over the disputed Nagorno-Karabakh region which incite fears of a wide-scale regional conflict, Turkish prosecutors indict six additional Saudi nationals for the October 2018 murder of journalist Jamal Khashoggi, and Palestinian President Abbas calls for an international conference early next year regarding the Middle East peace process. 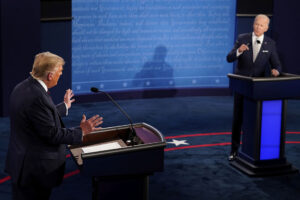 On Tuesday evening, Trump and Biden squared off in a disorderly and chaotic first presidential debate. (Photo from Getty Images)

With the presidential election just over 30 days away, President Trump and former Vice President Biden took part in the first presidential debate this week. Trump continues to trail Biden in the polls, and his campaign was relying on strong performances in the debates to erode Biden’s lead. However, observers noted that Trump’s demeanor was disorderly and overly confrontational, setting the tone for a chaotic debate, with both candidates frequently talking over each other and thus leaving the event difficult to follow at times. Some of the topics that moderator Chris Wallace asked the candidates questions on included health care, racial injustice, climate change, the Supreme Court, and the COVID-19 pandemic. Each candidate was allotted two minutes to respond to Wallace’s questions, and their time was supposed to be uninterrupted, as agreed upon by both campaigns prior to the debate. Despite this, both Trump and Biden began cutting across each other. President Trump was guilty of being more aggressive in interrupting Biden, and indeed he cut off the former vice president far more frequently than vice versa. At multiple times throughout the debate, the president’s behavior earned him a sharp rebuke from Wallace, who was forced at times to engage in a shouting match with Trump to allow Biden to finish his point. Two of President Trump’s own allies, former Senator Rick Santorum and former Governor Chris Christie, both criticized the president’s performance after the debate, saying that he had come out “too hot” and behaved in a manner unbefitting of the presidency. 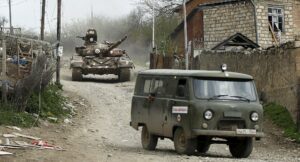 The disputed region of Nagorno-Karabakh is internationally recognized as part of Azerbaijan, but is controlled by ethnic Armenians. (Photo from Reuters)

Heavy clashes broke out earlier this week between Armenian and Azerbaijani forces in the contested region of Nagorno-Karabakh. The conflict is rooted in a decades-long dispute over Nagorno-Karabakh, an enclave that is internationally recognized as part of Azerbaijan, but which has been controlled by ethnic Armenians since it declared independence back in 1991. Although a ceasefire was agreed upon in 1994 following several years of armed conflict, Armenia and Azerbaijan frequently accuse each other of provocations around Nagorno-Karabakh and have been unable to formally resolve the dispute. Tensions had been escalating for months after border clashes in July, and have now boiled over into the heaviest fighting in years. The fear is that these clashes may not only devolve into a larger-scale war between Armenia and Azerbaijan, but also that they could spiral out of control and draw in neighboring countries such as Turkey, Russia, and Iran. Additionally, diffusing the situation and maintaining stability in the region is critical because it provides important transit routes for connecting oil and gas supplies to the world market. 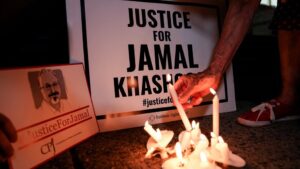 Turkish prosecutors this week have filed additional indictments against six Saudi nationals accused of being involved in the October 2018 murder of U.S. resident and Saudi dissident Jamal Khashoggi in Istanbul. Turkey’s Anadolu state news agency said that two of the suspects were facing life sentences, with the other four facing up to five years in jail. The two individuals facing life sentences were staff members at the Saudi consulate in Istanbul, and the other four are alleged to have traveled to Turkey after the murder to help clean the crime scene. None of the accused are currently in Turkey, as the Saudi Arabian regime has gone through great trouble to shield those involved from punishment by the Turkish authorities. This Friday, October 2nd marks the 2-year anniversary of Khashoggi’s brutal murder, and this week’s indictments are the latest example of Turkish prosecutors seeking to hold his killers accountable and bring them to justice, after 20 Saudi nationals were indicted on similar charges back in March. 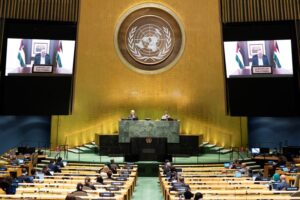 Abbas made the comments during a virtual address to the U.N. General Assembly. (Photo from Reuters)

In a recent virtual address to the U.N. General Assembly, Palestinian President Mahmoud Abbas urged the global community to convene an international conference early next year in order to work towards a genuine peace process between Israelis and Palestinians. Abbas emphasized that Palestinians remain committed to the Arab Peace Initiative, which calls for Arab nations to normalize their relations with Israel in conjunction with Palestinian statehood and Israeli withdrawal from occupied Palestinian territory. As such, impartial observers have denounced the Israeli normalization agreements signed by the United Arab Emirates and Bahrain in the preceding weeks for being completely devoid of any fair or just concessions to the Palestinians, elements that are necessary to achieve any meaningful progress in the Middle East peace process.