Welcome to our NIF Newsletter. In this week’s headlines: Supreme Court Justice Ginsburg’s passing sparks a controversial election year battle in the Senate over the future of the court, a Pew Research Center survey finds that the United States’ image internationally has plummeted due to its coronavirus response and other factors, Trump administration officials try to coax Sudan into normalizing ties with Israel during talks in the United Arab Emirates, and Turkey and Greece agree to resume discussions regarding their dispute in the Eastern Mediterranean.

SCOTUS Battle in the Senate 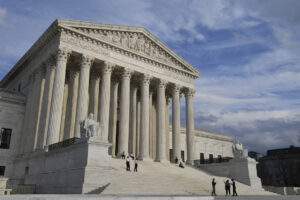 Ginsburg’s passing has drawn focus on the future of the court, with President Trump vowing to announce a nominee to fill the vacancy on Saturday. (Photo from AP)

The passing of Supreme Court Justice Ruth Bader Ginsburg late last week has ignited a controversial election year battle in the Senate regarding the future of the nation’s highest court. In the immediate aftermath of the news, Senate Majority Leader Mitch McConnell signaled his intent to fill Justice Ginsburg’s seat with President Trump’s nominee prior to the upcoming November election and Trump vowed to announce his choice to fill the vacancy on Saturday. Republicans hold a 53-47 majority in the Senate, and appear to have enough votes to potentially move forward with the confirmation process of Trump’s pick, as only two Senate Republicans have taken a principled stance against the move by citing the proximity of the presidential election which is only five weeks away. Back in February of 2016, following the death of Supreme Court Justice Antonin Scalia, McConnell and Senate Republicans refused to move on then-President Obama’s nomination of Merrick Garland to fill the seat by contending that it was too close to act given that the presidential election was nine months away. Thus, Democrats have been quick to criticize most of their Republican colleagues for their stance reversal this time, especially considering that in the current situation, the election is even much closer than it was when Scalia passed away in early 2016. 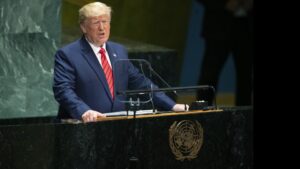 New data from the Pew Research Center indicates that global favorability of the United States is at an all-time low. (Photo from AP)

A new survey released by the Pew Research Center indicates that the image of the United States has fallen dramatically across the globe in recent years. In data collected across thirteen countries, America’s favorability rating and confidence in the American leader are at an all-time low. In particular, four years of Trump administration policies and the country’s handling of the COVID-19 pandemic have contributed to the United States’ image declining. According to the Pew Research survey, six of America’s allies have record low favorability ratings for the United States. Pew Research’s data from these countries, the United Kingdom, France, Germany, Japan, Canada, and Australia, indicates that the United States’ favorability in their eyes has been declining since 2016, with a sharp plummet recently due to the COVID-19 pandemic. Additionally, when the survey is expanded to include additional questions, confidence in President Trump is at an all-time low for American presidents. 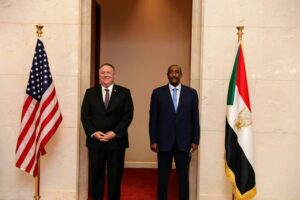 Trump administration officials made attempts to coerce Sudan into normalizing relations with Israel during talks in Abu Dhabi. (Photo from AFP)

This week, U.S. officials attempted to coerce Sudan into normalizing relations with Israel to follow the precedent set in recent weeks by Bahrain and the United Arab Emirates. The Trump administration has made mediating Arab normalization agreements with Israel its top foreign policy priority ahead of the November election, and President Trump has been criticized for politicizing the Middle East peace process during an election year. Representatives from Sudan’s transitional government met with Secretary of State Mike Pompeo and members of the Emirati government this week in Abu Dhabi, where the Sudanese leaders were encouraged to normalize relations with Israel. In exchange, Secretary Pompeo hinted at removing Sudan from the United States’ blacklist of countries who are state sponsors of terrorism, and the UAE offered up to $3 billion in immediate financial aid to Sudan. Despite these enticements, no deal was reached for Sudan to normalize relations with Israel. 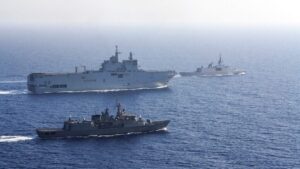 The two nations have been locked in a tense dispute over access to natural resources. (Photo from AP)

In one of the latest developments with the ongoing tensions in the Eastern Mediterranean, Turkey and Greece have agreed to restart talks regarding their dispute over access to natural resources in the region. While the countries have a history of discord on a variety of issues, this most recent flare-up emerged during the summer when a research vessel was dispatched to disputed waters. Many of the present-day issues are rooted in contested claims to territorial waters and conflicting interpretations of maritime boundaries, which have escalated further over the past decade due to a rise in oil and gas exploration and extraction. Observers hope that negotiations between the two sides can help bring about a diplomatic solution to the problem, or at the very least, prevent the conflict from spiraling out of control.