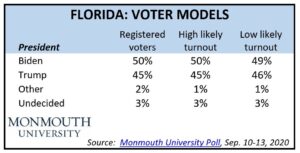 New presidential polling from battleground states across the country show Democratic nominee and former Vice President Biden with a slight advantage over President Trump, including a narrow lead in the critical swing state of Florida. There, a new poll shows Biden in the ascendancy, but with Trump not far behind. In the poll by Monmouth University, Biden leads the president by three-five points, depending on the audience. However, this is well within the margin of error, and is a marked improvement for President Trump, who trailed in Florida by as much as six during August. In addition to Florida, Biden maintains a slender lead in Nevada and Arizona as we approach the final month and a half before the election. Back in 2016, President Trump won swing states such as Florida, Arizona, and Wisconsin, which helped propel him to victory over Hillary Clinton. This year, Joe Biden has placed a heavy emphasis on winning back states that are vital to securing victory in the electoral college. 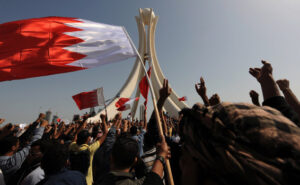 The Bahraini regime’s decision was criticized by human rights activists and civil society groups within the country. (Photo from AFP)

In the aftermath of Bahrain’s announcement that it would be normalizing relations with Israel, the regime’s decision was condemned by human rights activists and civil society groups within the country. Citizens took to social media to denounce the move, with the top hashtag trending on Twitter accounts there quickly becoming “Bahrainis against normalization.” Like the criticism towards the previously announced UAE-Israel normalization agreement, opposition from activists in Bahrain stems from the absence of fair concessions towards the Palestinians in conjunction with any potential deal, as laid out in the longstanding regional policy behind the Arab Peace Initiative. The response from many Bahrainis to the normalization announcement demonstrates that despite the recent actions of some repressive regimes in the Middle East, commitment to a just resolution to the Israeli-Palestinian conflict remains a popular sentiment among the general populations in the region. 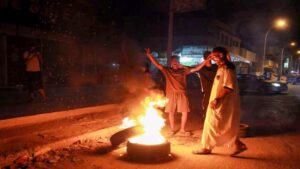 Citizens in eastern Libya have been protesting against poor public services and living conditions. (Photo from Getty Images)

Libya’s eastern-based government has resigned after days of civilian protests over deteriorating living conditions. The Tobruk-based government, aligned with renegade military commander Khalifa Haftar, submitted their resignations late on Sunday evening. Over the past few days, thousands of Libyans have taken to the streets in eastern cities under Haftar’s control to protest against poor living conditions. In Benghazi, al-Marj, and other cities across eastern Libya, shortages of electricity and water, among other basic necessities brought people into the streets to voice their displeasure with the government. In turn, military forces loyal to Haftar violently suppressed the demonstrations, killing one and injuring several others. Libya’s eastern-based government is not internationally recognized, and has been engaged in a bloody conflict against the Tripoli-based Government of National Accord, which is viewed as Libya’s legitimate ruling body. 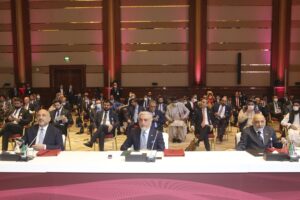 The opening session of the peace talks took place this past Saturday in Doha, Qatar. (Photo from AP)

This past week, intra-Afghan peace talks between officials from both the government and the Taliban commenced in Doha, Qatar. The negotiations, which are the first direct talks with representatives from the two entities and are a condition under the U.S.-Taliban deal brokered earlier this year, were supposed to begin in March but were delayed due to the Taliban’s continued attacks on Afghan forces and disagreement regarding the exchanging of prisoners. Since the U.S.-Taliban deal, violence levels in Afghanistan have risen, leading to concerns regarding the prospects for peace between the Afghan government and the Taliban. During the first half of 2020 alone, nearly 1,300 Afghan civilians have been killed, according to the United Nations. Ultimately, it took nearly six months to get the two sides to the negotiating table, and experts point out that the most challenging part of getting them to reach an agreement still lies ahead.