Welcome to our NIF Newsletter. In this week’s headlines: analysis of the latest U.S. presidential polling as we reach the 2-month milestone before the election, the El Al flight between Israel and the United Arab Emirates is criticized for politicizing the Middle East peace process ahead of the upcoming U.S. presidential election, tensions escalate in the Eastern Mediterranean as the European Union calls for dialogue with Turkey, and continued protests in Wisconsin and Oregon emerge as a major political talking point.

In addition to our ongoing newsletter, starting next week please also look out for our ‘Election 2020 Weekly Roundup’ which will be published on Mondays and examines the latest developments in some of the key races across the country as we approach November.

Presidential Polling at the 2-Month Milestone 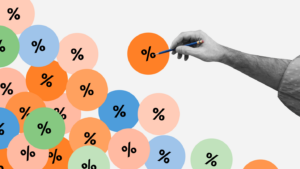 The latest analysis of presidential polling with two months to go before the election. (Photo from FiveThirtyEight)

Presidential Polling Analysis at the 2-Month Milestone Before the Election

With the 2020 U.S. presidential election just two months away, the latest polling indicates a rapidly evolving race between incumbent President Trump and former Vice President Biden. A majority of polls show Biden in the lead, although the president has continued to slowly claw back into the race. Biden also leads President Trump in approval rating across a majority of accredited polls, although the latter continues to have overwhelmingly positive approval among Republicans, indicating a united party behind the president. Former Vice President Biden also holds a slight advantage in many vital swing states, including some that President Trump won in 2016. Traditionally, the first polls after party conventions give a strong indication of where the presidential race will lead. Challengers tend to not have a large deviation from their previous numbers, whereas the incumbent can use a strong convention to catapult themselves into a better position. President Trump’s failure to elicit a significant jump in support after the convention will worry him, as he would have to be the first incumbent in 70 years to win re-election after trailing following the party conventions. 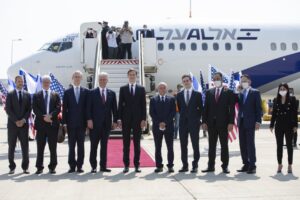 Among the flight passengers was Jared Kushner, President Trump’s son-in-law and adviser. (Photo from AP)

El Al Flight is Criticized for Politicizing the Middle East Peace Process Ahead of the Upcoming U.S. Presidential Election

Earlier this week, an El Al flight travelled from Israel to the United Arab Emirates as the Trump administration seeks to cement and tout the normalization of relations between the two countries as a foreign policy win in the lead up to the upcoming U.S. presidential election in November. The recently announced agreement disregards the longstanding regional position that calls for normalized relations with Israel which coincide with its withdrawal from illegally-occupied Palestinian territory and the establishment of an independent Palestinian state, and thus critics have denounced it and the subsequent moves to formalize it as a blatant attempt to politicize the Middle East peace process during an election year. In fact, Morocco refused to normalize their relations with Israel for these very reasons, lack of fair concessions to the Palestinians and timing, as the country has a history of avoiding partisan gestures during U.S. election cycles. Furthermore, in meetings with Trump administration officials this week, leaders from both Saudi Arabia and Bahrain also expressed that they would not normalize relations with Israel until the establishment of an independent Palestinian state. Due to the politicization of the El Al flight, it has also been condemned for being a cynical use of American taxpayer money.

Escalating Tensions in the Eastern Mediterranean 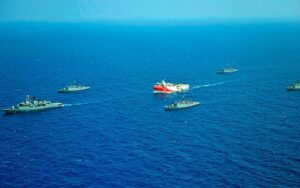 Tensions in the Eastern Mediterranean continue to rise over natural resource exploration. (Photo from PA)

Tensions in the Eastern Mediterranean have reached a boiling point in recent days, as Greece and the European Union remain locked in a dispute with Turkey over the Mediterranean’s vast energy resources. In recent weeks, Turkish seismic vessels have begun exploration missions searching for energy reserves in disputed Mediterranean territory also claimed by Greece. Greece believes that the scattered Greek islands around the Mediterranean expand its exclusive economic zone, but this is disputed by Turkey which argues Greece’s interpretation is in violation of international law and encroaches upon the exclusive economic zone off the Turkish coast. Further increasing tensions has been Greece’s decision to deploy troops to Kastellorizo, a Greek island that has been demilitarized since 1947 under an agreement that handed the island to Greece from Italy via Turkey. Additionally, there has been a Greek military build-up on 16 of the 23 Greek islands in the Mediterranean, all of which are supposed to be demilitarized under the 1947 Paris Peace Treaty. Greece has received the support of NATO and the European Union, but Turkish President Recep Tayyip Erdogan pledged not to yield, and to defend Turkey’s interests and sovereignty in the Mediterranean.

Ongoing Protests in Wisconsin and Oregon 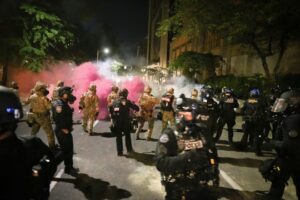 Protests against police brutality in Wisconsin and Oregon have intensified this week. (Photo from AP)

Protests in Wisconsin and Oregon have intensified this week, with some demonstrations devolving into violence. Protesters continue to demand accountability and action from local officials to tackle racial inequality and police brutality, following a spate of police shootings of African-Americans. The protests in Portland, Oregon have carried on for nearly 100 straight days, and local officials are calling for a cessation of demonstrations over a recent increase in violence. Across Portland, infrastructure has been damaged, dozens of people have been hurt, and one person was killed as the authorities struggle to handle the growing demonstrations. In Kenosha, Wisconsin, a protest movement emerged following the police shooting of Jacob Blake, an unarmed African-American. The protests against police brutality began peacefully, but have descended into chaos similar to Portland. Businesses have been destroyed and stores have been looted by agitators within the protests, which led to the Wisconsin National Guard being deployed to the city. The protests have also emerged as a major political talking point ahead of the presidential election, with President Trump and former Vice President Biden offering contrasting approaches to deal with the unrest.