Welcome back! We hope that you had a wonderful Independence Day weekend, and are excited to share with you our usual updates on what is going on in the world, and which trends to pay close attention to. While this week did not show a direct ramping up of U.S.-Iranian tensions quite of the level seen earlier this summer, it was by no means an uneventful week.

General Haftar, who is attempting to depose Libya’s current government, ordered a strike on a migrant 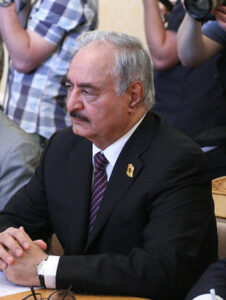 General Haftar in a 2017 meeting with the Russian Foreign Ministry

detention center in Tripoly on July 3rd. The assault has killed at least 44 people and injured about thrice that amount. The civilians killed are largely refugees and economic migrants from across Africa. President Trump and John Bolton both spoke with General Haftar on the phone in June, seemingly giving him the green light for the attack. The army of General Haftar is backed by the Saudi, Emirati, and Egyptian governments, with which the Trump administration has pursued a close alliance– however, it is unusual to say the least to see a U.S. administration take a side in a civil war with an internationally-recognized government. Trump reportedly decided to support Haftar upon urging from Egypt’s Abdel Fattah el-Sisi and Abu Dhabi’s Prince Muhammad bin Zayed in April. The attack on migrants caused international outcry from multiple bodies and the British representatives at the UN Security Council circulated a statement condemning the attack. However, the US delegation prevented the statement from being issued. The US State Department had issued an earlier criticism of the attack, so the change in attitude may suggest direct orders from the Administration. 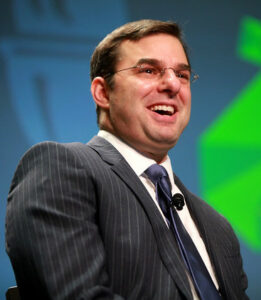 Representative Justin Amash of Michigan, a staunch conservative and consistent critic from the Right of President Trump, officially left the Republican Party on July 4th. This makes him the only independent in the House, the first since Bernie Sanders of Vermont. Rep. Amash had been elected as part of the Tea Party wave of fiscal conservatives, and famously writes an explanation of every vote that he makes. He is known for holding the line on budget, military, and civil liberties issues regardless of who is in power or which party proposed legislation. This has both gained him criticism for being a bad party member (often from former fiscal conservatives) and praise from constituents who appreciate his independent streak. As a Palestinian- and Syrian-American, Amash often faced racially-tinged attacks, such as a false accusation by California’s Devin Nunes (now famous for financial misconduct)  that he supported al-Qaeda. He is popular among his constituents but how he will fare in next year’s election, given the tendency of voters to vote for a party down-the-line, remains to be seen. 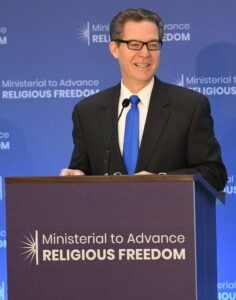 U.S. foreign policy must be grounded in human rights, and to this end he announced a new advisory panel called the “Commission on Unalienable Rights”. On its face this is a bit shocking, considering that Pompeo himself is an advocate of hawkish policy and has a history of defending the use of torture. However, the composition of the panel, chaired by Mary Ann Glendon, a genuine human rights advocate, suggests that this might be Pompeo’s in name only.  This is is buttressed by the fact that, despite Pompeo’s history of anti-Muslim

alliance with Frank Gaffney, the commission itself contains Muslim voices, such as Shaykh Hamza Yusuf who is the long-time subject of attacks from figures like Daniel Pipes. While the Trump administration has pursued close relationships with human rights-violating regimes like that of Saudi Arabia, the administration’s Office for Religious Freedom has taken a different line. Under the leadership of Ambassador Brownback, the office has advocated strongly for oppressed groups like the Rohingya Muslims of Burma and the Uyghur of China, as well as Jehovah’s Witnesses in Russia. It may be that this commission is the brainchild of these voices in the administration, given that Pompeo has appeared at events for the Office in the past. How the initiative plays out remains to be seen.