Welcome to our NIF Newsletter. In this week’s headlines: the funeral service for George Floyd is held in his hometown of Houston, Congressional Democrats unveil a police reform bill, a new study finds that shutdown orders prevented nearly 5 million additional coronavirus cases in the United States, and Russia breaks the ceasefire and resumes air strikes in Idlib. 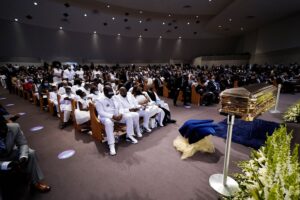 George Floyd was buried on Tuesday in his hometown of Houston. (Photo from USA Today Network)

The funeral service for George Floyd, who was killed in Minneapolis while under police custody on May 25th, was held on Tuesday in his hometown of Houston. Floyd’s death at the hands of four police officers was caught on video and has sparked worldwide protests against police brutality and racial injustice. The service honored other families in attendance who also had relatives killed during interactions with the police, including those of Eric Garner, Michael Brown, and Pamela Turner. Joe Biden, the former U.S. vice president and 2020 Democratic presidential nominee, offered a pre-taped message which was shown at the ceremony. Some of the political figures who spoke included Houston Mayor Sylvester Turner, Congressman Al Green, and Congresswoman Sheila Jackson Lee. The day after the service on Wednesday, George Floyd’s brother, Philonise Floyd, testified on Capitol Hill before the House Judiciary Committee regarding the need for police reform. 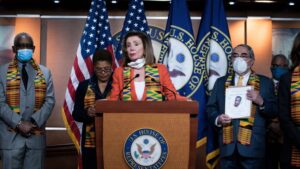 At a press conference earlier this week, Congressional Democrats discussed the proposed bill. (Photo from AFP)

Earlier this week, Democrats from both the House and Senate announced newly-proposed police reform legislation in the aftermath of the George Floyd murder. The bill, titled the ‘Justice in Policing Act,’ seeks to implement a variety of reforms including a prohibition on the use of chokeholds, the creation of a national registry to track police misconduct, a ban on no-knock warrants in drug-related cases, and lower legal standards to pursue penalties against police malpractice. The measure, which the House is expected to take up later this month, is being put forward at a time when widespread protests against police brutality and racial injustice continue to take place across the country. Speaker Nancy Pelosi expressed confidence that the bill would pass in the House, and said that she hopes Senate Majority Leader Mitch McConnell then “swiftly” takes it up in the upper chamber of Congress. 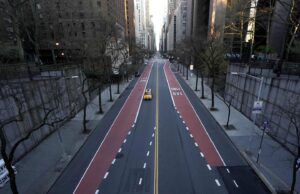 New research has shown that lockdown orders were wildly successful in combating the spread of COVID-19. (Photo from Getty Images)

New research from the University of California-Berkeley has shown that shutdown orders to close nonessential businesses and keep people at home helped the U.S. avoid at least five million cases of the novel coronavirus. The research examined over 1,700 public policy interventions from governments in the U.S., South Korea, Italy, Iran, France, and China to analyze how effective these policies were in combatting the spread of the virus. In total, researchers discovered that these countries were able to avoid 62 million confirmed cases of COVID-19 combined by implementing lockdown orders. Additionally, because many cases of the virus are not formally diagnosed, the researchers hypothesize that lockdown orders could have prevented up to 530 million cases worldwide, with 60 million in the United States alone. 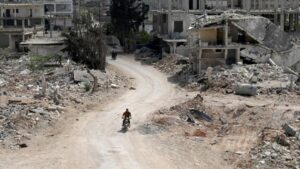 Russia Breaks the Ceasefire and Resumes Air Strikes in Idlib

The Russian military launched air strikes in Syria’s Idlib province this week, breaking a three-month ceasefire in Syria’s last rebel-held enclave. Turkey and Russia had brokered a ceasefire in early March of this year that temporarily stopped the fighting in Idlib, but the Russian strikes this week broke the truce. Rescuers reported that two civilians were killed and a further three were injured when the rockets struck villages in Idlib’s south. Pro-opposition activists in the area said that twelve villages were targeted by the attack, and civilians were fleeing in anticipation of additional air strikes. The White Helmets, a volunteer search-and-rescue organization on the ground in Syria, said the villages targeted were al-Maouzrah and Jabal al-Zawiya in southern Idlib.