Welcome back to the NIF Newsletter! This week saw the mounting U.S.-Iranian tensions reach their peak, with the eve of a military strike, only for a last-minute change. Tensions between the two, as well as the broader Gulf State vs Iranian tensions, have heightened the existing foreign policy discussion in Congress as well as among figures in the media, because the more abstract discussions have now come to seem more tangible. These include the constitutionality of unilateral executive action in warfare and arms sales, the validity of old military authorizations, and how the United States should proceed with diplomacy in the region. Find out more below.

Following the downing of an American unmanned drone by an Iranian missile, President Trump approved a retaliatory strike based on the urging of Secretary of State Mike Pompeo, CIA Director Gina Haspel, and National Security Advisor John Bolton. However, late Thursday evening, the president withdrew his approval, perhaps following the guidance of senior Pentagon officials who urged against taking such action. They see such retaliation as a source of instability, and argued that it would risk American forces involved in conflicts throughout the region. Indeed, earlier in the day, the president had suggested that the drone might have been shot down by a “loose and stupid” Iranian official as a mistake, adding “I find it hard to believe it was intentional.” He insisted, however, that the United States will not stand for such behavior, which sounded to many like a threat of military action. It is worth noting that Congress has not authorized a war on Iran, so any such war would be unconstitutional.

It seems that there is a gulf within the pool of officials, with the military itself cautious of intervention and the civilian appointees very eager to go to war. Indeed, as soon as the president suggested that the attack was a mistake, he faced backlash from hawkish quarters within hours. Though the president ultimately sided with top Pentagon staff tonight, pulling back from an attack, he did so after initially accepting the advice of the hawkish advisors. This means that the president’s future behavior in this conflict is still mostly unpredictable, however perhaps his final decision, his emphasis on the Iranian attack being mistaken, and his history of appointing generals to senior posts suggests that President Trump places some weight on their opinions. The immediate future of this tension is unclear, as the rapid change in decision on Thursday night makes evident. The gulf among advisors, too, might deepen as the stakes of one choice versus the other get higher.

Kushner Plan for Israel-Palestine Set to Be Revealed

In a Monday interview with i24NEWS, Jason Greenblatt gave some details about the administration’s tentative plan towards an Israeli-Palestinian peace agreement. Greenblatt, the president’s special representative, has formulated the plan with Jared Kushner, the president’s son-in-law. The Bahrain conference at which the plan will be announced next week will feature no Israeli or Palestinian government officials. The Palestinian Authority is boycotting the plan, so the administration decided against inviting Israeli officials either, or those from other countries. Instead, the focus is said to be on economic matters, with businesses from across the region represented to discuss investment in Palestine. However, besides this, little is known, and the more explicitly political part of the plan is planned for a November announcement, so that it follows the Israeli elections in September. That said, the Times of Israel reported on Tuesday that the former head of Israel’s Coordinator of Government Activities in the Territories, Yoav Mordechai, will be attending the Bahrain conference, which seemed to be indirectly 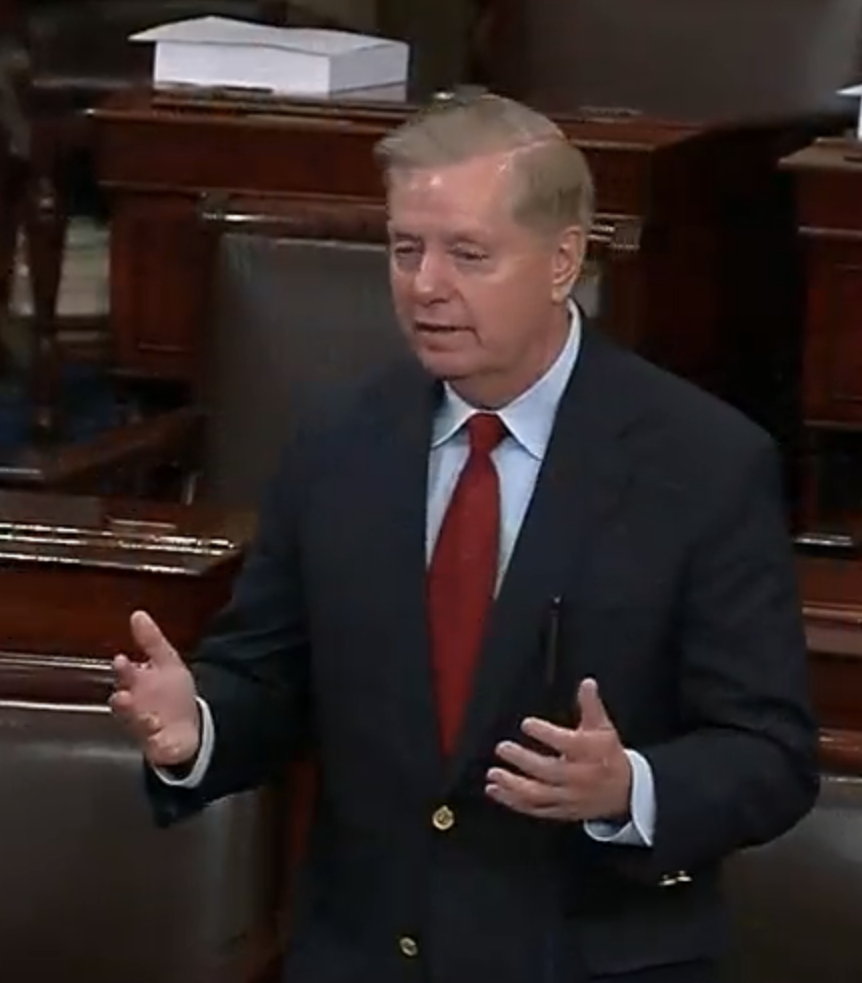 Senator Lindsey Graham of South Carolina cites the murder of Jamal Khashoggi to argue the KSA should not get a pass.

confirmed in Prime Minister Netanyahu’s speech the same day. As such, it is unclear so far what to make of statements describing the content of the upcoming conference. It is possible that these contradictory statements from officials from the United States and Israel are aimed at gaining leverage in negotiations.

The Trump administration has attempted to make 22 arms sales, primarily to the Saudi-UAE coalition, without congressional approval, claiming that the sales are prompted by an “emergency”. However, even many hawkish legislators were skeptical of this step. Two Thursday Senate resolutions moved to block the attempted sales, with the first succeeding 53-45 and the second succeeding 51-45. Rand Paul, Lindsey Graham, Susan Collins, Jerry Moran, Lisa Murkowski, Todd Young, and Mike Lee joined Democrats in the vote, citing constitutional grounds and Congress’s legislative supremacy. Most Republicans followed

Mitch McConnell’s push for voting against the resolution, however the constitutionalist bloc made the difference in the votes. Whether or not President Trump vetoes this remains to be seen, but it will still not settle the constitutional question of whether the president can even legally conduct such a sale without the approval of Congress. 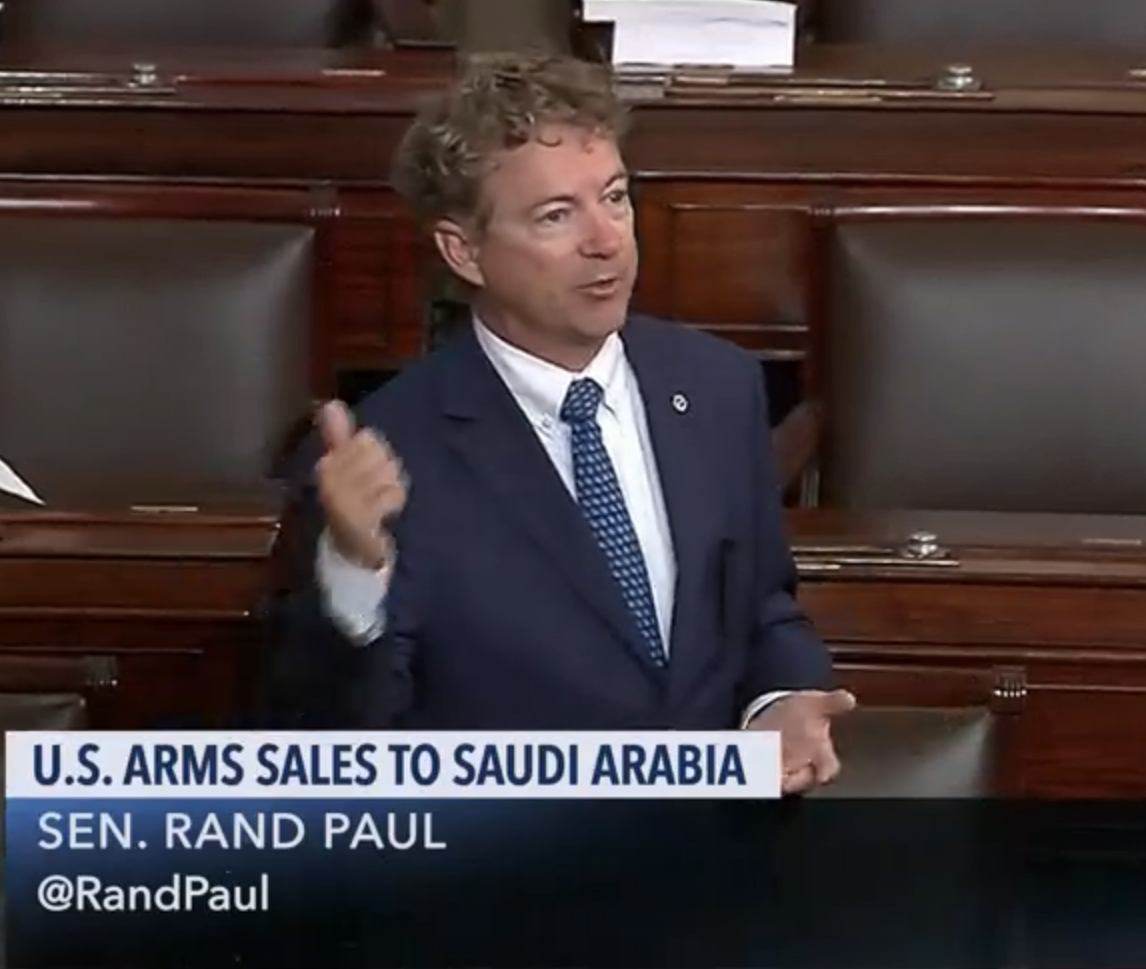 The National Defense Authorization Act, or NDAA, passes annually, which means that it attracts attention from throughout congress, from legislators hoping to attempt amendments. Senator Rand Paul of Kentucky is challenging the process on procedural grounds, demanding open debate on amendments, rather than a fast-tracked vote. Paul’s own amendments include a ban on indefinite detention, withdrawal from the Afghanistan war within a year, and a repeal of the 2001 Authorization for Military Force (AUMF). These amendments reflect longtime concerns from civil libertarians and foreign policy experts, but this has not stopped sharp opposition to Paul for simply raising the procedural issue. So far this has prevented the bill from being brought up on Thursday as leadership had planned. Instead, this will happen on Monday. Paul’s perpetual insistence on the 2001 AUMF is perhaps even more relevant this year, given that figures in the Trump orbit, including Secretary of State Mike Pompeo, want to use the Afghanistan authorization to go to war with Iran. While this does not really hold up to even a loose reading of the AUMF, if the AUMF were repealed, it would leave no congressional backing to cite, however spuriously. Paul’s insistence on debate may result in these issues getting a public discussion in the Senate.

We are delighted to host several summer interns this year, who are conducting thorough research of a variety of policy areas. They come from across the country, and bring personal experience and their studies to the table, which has made for an excellent mix of perspectives. This year’s intern class includes Mira Mercier, Aaron Dai, Nick Jaramillo, Maddie Seibert, and Benjamin Dunn. Expect to see their content, both long- and short-form on the website in the coming weeks. Bringing on and training talent through student programs is an essential part of our mission to improve the policy conversation.