Welcome to our latest edition of the NIF Newsletter. In this week’s domestic and foreign affairs headlines: the Trump administration seeks a $1 trillion stimulus package to confront the coronavirus crisis and its impact on the U.S. and world economy, voters in three more states cast their ballots in the presidential primaries while Ohio and others postpone their elections, Israeli President Rivlin gives Blue and White Party leader Gantz the mandate to form a coalition government, the U.S. Army prepares to pull out of three military bases in Iraq, and Saudi Arabia’s Crown Prince bin Salman launches a crackdown against hundreds of government officials in an attempt to purge political rivals and consolidate power.

Impact of the Coronavirus 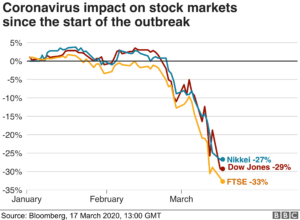 The Trump Administration has proposed a massive stimulus package to jumpstart the economy as the coronavirus continues to spread. (Photo from Bloomberg/BBC)

Stimulus Package Proposed to Confront the Coronavirus’ Impact on the Economy

President Trump and Treasury Secretary Steven Mnuchin have announced plans for a $1 trillion stimulus package to revitalize the economy as the coronavirus continues to spread. Included in the package are plans to allocate $250 billion for checks to be sent directly to Americans. Steven Mnuchin met with Republican Senators on Monday to provide a timeframe for the plan, and said he was aiming to send the stipend checks by the end of April, and that they would cover two weeks of pay. During the same meeting, Secretary Mnuchin stressed the importance of immediate action, saying the unemployment rate could rise to 20% without significant government intervention. President Trump has also instructed Mnuchin to allow the deferment of income tax payments for 90 days with no penalty to further ease the economic burden on Americans. The spread of the coronavirus has steadily dismantled both the United States and the world economy, as countries are forced to enter lockdown to prevent the spread of the disease. 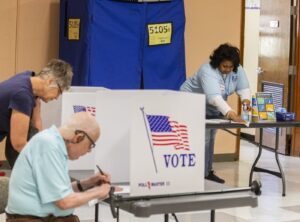 The presidential primaries in the three states of Florida, Illinois, and Arizona went forward as planned this week. (Photo from Getty Images)

The three states of Florida, Illinois, and Arizona held their presidential primaries this week as originally planned despite the growing coronavirus crisis, while Ohio postponed its election until June. Ohio was the only state that was slated to hold its primary on Tuesday that did not end up doing so, however the four states of Georgia, Kentucky, Louisiana, and Maryland have also recently announced plans to postpone their contests as well. Former Vice President Joe Biden won all three states that held their elections this week, and has further increased his pledged delegate lead over Senator Bernie Sanders. Biden is now ahead by approximately 300 pledged delegates, and has strengthened his status as the clear frontrunner to win the race for the Democratic presidential nomination.

Gantz Given Mandate to Form Government 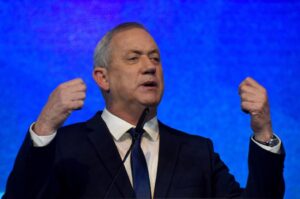 Gantz was tasked with forming a coalition government after he received a narrow majority of recommendations from Knesset lawmakers. (Photo from UPI)

Following consultations with Knesset lawmakers, Israeli President Reuven Rivlin has granted Blue and White Party leader Benny Gantz with the mandate to form a new coalition government. Gantz was chosen after receiving the support of parties representing 61 seats, a slim majority of the 120-seat Knesset, and will now have 28 days to form a coalition government. Rivlin’s decision to task Gantz with the first opportunity to do so comes two weeks after Israel’s third general election in less than a year, which like the previous ones, failed to produce a clear winner. It also comes as a political blow to incumbent Israeli Prime Minister Benjamin Netanyahu, who was passed up in favor of Gantz after his 58-seat bloc fell three seats shy of the necessary majority. Netanyahu also faces an impending corruption trial on multiple criminal charges which has been postponed until May due to the ongoing coronavirus crisis. 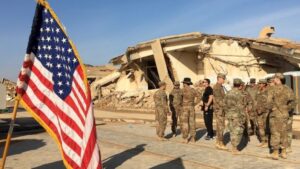 American forces are withdrawing from three bases in Iraq. (Photo from BBC)

U.S. Army Prepares to Pull Out of Three Military Bases in Iraq

The United States Army announced plans to withdraw from three bases in Iraq amid mounting tensions with Iraq and Iran. The U.S. will officially hand over control of the bases to the Iraqi Army later this month, which will end the American presence along the Iraq-Syria border. One of the bases, al-Qaim, has been a base for American forces on the frontlines of the fight against Al Qaeda and ISIS. Forces serving out of al-Qaim were in close proximity to Iranian-backed militias in Iraq, and the two sides had a fragile agreement to work together to oust ISIS from the border region. However, after the American strike against Iranian General Qassem Soleimani, the base faced an increased risk from the Iranian-backed militias, which made its presence untenable. The withdrawal from the bases is part of the larger American strategy to reduce its military footprint in Iraq and throughout the region.

Earlier this week, Saudi Arabia arrested nearly 300 government officials in another sweeping crackdown on corruption under Crown Prince Mohammed bin Salman. In 2017, bin Salman arrested over 300 princes and private sector moguls under the guise of cracking down on corruption. However, the international community largely saw this as bin Salman consolidating power over his rivals instead of targeting corruption. Most of the individuals detained in 2017 were eventually released after transferring assets and money to the Saudi government. The current wave of arrests come as rumors swirl over the health of Saudi King Salman and other members of Saudi Arabia’s royal family express concerns over Mohammed bin Salman’s ability to lead the country.