Welcome to the latest edition of the NIF Newsletter. This week, we recap yesterday’s NIF lunch discussion event regarding the recently proposed Trump Mideast Peace Plan.

The National Interest Foundation (NIF) hosted an event on February 12th that provided perspective on the Middle East Peace Plan that was recently released by the Trump administration. The distinguished panel of experts consisted of: Dr. Shibley Telhami, the Anwar Sadat Professor for Peace and Development at the University of Maryland; Khaled Elgindy, Senior Fellow and Director of Israeli-Palestinian Affairs at the Middle East Institute; Said Arikat, Washington Bureau Chief at Al Quds Daily; and Kelley Beaucar Vlahos, Executive Editor at the American Conservative, who served as moderator. The panelists spoke on the conflicting interests of the Trump White House in negotiating the deal, and the flaws with the proposal itself.

The event began with opening remarks by the President of NIF, Khaled Saffuri, who introduced each speaker. In turn, each panelist then gave their thoughts on the Trump Mideast Peace Plan, beginning with Dr. Telhami, followed by Said Arikat, and concluding with Khaled Elgindy. Dr. Telhami spoke about the disintegration of years of bipartisan American foreign policy that advocated for a two-state solution. He condemned the Trump proposal as being overtly one-sided, and undoing years of multilateral negotiations aimed at securing a two-state solution. Said Arikat voiced his concern over the plan formalizing Israeli settlements in the Jordan Valley and argued that the issue of Palestinian sovereignty over its territory should be non-negotiable. Finally, Khaled Elgindy spoke about the Trump proposal ignoring both history and international law. He said that the peace deal posed an “existential threat” to a two-state solution and trampled on existing norms and historical precedent. All three panelists agreed that the deal was extremely biased in favor of Israel and unlikely to be a lasting solution in the region. 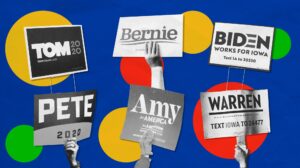 The Democratic candidates vying for the party’s presidential nomination faced off this week in New Hampshire. (Photo from NBC News) 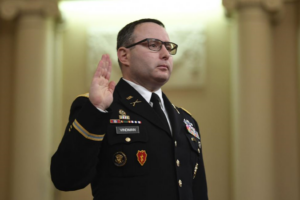 Two key witnesses in the impeachment proceedings were fired by President Trump. (Photo from UPI)

President Trump fired two key witnesses who testified against him in the impeachment proceedings; Lt. Colonel Alexander Vindman and Ambassador Gordon Sondland. Vindman was the top Ukraine expert on the National Security Council, and received a purple heart after being wounded while serving in the Iraq War. Gordon Sondland was serving as Ambassador to the European Union, and was a hotel magnate before being appointed to the ambassadorship. The removal of Vindman and Sondland comes amid a clear out of advisors who were seen as disloyal to the president. They join Ambassador Marie Yovanovitch, Ambassador William Taylor, and Jennifer Williams in leaving the executive branch in the fallout of the impeachment trial. 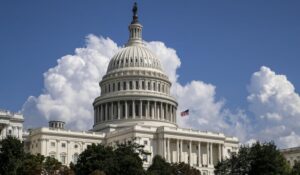 Over 100 Congressmembers sent a letter to President Trump expressing strong disapproval of his Mideast Peace Plan proposal. (Photo from AP)

Led by Representatives Alan Lowenthal (D-CA) and Andy Levin (D-MI), a total of 107 Congressmembers sent a letter to President Trump denouncing his recently-released Mideast Peace Plan proposal. The signatory lawmakers criticized the plan for paving the way towards permanent Israeli occupation of the West Bank and endorsing the annexation of illegally-constructed settlements. They also condemned the Trump administration for failing to consult with the Palestinians when devising the proposal, and for crafting an idea of Palestinian statehood that falls far short of a real and viable state. Additionally, the group of Congressmembers highlighted the suspicious timing of the plan’s release mere weeks before Israel’s upcoming election in March and in the midst of the formal criminal indictments against Israeli Prime Minister Netanyahu, both of which suggested ulterior motives. 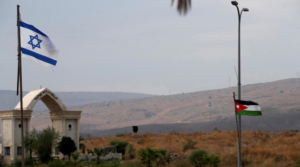 Israel has announced a new initiative to blockade Palestinian agricultural exports and prevent them from reaching Jordan in the aftermath of a proposed peace deal unveiled by the Trump administration. Trade between Palestine and Jordan is worth roughly $100 million per year, and includes items such as vegetables, fruits, olives, olive oil, and dates. Jordan also provides exports of Palestinian products to countries around the world, which Israel is attempting to stifle. The Israeli authorities have defended the new measure, saying it is retaliation for a Palestinian boycott of Israeli goods such as fruit juices, mineral water, and agricultural products.