As we approach the end of the first month of 2020, we welcome you to our latest edition of the NIF Newsletter. In this week’s headlines: President Trump releases a controversial and widely-criticized Middle East peace plan, former National Security Advisor Bolton’s forthcoming book claims that the president told him the aid to Ukraine was tied to investigations into his political rivals, the Supreme Court allows the Trump administration’s “public charge” immigration rule to take effect, and prominent rights activist Pashteen is arrested in Pakistan. 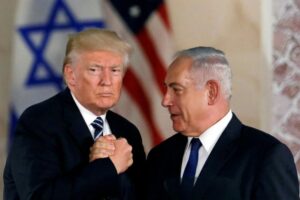 Trump unveiled his so-called ‘Deal of the Century’ after meeting with Israeli leaders this week. (Photo from Reuters)

This week, President Trump announced his so-called ‘Deal of the Century’ alongside embattled and recently officially-criminally indicted Israeli Prime Minister Benjamin Netanyahu to a wave of swift and widespread criticism. The controversial plan would allow for U.S. recognition of Israeli sovereignty over the Jordan Valley and all of the settlements Israel has illegally constructed in the occupied West Bank – the latter of which in particular has alienated much of the world and would mark a radical shift in a half-century-old American policy. The deal has also been condemned for ignoring many of the Palestinians’ core desires and key issues which have held up peace talks in the past, as the plan was drafted with no input from the Palestinian side altogether and was emphatically rejected by President Mahmoud Abbas. 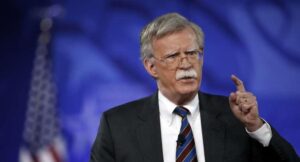 In a forthcoming book, Bolton alleges that President Trump tied Ukraine funds directly to desired investigations into his political rivals. (Photo from AP)

In one of the latest developments with the ongoing impeachment inquiry against President Trump, former National Security Advisor John Bolton claims in a forthcoming book that the president told him he wanted to withhold security aid from Ukraine until the nation helped him with politically-charged investigations into his rivals. The allegation contradicts Trump’s assertion that his actions with Ukraine were intended to root out corruption, not produce dirt on his opponents. Trump denied the allegations in a series of tweets, while his defense lawyer Alan Dershowitz argued that abuse of power was a “political weapon,” not an impeachable offense – even if the president in fact demanded a quid pro quo. Nevertheless, the new revelations have ramped up the push for witnesses, including Bolton, in the current Senate impeachment trial. Bolton recently stated that he would be willing to testify if subpoenaed. Following the conclusion of a 16-hour Q&A period on Wednesday and Thursday, the vote regarding witnesses in the Senate impeachment trial is expected to take place on Friday. 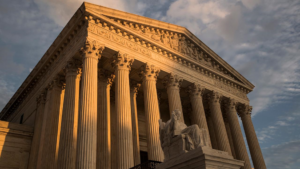 The Supreme Court narrowly approved a controversial change to immigration law, which was proposed by the Trump administration. (Photo from AP)

The Supreme Court ruled this week that a controversial Trump administration proposal regarding green cards was constitutional. The policy in question revises the existing “public charge” law, and makes immigrants ineligible for permanent legal status if they take advantage of public benefits such as food stamps or Medicaid. If an immigrant is deemed to be likely to use public benefits, they could be denied a green card, the document that allows permanent residency in the United States to non-citizens. The Supreme Court voted 5 to 4 to allow the new policy, with the court’s conservative judges siding with the Trump administration, and the liberals against it. Despite the Supreme Court ruling the new plan constitutional, the Trump administration will face additional injunctions from lower courts around the country in the coming days and weeks. 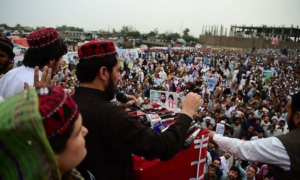 Prominent Pakistani activist Manzoor Pashteen was arrested earlier this week in Peshawar, in Pakistan’s northwest. Pashteen has been a vocal critic of Pakistan’s powerful military, and its enforced disappearances and extrajudicial killings. Pashteen is the leader of the Pashtun Tahaffuz Movement (PTM), which is an organization that defends human rights in Pakistan. The authorities announced he was arrested on five charges of conspiracy and sedition, which his colleagues say are nonsense and politically motivated. Pashteen’s arrest comes after he gave a speech that authorities deemed as being against the constitution and state. Manzoor Pashteen’s arrest is just the latest example of Pakistan cracking down on dissidents and those who challenge the country’s leadership.