Welcome to the latest NIF Newsletter. In this edition, we take a look at a recent Pew Research Center survey regarding global perceptions of U.S. President Donald Trump and views toward the United States as a whole, while also recapping the weekly news headlines.

Since the beginning of his Presidency, Donald Trump has received largely negative reviews from the general world public, with more negative ratings in comparison to other major world leaders. Trump receives the highest negative ratings among the five leaders tested for the survey, though ratings for Putin and Xi are also on balance negative. Of the countries surveyed, a median of 64% express a lack of confidence in Trump’s handling of world affairs. He especially gets poor reviews in Western Europe and Mexico, where 75% to 89% do not have confidence in Trump.

Conducted in the spring and summer of 2019, the survey conveys that the lack of confidence in President Trump seems to be driven by opposition to his policies, with disapprovals in the sixties range when assessing increased U.S. tariffs on imported goods, withdrawals from international climate agreements, Trump’s proposal to build a wall on the border with Mexico, tighter restrictions on immigration, and withdrawal from the Iran nuclear weapons agreement. Trump’s approach to North Korea is the only policy position tested that is viewed favorably on balance, with a median of 41% saying they approve, while 36% disapprove.

There are six nations however, where roughly half or more of those surveyed voiced confidence in his handling of world affairs, with more popularity among the political right in general. The greatest confidence in Trump is among European right-wing populist party supporters, but even with those who have favorable views of these parties, support for Trump’s policies is limited.

These are some of the major findings, but you can click here for the full article regarding the Pew Research Center survey.

In this week’s headlines: the House transmits the articles of impeachment against President Trump to the Senate, the final Democratic presidential debate before the Iowa Caucuses takes place in Des Moines, anti-government protesters take to the streets in Iran after the regime admits accidentally shooting down a Ukrainian Airlines flight, leaders from the rival factions of the Libyan Civil War meet in Moscow for negotiations, and the Sultan of Oman passes away after nearly 50 years of rule.

House Transmits Articles to the Senate 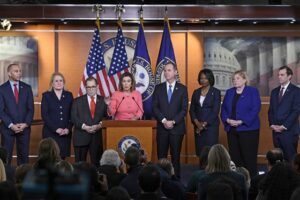 The House approved a resolution to name impeachment managers and transmit the articles of impeachment to the Senate. (Photo from AP)

House Transmits Articles of Impeachment to the Senate

On Wednesday of this week, the House voted 228-193 to approve a resolution to name impeachment managers and transmit the articles of impeachment against President Trump to the Senate. This is the final step necessary before the Senate impeachment trial can begin, and Senate Majority Leader Mitch McConnell stated that he expects it to get underway next week on January 21st. As a part of this House-approved resolution to send over the articles, seven impeachment managers have been appointed to present the lower chamber’s case in the upcoming Senate impeachment trial. The House voted to impeach President Trump on two separate charges – abuse of power and obstruction of Congress – back on December 18th and the matter now formally moves over to the Senate for them to convict or acquit him. 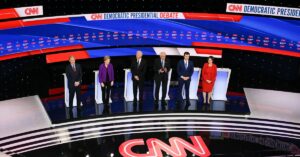 On Tuesday evening, Democrats vying for their party’s presidential nomination took to the debate stage for the final time before the Iowa Caucuses. (Photo from Getty Images)

The leading Democratic candidates for the 2020 presidential election took the debate stage in Des Moines, Iowa this week for the final time before the first votes of the election campaign are cast. The candidates on stage were: Vice President Joe Biden, Tom Steyer, Senator Bernie Sanders, Senator Elizabeth Warren, Mayor Pete Buttigieg, and Senator Amy Klobuchar. Tuesday’s debate had the fewest candidates on stage of any Democratic debate to date, with candidates both dropping out and failing to meet the requisite polling and fundraising targets to be included. Notable absentees were Senator Cory Booker of New Jersey who recently dropped out of the race; Andrew Yang who did not meet the requirement to poll at 5% in four separate polls; and Mayor Mike Bloomberg, who is not accepting political donations and therefore did not meet the requirement to receive contributions from 225,000 unique entities. 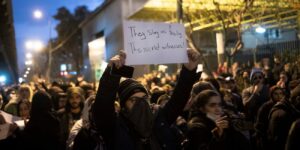 Mass protests have been held in Iran over the government’s shooting down of a Ukrainian Airlines passenger jet. (Photo from Getty Images)

Iran is currently gripped by anti-government protests, as outrage grows over the government’s handling of a Ukrainian Airlines flight that was shot down by the Iranian military. Iran’s government admitted that it shot down Ukrainian Airlines flight 752 when it was mistaken for an American military jet. Initially, Tehran blamed the crash on a mechanical failure, but when it became clear that a surface-to-air missile had intercepted the plane, Iran’s Revolutionary Guards took responsibility and said it was a mistake. As a result, Iranians have been demonstrating in the streets against the government, and calling for leadership to step down. University students in Tehran and Isfahan ignited the protests, and have since been joined by regular civilians. The protests have been permitted to an extent by the authorities, although reports and video footage emerged showing police using live ammunition and tear gas to disperse crowds. 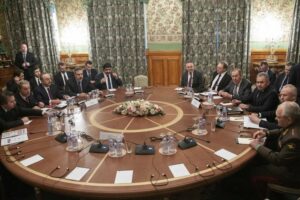 Libya’s warring parties met in Moscow this week to try and negotiate a peace settlement. (Photo from AP)

Leaders from Rival Libyan Factions Meet in Moscow for Negotiations

The leaders of Libya’s warring factions met in Moscow this week, amid negotiations aimed at ending the fighting. The Moscow talks are seeking a resolution to the war in Libya through an unconditional and open-ended ceasefire. Russia and Turkey were key in negotiating an initial ceasefire between the Government of National Accord (GNA), led by Prime Minister Fayez al-Sarraj, and the Libyan National Army, led by General Khalifa Haftar. Russia and Turkey are on opposite sides of the conflict, but are working closely to push the two Libyan sides to an agreement. The GNA is backed by the United Nations and views itself as the legitimate political body in the country, whereas General Haftar’s Libyan National Army has fashioned itself as an anti-terrorist federation and has received backing from the United Arab Emirates and Saudi Arabia. 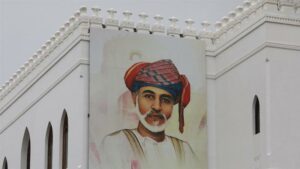 Sultan Qaboos of Oman, the Middle East’s longest-serving leader, passed away at the age of 79 after nearly half a century of peaceful rule. (Photo from Reuters)

The Middle East’s longest-serving leader, Sultan Qaboos of Oman, passed away after nearly half a century of peaceful rule. Qaboos’ cousin and the former Minister of Heritage and Culture, Haitham bin Tariq Al Said, was sworn in as Oman’s new sultan after relatives opened a secret letter detailing Qaboos’ choice of successor. Sultan Qaboos came to power in 1970 after deposing his ultra-conservative father, and reformed Oman from a country with harsh laws and a lack of infrastructure into one of the most stable forces in the region. Under his reign, Oman also transitioned from an isolated state into an active member of the Arab League and the United Nations, and has played a major role as arbiter and peacekeeper in Middle Eastern diplomatic affairs.