Welcome to our NIF Newsletter. We hope that everyone has a wonderful Thanksgiving. In this week’s headlines: the 2022 FIFA World Cup opens in Qatar amid a mix of controversy and excitement, the declaration that Saudi Crown Prince Mohammed bin Salman’s official standing should provide immunity from Khashoggi killing lawsuits draws criticism from human rights activists, and Turkey carries out air strikes on Kurdish militant bases in northern Syria and Iraq in retaliation for the recent Istanbul bomb attack while Iran also targets Kurdish positions in northern Iraq. 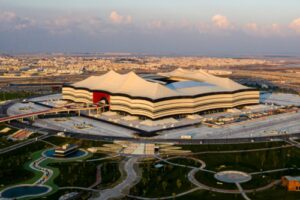 On Sunday, the long-anticipated 2022 FIFA World Cup officially opened in Qatar, mixed with sentiments of excitement for the Arab World but also amid some fair concern over human rights-related issues. The build-up to this year’s World Cup began in 2010 when it was announced that Qatar would make history by becoming the first Middle Eastern country to host the internationally-renowned event. Of course, there has been a great deal of enthusiasm, especially among Arabs, many of whom are hopeful that hosting the World Cup will give the Middle East a chance to showcase itself and garner more acclaim amongst the international community. Impartial analysts have attempted to emphasize the importance of providing a balanced perspective regarding the World Cup, giving attention to the legitimate criticisms of migrant worker conditions and other human rights-related problems but also ensuring to avoid double standards over negative backlash considering that the last World Cup (2018 in Russia) and Winter Olympics (2022 in China) were also held in countries with these types of concerns.

Preparation for the historically significant event has had a human rights shadow looming over it for twelve years, an element which seemed to deepen in the final weeks leading up to the start of the World Cup. An estimated 85% of Qatar’s population consists of foreign laborers, which various rights groups and states alike have claimed are often exploited. According to a 2021 report from The Guardian, 6,500 South Asian migrants died from 2014 to 2020. Many of the rest live in overcrowded and poorly-maintained labor camps. Equally concerning, efforts to reform the infamous kafala system, considered by some to be a modern form of indentured servitude, have mostly failed. Labor conditions aside, critics have also called out Qatar’s harsh treatment of the LGBTQ community. Qatar has, however, made notable improvements to their labor laws, and promised that LGBTQ attendees would be safe. They also now have one of the highest minimum wages in the Middle East, and there is evidence that suggests that The Guardian’s death count is too large, even though Qatar’s reported 37 deaths is at the same time, estimated to be far too low.

What has gone largely uncovered, though, is the hypocrisy and double standard-nature of the human rights allegations leveled at Qatar. Yes, there are certainly troubling human rights violations taking place, and observers should continue to use the World Cup stage to address them. On the other hand, however, international sporting events have been held in other countries with equally poor human rights records in recent years. The last World Cup was held in Russia. At the time, Russia was committing war crimes in Syria and was already in the process of illegally trying to annex Ukrainian territory. Now, of course, Russia has launched an invasion of Ukraine that has been raging for around 9 months. To the south of Russia, Beijing held the Summer Olympics in 2008 as well as the Winter Olympics in 2022. China is well known for its human rights violations, most notably against the Uyghur population. Reports indicate that China has detained as many as one million Uyghurs in recent years and sent them to “re-education camps” with shoot-to-kill policies for those who try to escape. Human Rights Watch and Amnesty International have accused China of crimes against humanity, and several nations including the United States have labeled the situation a genocide. China has also come under fire for years for their mistreatment of their Olympic athletes. The 2022 Human Freedom Index confirms that Qatar, Russia, and China are not so different – Qatar ranks 128th, Russia ranks 126th, and China ranks an abysmal 150th.

Human rights groups are hopeful that the spotlight of the World Cup will create lasting reforms in Qatar, and many have suggested that there have been recent ones that have been successful – albeit minimally. Others have put forward the notion that hosting a glamorous World Cup has simply been a means of deflecting from the more alarming aspects of society. Whatever the case may be, it is important to be fair and consistent in our assessments.

Critics of the declaration have argued that Mohammed bin Salman accepted the title of prime minister so that it would allow him to claim immunity from the pending lawsuit. (Photo from AP)

The Biden administration recently declared that Mohammed bin Salman (MBS), the crown prince of Saudi Arabia – who was also named prime minister back in late September – should be immune from lawsuits connected to the heinous 2018 murder of journalist Jamal Khashoggi. While the Biden administration states that the high office held by MBS dictates this, critics have argued that he only accepted the official title of prime minister in order to claim immunity from the pending Khashoggi killing lawsuit. The lawsuit, filed by Khashoggi’s fiancée Hatice Cengiz, makes many charges including wrongful death. Some have also pointed out the notable shift in tone from the Biden campaign trail where he actively and forcefully denounced the crown prince for his role in the brutal slaying, while the White House has tried to maintain that this declaration is merely a legal matter and that the president’s feelings about MBS have not changed. Regardless, Biden has elicited criticism for a visit that he made to Saudi Arabia back in July, where he even exchanged a very public fist-bump with the crown prince.

According to the Biden administration’s defense of the declaration, the crown prince’s official standing should warrant that he be given immunity regarding the lawsuits. In its letter, the State Department had tried to quell anticipated backlash from rights activists over the declaration by saying that “In making this immunity determination, the Department of State takes no view on the merits of the present suit and reiterates its unequivocal condemnation of the heinous murder of Jamal Khashoggi.”

The decision to grant the crown prince immunity has outraged activist groups who have been trying for years to see that he faces some type of consequence for the murder of Khashoggi. Democracy for the Arab World Now said in a statement that “The Biden administration’s decision was an unnecessary, elective action that will serve only to undermine the most important action for accountability for Khashoggi’s heinous murder.” Amnesty International has documented at least 47 cases of people in Saudi Arabia being sentenced to prison terms of up to 30 years for merely peacefully exercising their universal basic human rights to freedom of expression and assembly. The prominent rights group responded to the MBS immunity declaration by stating that those behind it “should hang their head in shame…and that this is nothing more than a sickening and total betrayal.” Additionally, they expressed that the decision sends a deplorable message that those in power are free to operate above the law with total impunity.

Jamal Khashoggi was a prominent and well-respected Saudi journalist, who for years was close to the Saudi royal family and even served as an advisor. When he fell out of favor, he went into a self-imposed exile and moved to the United States, where he wrote columns criticizing the Saudi government’s policies. He visited the Saudi consulate in Istanbul to obtain documents and was murdered. The U.S. intelligence community concluded that the Saudi Crown Prince approved the killing of Khashoggi. The report detailed how a group of Saudi operatives arrived in Istanbul back in 2018 to commit the heinous killing, noting that MBS viewed Khashoggi as a threat to Saudi authorities and thus wanted him silenced in any way possible. Recently, it became apparent that the Saudi government was worried enough about the pending lawsuit against MBS when he was named prime minister – a title usually held by the king – just two months ago in September. Impartial observers have outlined how the move was clearly aimed at strengthening his case for sovereign immunity, and predicted that it may in fact end up doing so. 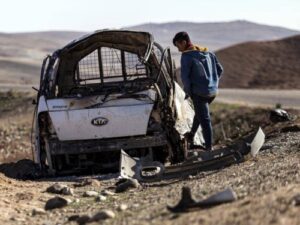 There is concern regarding the potential for further escalation in the face of missile barrages from both Turkey and Iran. (Photo from AP)

This week, Kurdish regions of northern Syria and Iraq were subjected to aerial attacks from both Turkey and Iran, as each launched their own air strike campaigns. Reports of exactly what the targets were and who was killed vary. According to Turkish Defense Minister Hulusi Akar, Turkey struck 89 key targets across Syria and Iraq, all of which were militant bases. The Syrian Democratic Forces (SDF), however, claim that Turkish air strikes killed 14 people, 11 of which were civilians. They also contended that the air strikes destroyed a power plant and a hospital, among other civilian locales. In Iraq, where both Iran and Turkey struck, a total of 58 deaths were reported, all of which were non-civilian. Iraq’s government, though, has denounced the attack as a violation of its sovereignty.

Whether the deaths were civilian or military, some analysts have argued that the justifications behind the air strikes were dubious in the cases of both Turkey and Iran. Turkey states that it is seeking justice for the 6 deaths and many injuries sustained when a bomb exploded on a busy street in Istanbul last week. Investigations concluded that the bombing was orchestrated by the Kurdistan Workers Party (PKK) and their Syrian Kurdish YPG militia counterpart. However, there are those who are skeptical of these allegations due to the identity and tact of Turkey’s primary suspect. They have expressed that she did not place the bomb like someone of her supposed training as a PKK agent would allow, being that she took a taxi through a street lined with security cameras. The PKK has not taken credit for the attack. As for Iran, its leaders purport that Iranian Kurds in Iraq are inciting the protests that are sweeping the nation. Iran first attacked the semi-autonomous Kurdish region at the end of September, killing 18. It may well be that both Ankara and Tehran are fishing for scapegoats. Both countries have been at odds with Kurdistan for years.

Seemingly in response to these attacks, the Kurdish YPG militia fired a rocket into Turkey on Sunday – the same day of Turkey’s attack – injuring eight. The SDF had promised retaliation, and it is unclear if more is to follow. President Erdogan promised on Tuesday that Turkey would be sending ground forces into Syria as well, which risks increasingly exacerbating tensions. The decision is not altogether shocking, as Turkey has sent troops into northern Syria three times since 2016. This time, though, Kurds face mounting tensions from two powerful entities. Between Turkey’s air strikes on Sunday and Iran’s the following day, there is a sense of palpable fear in Kurdish areas that is more than warranted, and it appears that the state of affairs will only unravel further from here. The juxtaposition of Turkey and Iran both carrying out attacks on Kurdish areas and positions in northern Syria and Iraq has prompted concern regarding the potential for further escalation, and it remains to be seen how things transpire in the coming days and weeks.