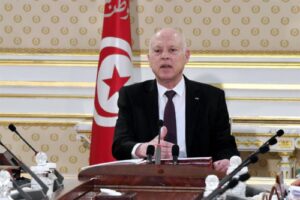 Experts have warned that Saied’s draft constitution would codify his expanded powers. (Photo from AFP)

An array of Tunisian political and civil society groups have expressed justifiable opposition to President Kais Saied’s new draft constitution. Saied has been ruling by decree for almost a year following his late July 2021 power grab whereby he dismantled many of the country’s democratic institutions and has since suspended the parliament, dissolved the independent judicial council, shut down the anti-corruption body, and made plans to amend the constitution. His new draft constitution would give vast and unchecked powers to the president, with groups and analysts warning that the changes are aimed at paving the way for absolute autocratic rule. Among the troubling proposed modifications includes one to introduce a presidential system of government to replace the mixed presidential-parliamentary system laid out in the 2014 constitution. Saied’s new draft constitution would provide him with ultimate authority over the full government and judiciary. A referendum is due to be held in Tunisia on July 25th – the one-year anniversary of Saied’s seizure of powers – regarding the proposed constitutional changes.

There are a variety of concerns with the elements of Saied’s new draft constitution and the process behind it. With regards to altering the political system from a mixed presidential-parliamentary one into a purely presidential form, this would give Saied several authoritarian-like powers such as the unrestricted means to put forth draft laws, the ability to appoint and remove government ministers and judges, the capacity to dissolve parliament, and the sole responsibility for proposing treaties and drafting state budgets. Previously, a substantial amount of political power was more directly wielded by the parliament, which took the lead role in appointing the government and approving legislation. Additionally, unlike the 2014 constitution which was written by a constituent assembly that was elected in the aftermath of the country’s revolution, Saied’s new draft constitution was formulated by a committee that he handpicked. Thus, and rightfully so, this process has been denounced by many observers as undemocratic. As one expert analyst highlighted, “The drafting process was devoid of any legal basis, democratic legitimacy, inclusivity, accountability, and transparency – behind closed doors, an illegitimate committee drafted a constitution that does not reflect the views of all Tunisians.”

As a result, most civil society groups and political parties in Tunisia are opposed to Saied’s new draft constitution, pointing out that it was drawn up unilaterally and therefore lacks legitimacy. The head of the committee himself that Saied put together in order to prepare the initial draft of the constitution – Sadok Belaid – stated that the president’s version was “dangerous and paves the way for a disgraceful dictatorial regime.” He also outlined how Saied’s final iteration did not resemble the draft that the committee had prepared, as it was significantly rewritten. The head of Tunisia’s prominent UGTT union commented as well that the proposed new constitution presented a threat to democracy in the country.

Reputable international rights groups have also chimed in with their unease. Amnesty International, for example, has decried the fact that the new constitution undermines institutional guarantees for human rights by among other things, diminishing the independence of the nation’s judiciary. The organization also voiced issues with the unchecked powers that it would grant the president, and how this could be used to diminish freedoms and human rights. Additionally worrying is the fact that the new draft only maintains some provisions of the 2014 constitution – one that was produced by an elected body via a two-year-long inclusive and transparent process and that contains strong human rights safeguards. Ultimately, as Tunisia approaches a July 25th national referendum, critics of the draft constitution have expressed fear that it would push the country further back towards autocracy. 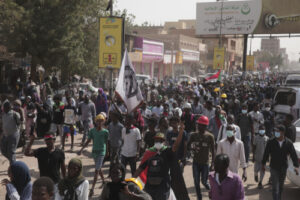 Demonstrators have called for an immediate return of the civilian government and democratic transition process that was in place prior to last October’s military coup. (Photo from AP)

Sudan’s massive pro-democracy movement has urged for continued protests demanding an immediate end to military rule. Large-scale and nationwide demonstrations have taken place ever since last October’s military coup, which derailed the fragile democratic transition process in the country. Security forces have engaged in a brutal and violent crackdown against protesters over the past eight months, but even in the face of this, thousands of Sudanese citizens have carried on with huge demonstrations. In recent days, members of the pro-democracy movement have expressed skepticism at coup leader Abdel Fattah al-Burhan’s claims that the military will step aside and allow civilian forces to assume power, with widely-held suspicions that security forces have no genuine intention of actually doing so. His announcement does indicate though that al-Burhan and others are worried about the persistence of the pro-democracy campaign, with some analysts arguing that civilian forces do possess a real chance to push the military to relinquish power if they come up with a political map quickly. Thus, resistance blocs and committees are believed to be attempting to build a new front that could assume executive functions and advance the pursuit of full civilian rule.

Since the military seized power in a coup back in October 2021, the pro-democracy movement in Sudan has been demanding that they be removed before any form of negotiations take place between political entities to form a transitional government led by civilians. Thus, experts have forecasted that al-Burhan’s recent statement is unlikely to appease those demonstrating against the military takeover. Additionally, pro-democracy groups have consistently asserted that they will not negotiate with the military, and have called for them to immediately hand over power to a civilian government. One of the major reasons for this is the fear that dialogue with the military might produce another power-sharing deal that would legitimize their grip over Sudanese politics and the economy. Further evidence that al-Burhan’s comments are unlikely to deter protests was provided by the fact that even in the aftermath of his televised address, new demonstrators emerged across the capital city of Khartoum.

Widespread and large-scale pro-democracy protests have routinely taken place across Sudan following last year’s military coup. Recently in late June, tens of thousands of Sudanese citizens took to the streets of Khartoum and Omdurman to mark the third anniversary of the similar massive demonstrations during the uprising that overthrew long-time autocratic ruler Omar Al-Bashir. Nine civilians were killed and at least another 629 were injured, as security forces deployed a violent crackdown against the protesters. As has become a repeated brutal tactic during the longstanding demonstrations, they fired barrages of stun grenades and tear gas into the crowd gatherings. Internet and phone services were disrupted as well, and it was also reported that security forces tried to storm hospitals where large numbers of those wounded were being treated. United Nations officials expressed serious concerns with the continued use of violent force by security forces in Sudan, and domestic public health organizations denounced the attempts to attack medical facilities.

In a news conference this week, the Forces of Freedom and Change (FFC) – a pro-democracy coalition of parties that were involved in the Sudanese government before the military coup – emphasized the importance of consensus on a cooperative political vision for Sudan moving forward. The FFC also highlighted the need to unite with other resistance committees and groups to ensure the best possible prospects for the reinstatement of a civilian government. In an effort to maintain pressure on the coup leaders, pro-democracy forces like the FFC have called for continued protests, sit-ins, and strikes across the country.

A multitude of independent examinations by reputable organizations have all concluded that Abu Akleh was killed by Israeli forces. (Photo from AP)

This week, the U.S. Department of State released an official statement regarding the murder of respected Al-Jazeera journalist Shireen Abu Akleh, vaguely expressing that she was “likely killed by Israeli military gunfire” but failing to draw a definitive conclusion about the origin of the bullet that struck her. Rights and social justice activists have criticized the State Department’s language, expressing disappointment that they have “muddied the water” and failed to have the moral courage to clearly implicate Israel for the crime. While a host of independent investigations by reputable organizations have all found that Abu Akleh was killed by Israeli forces, the U.S. State Department claimed that the bullet was too damaged to make clear conclusions. Israeli human rights group B’Tselem labeled the State Department’s remarks as “U.S.-backed Israeli whitewash” and pointed to the fact that all other examinations so far have found that Israel is responsible for the killing. Importantly as well, rights and social justice activists lamented how vague statements like this open the door for potential impunity and a lack of accountability.

The U.S. State Department’s positioning on the killing of Abu Akleh has disheartened rights advocates regarding the failure of the entity to call out Israel for its behavior – even when it commits crimes against journalists and United States citizens. Thus, rights groups and a significant number of lawmakers in Washington have continued to urge for a comprehensive and fair investigation into the killing. Recently, The Committee to Protect Journalists (CPJ), a United States watchdog, reiterated those calls and the need for accountability. In a statement, CPJ officials voiced that “The United States should either take the lead in investigating Abu Akleh’s death in a fully credible and transparent manner, or it should support international efforts to seek justice on behalf of her and her family.” The targeting of journalists is a crime under international law, and the deplorable actions of Israeli forces certainly warrant intense scrutiny and examination. Above all, activists sincerely hope that there will be repercussions for the crime, particularly as the official comments from the U.S. State Department seem to show a non-committal attitude towards the human rights violation and a desire to sweep the incident under the rug ahead of a visit by U.S. President Joe Biden to Israel and Palestine later this month.

The U.S Security Coordinator (USSC)’s investigation did not present official conclusions on the bullet’s origin, despite the fact that all of the other evidence points to the Israeli military. The USSC findings also claimed that there was no evidence for deliberate intention, but rather blamed a chaotic and messy combat scene with “tragic” results – despite the fact that all independent examinations to-date have ruled out the initial Israeli fabrication that crossfire during a clash with Palestinian militants may have resulted in the killing of Abu Akleh. Furthermore, the Israeli raid conducted at the time of Ms. Abu Akleh’s murder was itself a violation of international law, as it took place in the illegally-occupied West Bank. For Palestinians, Abu Akleh’s death highlights the dangers of living under illegal Israeli military occupation, and soldiers accused of heinous crimes are rarely held accountable.

Activists have tried to draw attention to how the killing of Shireen Abu Akleh is part of a troubling trend of growing and more blatant Israeli human rights violations against Palestinians. Due to this, accountability is of the utmost importance in order to deter continued abuses like this.