Welcome to our NIF Newsletter. This week, we recap Wednesday’s NIF Zoom event regarding the shortcomings of the Abraham Accords. Meanwhile, in our news headlines: thousands of Israeli extremists assault Palestinians in a far-right march through Jerusalem’s Old City, and the truce in Yemen is extended for an additional two months after aid agencies urge for such action to be taken due to its positive humanitarian impacts.

This week, the National Interest Foundation (NIF) hosted a Zoom event discussion regarding the shortcomings of the Abraham Accords. The event focused on the claimed intention of the accords, and the actual facts on the ground regarding the daily lives of Palestinians in the West Bank and Gaza Strip. The discussion covered the ongoing Israeli human rights violations against Palestinians and what steps moving forward can be taken. Our speakers for the event were Dr. Mustafa Barghouti, Secretary General and Co-Founder of the Palestinian National Initiative (PNI); and Maha Hussaini, Strategy Director of Euro-Med Human Rights Monitor. The event was moderated by Khaled Saffuri, Founder and President of the National Interest Foundation (NIF).

In her remarks, Ms. Maha Hussaini addressed the vast number of human rights abuses and crimes against humanity committed by Israel toward Palestinians. She explained that the humanitarian conditions for Palestinians have drastically decreased since the Abraham Accords have taken effect. Citing the deteriorating economic and health conditions in the Palestinian territories as examples, Hussaini showed the direct correlation between dwindling regard for human rights and the implementation of the accords. She drew parallels of the current Israeli-Palestinian affairs to that of apartheid in South Africa, as highlighted by extensive and thorough reports by Amnesty International and other reputable rights groups. Ms. Hussaini outlined that strong political will and international sanctions, like those against the apartheid regime in South Africa, would be imperative in deterring Israel’s behavior.

Dr. Mustafa Barghouti echoed Ms. Hussaini’s comments, delving into some of the ongoing Israeli human rights abuses. In particular, he examined the issues of restricted travel for Palestinians and the Israeli-implemented highway segregation blocking Palestinian communities from each other. Dr. Barghouti also touched on the economic failures of the Abraham Accords in improving the daily lives of Palestinians. He expressed how Israel’s actions have shattered the viability of a legitimate two-state solution, and that due to this, making strives towards one democratic state has gained significant traction in recent years as the way to put an end to discriminatory Israeli policies against Palestinians. Additionally, Dr. Barghouti spoke about how the governments that decided to sign on to the Abraham Accords did so despite the fact that popular opinion across the Middle East – including in those countries themselves – is opposed to normalizing ties with Israel under the current circumstances without fair concessions to Palestinians in their pursuit of social justice.

During the Q&A section of the Zoom event, one of the main areas of focus was further elaboration on how the Abraham Accords have had no positive humanitarian effect. Furthermore, while Israel gains normalization from several Arab nations, it was pointed out that those states are seeking to enhance tech and economic cooperation. A question was posed about whether the ongoing oppression from Israel would elicit a unified response from Palestinians, and the speakers offered their insight into what area should be coalesced around. Overall, the Zoom discussion provided analysis into the worsening human rights conditions for Palestinians due to Israeli aggression in the aftermath of the signing of the Abraham Accords. With deplorable and widely-condemned murders of journalists and continued annexation of Palestinian land via illegal settlements, Israel has only become more blatant in its disregard for international law. Ultimately, this has directly disproven the claimed intentions of the accords which have in actuality resulted in further Israeli human rights abuses as opposed to mitigating them. 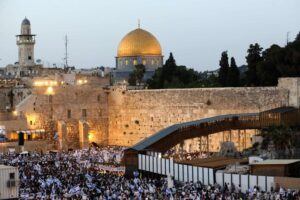 There has been a disturbing trend of extremist Israeli groups committing violent acts against Palestinians. (Photo from AFP)

This past Sunday saw tens of thousands of far-right Israeli extremists parade through the heart of Jerusalem’s Old City, assaulting Palestinian shop owners, journalists, residents, and onlookers as they chanted racist and genocidal slogans like “Death to Arabs” and “may your village burn.” Some of the participants also celebrated the death of Palestinian journalist Shireen Abu Akleh, and attacked media teams while cursing at reporters and interrupting live broadcasts. An estimated at least 70,000 took part in the provocative and destructive march, which was organized for “Jerusalem Day,” a holiday which while claiming to commemorate the “reunification” of the city in actuality marks the beginning of Israel’s ongoing illegal occupation of East Jerusalem. Peace and social justice activists have rightly denounced the regrettable behavior, which saw hundreds injured and a wave of property damage. Incendiary actions like this only serve to fuel animosity at the array of Israeli human rights violations and abuses committed against Palestinians which include such violence, unlawful land confiscations, the expansion of illegal settlements, and discriminatory policies.

During the march, there were multiple acts of violence perpetrated by the participants and Israeli police forces. The alarming violence that erupted led to more than 165 injuries ranging from heavy tear gas inhalation to beatings and wounds from live rounds and rubber-coated steel bullets. There were also repeated instances of the extremists assaulting Palestinian residents and damaging property. While police cleared Palestinians out of the normally busy area in several instances, observers highlighted that many of the Israeli assailants were not apprehended. The march included the waving of flags, the singing of ultra-nationalist songs, and the shouting of multiple racist chants, among the aforementioned violent attacks. Some of the extremist groups also stormed Al-Aqsa Mosque, raising fears over the site there as well. Analysts criticized the fact that Israeli police forces allowed this behavior to take place while at the same time cracking down against Palestinians in the vicinity. The actions of the police have been pointed to as yet another example of biased treatment toward particular individuals.

The violent march comes at a time when Israel is under heavy condemnation for its violent raids and the murder of reputable Palestinian-American journalist Shireen Abu Aqleh. At least 35 Palestinians have been killed in recent Israeli military operations and raids, some of which have been children. Israeli forces have raided Palestinian towns and villages to demolish homes, and have often killed civilians as well. Israel’s behavior in this regard has been denounced by rights groups and activists, who have also outlined its destructive role in fueling animosity and a sense of injustice. These actions, combined with the deplorable violence that took place during this past Sunday’s marches, all contribute to exacerbating tensions.

Palestinian Prime Minister Mohammed Shtayyeh condemned the march as an “aggression which crossed all red lines.” For many Palestinians, behavior like this from Israeli extremist groups and forces is unfortunately all too commonplace. They see an Israeli occupation force continually using violence to enforce its rule and push Palestinians from their generational homes. Experts have warned of the detrimental impact that actions like this have on peace and stability, and the possibility of an outbreak in armed conflict similar to that which transpired back in May of last year. Despite this, the Israeli government remains complicit in enabling extremists and stoking violence, and therefore social justice activists have urged for concrete measures to be taken by the international community to deter this type of behavior.

Extension of the Truce in Yemen 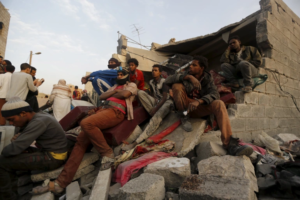 Experts pointed out that a failure to extend the truce would lead to worsened human rights conditions and scarcity of critical aid services. (Photo from Reuters)

This week, with the critical two-month truce between the warring parties in Yemen set to expire, the United Nations recently announced that an agreement to extend it for an additional two months had been reached. Human rights activists have strongly supported the ceasefire, with over three dozen calling for an extension to come into effect before the deal elapses. The truce has been integral to the lowering of fatalities and the allowing of humanitarian aid to those most affected by the devastating conflict. Initially, talks to extend the truce had made little progress with observers concerned that the discussions would end and the vital truce agreement may not be extended further. This, it was worried, would have damaging ramifications on the state of human rights as important aid services could become increasingly difficult to disperse to those in need in Yemen; especially with the ongoing global food crisis due to the war in Ukraine. With the latest developments that have transpired, the extension of the truce was slated to officially take place when the current period expired on June 2nd at 7pm Yemen time.

The United Nations-brokered truce has been championed by human rights activists, peace advocates, and security experts. The arrangement has allowed for critically-needed food and medical supplies to reach those most harmed by the war, particularly vulnerable children and families. As a result of global food shortages, in large part due to the reduction in wheat production that has been caused by the illegal and destructive Russian invasion of Ukraine, there is an even greater risk of catastrophic food insecurity in Yemen. The longstanding conflict in Yemen, which has killed at least 377,000 people, has seen a significant reduction in war-related fatalities since the truce went into effect back in early April. However, the fallout from the conflict has still had lasting impact on Yemeni citizens who still struggle to receive necessary aid and human services.

While the undeniable need for humanitarian aid focused particularly on food shortages has always been evident throughout the course of the war in Yemen, the potential end of the truce brought fears that this could worsen considerably in the country. Due to the Russian invasion of Ukraine, the global community has experienced an increasingly troubled state of food access, most notably in wheat. As Ukraine is regarded as the “bread basket of Europe,” much of the gulf region in the Middle East is reliant on that wheat supply. Therefore, the need for an extension of the truce to ensure that food can flow to those affected by the Yemeni conflict is essential under the given circumstances.

In the face of the urgent and widely-understood importance of extending the truce in Yemen, talks at the United Nations had largely stalled. U.S. Ambassador to the United Nations, Linda Thomas Greenfield, had stated earlier this week that the talks “haven’t ended yet but seem to be in a bit of trouble.” It appeared as though the truce was in real danger of elapsing, and analysts had warned that should this have happened, there could be a serious increase in violence between the Saudi-led coalition and the Houthi rebels.

The effects of an elapsing of the truce could have resulted in a likely dramatic uptick in war-related casualties, the launching of new military campaigns, and a harmful reduction in Yemeni civilian access to paramount aid services. Thus, observers have praised the decision to extend the truce in Yemen for an additional two months.