Welcome to our NIF Newsletter. In this week’s headlines: concern mounts regarding the nature of the Saudi Arabia state-owned sovereign wealth fund’s $2 billion investment of Jared Kushner’s private equity firm following indications that classified information was shared with the Saudi crown prince, Israeli forces elicit condemnation for storming the Al-Aqsa Mosque and brutally dispersing worshippers, mobs engage in anti-Muslim violence in India as rights activists criticize the role of the Modi government in stoking religious tensions, and Turkey conducts military operations in northern Iraq after past strikes in Syria. 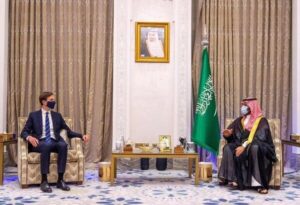 Growing evidence supports that the recent $2 billion investment into Kushner’s firm was in exchange for classified intelligence. (Photo from AFP)

Concerns continue to grow as new evidence is uncovered about the nature of Jared Kushner’s ties to Saudi Arabia’s Crown Prince Mohammed bin Salman (MBS). Revelations suggest that the $2 billion entrusted by Saudi Arabia’s state-owned sovereign wealth fund to Kushner’s firm, Affinity Partners, may have been reciprocity for classified information given to MBS by Kushner during his time in the Trump administration. A recent legal document released has shown that Jared Kushner discussed intelligence about former Saudi Crown Prince Muhammad bin Nayef’s plans for a legal coup d’état in 2017, and that Kushner and his allies got word of this to MBS – which derailed the move and led to bin Nayef’s imprisonment. Thus, many U.S. intelligence experts have stated that it was highly plausible that Kushner indeed gave MBS intelligence that allowed him to take power. The former Crown Prince bin Nayef had suspected that Kushner and MBS were working against him, and even figured that there was some sort of financial arrangement between them that would ultimately come to light.

Storming of the Al-Aqsa Mosque 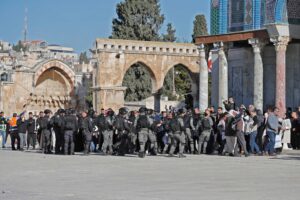 Israeli police were criticized for entering the mosque compound and attacking worshippers. (Photo from AFP)

The actions of Israeli forces have again drawn condemnation over this past week after the violent storming of the Al-Aqsa Mosque. Israeli police raided the mosque compound, using batons, rubber-coated bullets, and tear gas to disperse and attack large crowds of gathered worshipers. An array of documented evidence demonstrated how Israeli forces brutally beat and assaulted mosque staff and ordinary citizens alike, including elders, refuting their claims that they were merely “re-establishing order” and “removing demonstrators.” Additionally troubling was the fact that humanitarian and emergency service organizations highlighted that many of their medics were prevented from reaching those who were injured and in need of immediate assistance in the mosque compound. Provocative social media posts calling for Jewish Israelis to go to the Al-Aqsa Mosque and take over the site inflamed the situation even further, as have multiple waves of settler incursions aided by the Israeli police. Rights and social justice groups are concerned that Israel’s incendiary actions will only serve to exacerbate tensions and could lead to an escalation in violence. 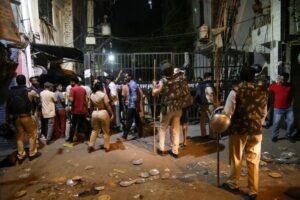 Observers have drawn attention to how the inaction of the Modi government has emboldened extremists. (Photo from AFP)

Troubling and large-scale religious violence has taken place throughout India in the preceding weeks. During a recent Hindu religious procession, mobs desecrated multiple mosques, chanted slogans inciting genocide against Muslims, and physically assaulted local citizens. Particularly worrying is the fact that instances like these have become far too common under the government of Prime Minister Narendra Modi. Rights activists and opposition members have criticized Modi and his Bharatiya Janata Party (BJP) for their inaction and downplaying of the rise in religiously-motivated violence – both of which have emboldened extremists. Additionally, the BJP has been accused of promoting divisive policies that inflame religious tensions and looking the other way while Hindu vigilante groups operate more freely within society. Many families have also documented the inability to register incident reports with authorities, some of whom even have links to the discriminatory riots.

Turkey has launched a military operation in northern Iraq with the aim of dislodging the PKK from the region. (Photo from Anadolu Agency)

Turkey has launched a new ground and air operation in northern Iraq in an attempt to neutralize the Kurdistan Workers’ Party (PKK), which is operating there. The PKK is classified as a terrorist organization by the United States, the European Union, and Turkey. Dubbed “Operation Claw-Lock,” jets and artillery were used to strike suspected ammo caches, bunkers, and headquarters currently being used by the PKK. The strikes were also coupled with ground operations conducted by Turkish special forces. This recent military action is in response to reports that the PKK was planning a large-scale attack in Turkey. The cross-border operations also have the wider goal of securing broader peace and stability in the area, according to Turkish defense officials. The military action has the support of the regional autonomous government in Erbil, while the central Iraqi government has voiced unease in the past and accused Turkey of violating their territorial sovereignty. The latest strikes this week come two months after a similar operation was carried out in Syria.