Welcome to our NIF Newsletter. In this week’s headlines: Jared Kushner’s private equity firm receives a $2 billion investment from a fund led by the Saudi crown prince, Israeli forces draw criticism for a wave of violent raids and the killing of a Palestinian human rights lawyer in the illegally-occupied West Bank, social justice advocates express concern with Turkey’s decision to transfer the Jamal Khashoggi murder trial to Saudi Arabia, and jailed Egyptian pro-democracy activist Alaa Abd El-Fattah obtains British citizenship in hopes of securing his release from prison.

The nature of Kushner’s ties to the Saudi crown prince have come under further scrutiny. (Photo from Getty Images)

Former U.S. President Donald Trump’s son-in-law Jared Kushner has drawn fresh criticism following revelations that his private equity firm secured a $2 billion investment from a fund led by Saudi Crown Prince Mohammed bin Salman last summer. The news has heightened already existing concerns regarding Kushner’s use of his government position to further business interests under the Trump administration. While serving as senior adviser to Trump, the nature of Kushner’s relationship with Saudi authorities was described as troubling, with some observers indicating that the business dealings of Kushner and Trump had a notable influence on the administration’s foreign policy decisions with Saudi Arabia. Trump officials regularly shielded bin Salman and others from justifiable condemnation for their involvement in the Khashoggi murder and the destructive war in Yemen, despite bipartisan rebuke over both. The Saudi crown prince is reported to have overruled and moved forward with the financing of Kushner’s firm, even in the face of objections from entities tied to the investment fund. 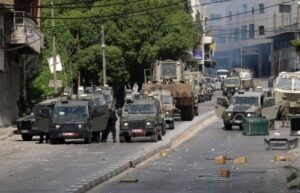 Israel has been condemned for its use of excessive and lethal force after the killing of multiple unarmed civilians. (Photo from AFP)

Israeli forces have been rebuked for a wave of violent raids in the illegally-occupied West Bank, including the killing of a Palestinian human rights lawyer. Muhammad Hassan Muhammad Assaf is one of many Palestinian civilians who have been shot dead during recent Israeli raids on Palestinian towns. Among some of the other victims are a 14-year-old boy and a blind mother of six. Assaf had just dropped his nephews off at school when he was shot in the chest by Israeli forces in the Palestinian city of Nablus. Heavy-handed raids and the killing of innocent civilians are not uncommon for Israeli security forces. Rights groups have repeatedly condemned Israel for cracking down on entire towns and villages to capture individual assailants, an incendiary action which only fuels further violence and results in the loss of innocent lives. This policy has been denounced as a form of collective punishment, which is illegal under international law. In light of the latest developments, there is growing concern regarding the potential for an escalation in violence similar to that which transpired in May of last year. 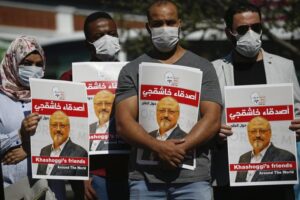 A Turkish court recently decided that it would transfer the trial of 26 suspects linked to the brutal 2018 killing of journalist Jamal Khashoggi to Saudi Arabia. The move has been broadly criticized by rights and social justice advocates who have highlighted that those responsible will not be brought to justice if this happens due to Saudi authorities’ link to the murder. Reputable intelligence agency findings in the past have determined that Saudi Crown Prince Mohammed bin Salman approved the assassination of Khashoggi, who was a contributing columnist for the Washington Post and often wrote critically of the Saudi government and its de facto leader. Analysts and experts have pointed out some of the potential underlying motivations behind the decision to transfer the trial, such as the belief that it may be part of Turkey’s efforts to improve its relations with Saudi Arabia. Nevertheless, it is feared that the move is a step towards diminishing the chance for justice in the disturbing case. There is also worry that it would create a dangerous precedent regarding lack of accountability for the killing of dissidents and journalists, and further jeopardizes freedom of press globally. 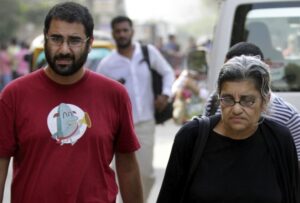 Abd El-Fattah’s family stated that he gained the citizenship through his mother, who was born in London. (Photo from AP)

Alaa Abd El-Fattah, a leading pro-democracy activist in Egypt, has secured a British passport in an effort to put pressure on the Egyptian government to release him. Abd El-Fattah has been imprisoned on trumped-up charges such as “spreading false news undermining national security” and “using social media to commit a publishing offense.” Multiple reputable rights groups, including Amnesty International and Human Rights Watch, have denounced the charges and his conviction, outlining that the trial had multiple fair and due process violations. Abd El-Fattah was sentenced to a five-year prison term back in December 2021, and still has an upcoming trial for the other spurious charges. It is the hope of Abd El-Fattah and rights advocates that this latest development will place more pressure on the El-Sisi government to free him as a British citizen since in recent years, several Egyptian political prisoners who hold foreign passports have been released. Abd El-Fattah is being held in the Tora prison complex, where he has detailed suffering torture and abuse at the hands of the guards. He was also denied the right to an attorney during his pre-trial detention, and is currently on a hunger strike.