Welcome to our NIF Newsletter. In this week’s headlines: a two-month ceasefire agreement is reached between the warring parties in Yemen, pro-democracy advocates denounce Tunisian President Kais Saied’s move to formally dissolve the country’s parliament as he continues to enact measures aimed at restoring autocratic rule, Russian forces elicit widespread condemnation in light of disturbing human rights violations committed in the Ukrainian town of Bucha, and the International Criminal Court begins its first trial addressing the atrocities in Darfur. 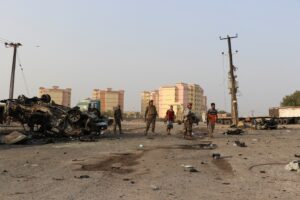 It is the hope of many humanitarian organizations that the ceasefire will allow aid supplies to flow more freely. (Photo from Reuters)

A ceasefire has recently gone into effect between the warring parties in Yemen. The United Nations-brokered truce was announced during this past week whereby both the Saudi-led coalition and Houthi rebels agreed to a halt of all offensive operations. This two-month arrangement is significant as it marks the first time since 2016 that the sides have publicly consented to a temporary cessation of hostilities. International observers and analysts remain cautiously optimistic however, as ceasefires in Yemen have been violated and ineffective before. Above all, aid agencies and rights activists are hopeful that this break in the longstanding Yemeni conflict will allow for much-needed humanitarian supplies to flow more easily and help alleviate the acute suffering of the country’s civilian population. For years, the crisis in Yemen has been described as the worst such disaster in the world. A staggering number of over 17 million people are food insecure, and the war has also left an estimated 4.2 million displaced. The Saudi-led coalition has played a particularly destructive role in exacerbating the humanitarian suffering through its aerial bombardment, which has devastated residential homes, hospitals, roads, schools, and other civilian infrastructure – eliciting justifiable condemnation. 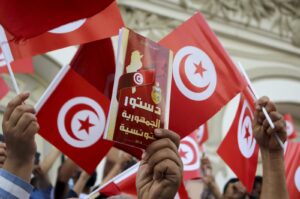 Pro-democracy advocates have denounced Tunisian President Kais Saied’s recent move to formally dissolve the country’s parliament, as he continues to draw criticism for enacting measures aimed at restoring autocratic rule and consolidating his power. Saied’s maneuver came mere hours after members of the already suspended legislative body held a plenary session online. During this, they voted to end his exceptional measures, including a reversal of the suspension of parliament and the reinstatement of the prime minister. Following Saied’s announcement, he also vowed that the legislators who opposed his presidential rulings in the virtual meeting would be prosecuted for “conspiring against state security.” More than half of the 216 parliament members who were present at the meeting have been summoned for questioning in a clearly politically-motivated targeting of critics. This is yet another example in an alarming trend by Saied, who has been consistently initiating anti-democratic actions to try and revert Tunisia back to one-person rule. 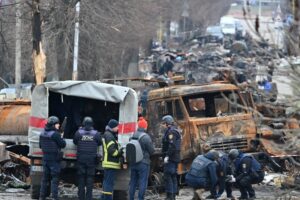 The atrocities in Bucha have been met with outrage from the international community. (Photo from AFP)

World governments have expressed renewed condemnations of the Russian invasion of Ukraine after evidence surfaced of disturbing human rights violations committed by Russian forces against civilians in the town of Bucha, a suburb of Kyiv. The small town of slightly over 35,000 was recently retaken by Ukrainian troops back in early April, having previously been held by Russian forces for nearly a month. Despite the documented proof, including photos, videos, mass graves, and eyewitness testimonies, Russia has attempted to deny that it had any part in the murder of civilians. The Kremlin has regrettably called the photos and videos of the killings “fakes.” Alarmingly, many of the bodies found in Bucha were shot at close range and had their hands bound. Countries, including the United States, the United Kingdom, Germany, France, and Poland released statements expressing their outrage, and major international institutions such as the United Nations, NATO, and the European Union condemned the atrocities as well. Fresh sanctions against Russia have also been announced by a multitude of nations in an effort to punish authorities for the troubling human rights violations.

Ali Kushayb is the first to be tried for war crimes and human rights abuses committed in Darfur. (Photo from ICC)

The first trial for war crimes committed in Darfur opened at the International Criminal Court (ICC) earlier this week. Former Sudanese militia chief Ali Muhammad Ali Abd-Al-Rahman, commonly known as Ali Kushayb, faces more than 30 charges of crimes against humanity for heinous atrocities against civilians. He played a major role in the 2003 government-led campaign under former despot Omar al-Bashir to suppress a rebellion in Darfur, the subsequent conflict of which saw over 300,000 people killed and 2.5 million forced to flee their homes. The militia forces under his command took part in an array of atrocities, including mass killings, pillaging, and torture. Kushayb surrendered to the ICC back in 2020 after 13 years on the run. Human rights and social justice activists have commended the ICC trial for shedding light on the disturbing abuses, and are hopeful that it will provide a token of accountability.