Welcome to our NIF Newsletter. In this week’s headlines: Israel hosts a summit with the foreign ministers of several Arab nations as social justice activists lament the normalization of ties in the absence of fair concessions to Palestinians, the Ethiopian government and Tigrayan forces acknowledge a humanitarian truce to allow for the much-needed delivery of aid, Human Rights Watch details the arbitrary detainment of Sudanese refugees and asylum seekers at the hands of Egyptian police, and Syria talks break down with no substantial progress made. 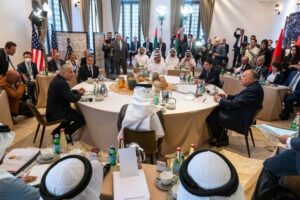 The normalization of relations under the existing circumstances has been criticized for maintaining the status quo and the illegal Israeli occupation of Palestinian territory. (Photo from AP)

Israel hosted a summit this week with the foreign ministers of several Arab nations, as social justice activists lament the normalization of ties in the absence of fair concessions to Palestinians. The warming of relations under the existing circumstances has been criticized for maintaining the status quo and the illegal Israeli occupation of Palestinian territory. The autocratic Arab regimes who signed on to the Abraham Accords broke with the longstanding regional position that was in place to try and ensure that the normalization of relations would be coupled with the attainment of concrete advancements in the Israeli-Palestinian peace process. They also did so despite the fact that the majority of citizens in Arab countries across the Middle East do not support diplomatic normalization with Israel until Palestinian rights are secured, as consistently shown in opinion polling. As such, there is a sentiment of frustration among rights advocates with the disregard of various Arab leaders to the plight of Palestinians and their struggle for social justice. Notably, Jordan’s King Abdullah II met with Palestinian President Mahmoud Abbas in the West Bank after skipping the Israeli summit. Groups of protesters were also present outside of the summit in solidarity with Palestinians, drawing attention to their absence and Israel’s continued illegal occupation. 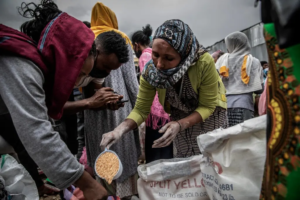 More than a third of the people in the Tigray region face an extreme lack of food. (Photo from The New York Times)

After nearly 17 months of brutal fighting, the Ethiopian government and the Tigray People’s Liberation Front (TPLF) have declared a humanitarian truce in an effort to allow for the much-needed delivery of aid services. The move comes in light of the severe humanitarian crisis that has ravaged the region of Tigray as a result of the ongoing conflict. Subject to what amounts to a blockade by the Ethiopian government, food and medical supplies have all but stopped reaching the areas that desperately need it. Aid workers have also been under attack, with both sides accused of engaging in war crimes and human rights violations. The recent breakthrough has been welcomed but also met with skepticism from some analysts, due to persisting tensions, the involvement of multiple smaller armed groups, and a lack of transparency. Humanitarian assistance for Tigray has been slowing in preceding months because of resistance from the Ethiopian government and new developments stemming from the Russian invasion of Ukraine. Experts have warned that the Russian-Ukrainian crisis has disrupted major producers of food for aid programs. 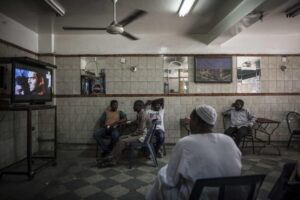 There are a large number of Sudanese refugees and asylum seekers residing in Egypt. (Photo from Getty Images)

Prominent global rights advocacy organization Human Rights Watch (HRW) has released a report detailing the troubling mistreatment of Sudanese refugees and asylum seekers at the hands of Egyptian police forces. The investigation found that at least 30 Sudanese refugees were arbitrarily arrested in 2 separate recent raids in December 2021 and January 2022. First-hand accounts by HRW uncovered that those detained were subjected to forced physical labor and abuse. Particularly concerning is the fact that these Sudanese refugees and asylum seekers fled their native country to escape violence at the hands of security forces, and are regrettably facing similar violations in Egypt as well. HRW highlighted how many of those targeted by El-Sisi regime authorities have also been active in protesting against discriminatory treatment and in solidarity with the pro-democracy movement taking place in Sudan – which has emerged in the aftermath of the recent October 2021 military coup there that derailed the democratic transition process in the country. HRW and other rights activists have called for accountability toward those responsible for the refugee mistreatment and abuse.

Latest Round of Syria Talks 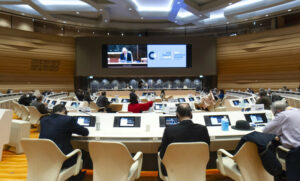 There are several barriers to the negotiation process, including the Assad regime’s lack of serious engagement. (Photo from UN)

Syria Talks Break Down with No Substantial Progress Made

The latest round of constitutional talks between the Syrian government and the opposition have once again broken down. The negotiations were hosted by the United Nations in Geneva, and it is feared that this most recent failure will likely further hamper the already sluggish peace process. The constitutional committee was formed with the goal to find common ground on issues like governance, structure of public authorities, and state identity. Established in 2019, it includes representatives from the regime, the opposition, and civil society members. Opposition figures have condemned the regime for not taking the talks seriously. Along with the government’s lack of sincere engagement, issue experts have pointed out that another significant barrier to the process is that many key stakeholders are also absent from the negotiating table. Furthermore, because of the focus on the constitutional aspect, critical topics such as alleviating the humanitarian crisis, promoting security, ending the violence, and expanding freedom rarely receive the necessary attention in discussions.