Welcome to our NIF Newsletter. In this week’s headlines: civilian casualties mount as Russian forces continue their assault on multiple cities in Ukraine, Saudi Arabia draws international criticism for its mass execution of 81 people in one day, a group of students at Georgetown University successfully block funding for an Itrek trip to Israel in solidarity with social justice for Palestinians, and more than a dozen international aid groups and U.N. agencies warn that 161,000 people in Yemen are likely to experience famine over the second half of 2022. 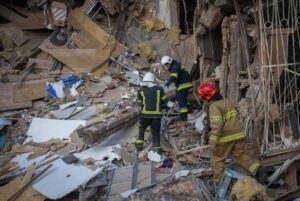 Russia’s bombardment of cities across Ukraine has had a devastating effect on the civilian population. (Photo from AP)

The war in Ukraine rages on as civilian casualties continue to mount. Multiple major population centers have been attacked, including the capital city of Kyiv. Some of the most ferocious and concerning fighting is taking place in Mariupol and Chernihiv, where accounts have emerged of Russian forces bombarding civilian targets such as a theater that was being used as a shelter. Observers have been especially alarmed over the fact that “children” was spelled out in Russian on the pavement around the theater, according to images released by the Maxar space technology company. Journalists have reported that at least 130 survivors had been pulled from the wreckage of the theater in the aftermath of the attack. Meanwhile, Russian officials have continued to deny the bombing of any civilian targets in Mariupol despite overwhelming evidence to the contrary. As a result of the ongoing Russian invasion of Ukraine, the refugee crisis continues to worsen as well, both in regards to the number of civilians that have fled the country and those that have been internally displaced. 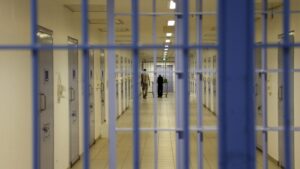 Detainees in Saudi prisons are often subjected to torture, unfair trials, and other grave human rights violations. (Photo from Reuters)

Saudi authorities have fallen under fresh scrutiny over the past week following the mass execution of 81 people in a single day on Saturday, March 12th. Rights activists around the world have condemned the troubling escalation in Saudi Arabia’s use of the death penalty. Detainees in Saudi prisons are often subjected to torture, unfair trials, false confessions, and other grave human rights violations, and advocacy groups contend that some of those who were executed had been political dissidents who were charged with false or trumped-up offenses. Many were also from the country’s Shi’a minority, which has long been oppressed by the Saudi government. Adding to the criticism is the fact that Saudi Arabia’s legal system has been accused of a lack of transparency, especially when pertaining to death penalty cases. Those recently executed included individuals convicted on questionable “terrorism-related crimes,” and others who were problematically charged with “disrupting the social fabric and national cohesion” or participating in sit-ins and protests. 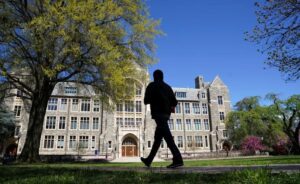 The group of students took part in the initiative to draw attention to Israel’s mistreatment of Palestinians. (Photo from Reuters)

A group of Georgetown University students have taken part in an initiative that has successfully blocked institutional funding for an Itrek trip to Israel in solidarity with social justice for Palestinians. The students highlighted the legitimate concerns with the trips and how they serve to try and de-emphasize Israel’s mistreatment and human rights abuses against Palestinians. These include the systematic discrimination and denial of rights to Palestinians, unlawful military occupation of Palestinian territory, and land seizures for illegal settlement expansion, among others. The group of Georgetown students touched on these issues when providing the reasoning for their effort to halt the use of student tuition funds for subsidizing the trip. They also outlined their grievance with the nature of the partnering entity, Itrek, who seeks to whitewash the illegal Israeli occupation of Palestine. The students have been commended by social justice and rights advocacy organizations for standing up in support of Palestinians and urging accountability for longstanding Israeli human rights violations. 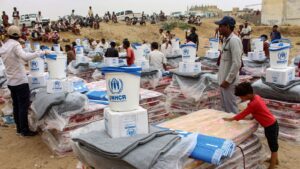 Aid workers are particularly concerned about the vulnerability of children to the food insecurity crisis in Yemen. (Photo from Getty Images)

International Aid Groups and U.N. Agencies Warn That 161,000 People in Yemen are Likely to Experience Famine Over the Second Half of 2022

The Integrated Food Security Phase Classification (IPC) expressed earlier this week that an estimated 161,000 people in Yemen are likely to experience famine over the second half of 2022. Most alarming, is the fact that this number is 5 times larger than the current figure of around 30,000. The sharp rise in projected famine cases has been extremely worrying for many aid and humanitarian organizations. The increase has been partly linked to Russia’s invasion of Ukraine, as the latter supplies nearly a third of wheat imported to Yemen. The country has already been subject to mass starvation and famine due to the Saudi-led coalition’s ongoing war in Yemen, and the Russia-Ukraine crisis has now exacerbated the issue as well. The conflict in Yemen has had a devastating toll on the nation’s civilian population and infrastructure, with the IPC report stating that 19 million of its 30 million people will likely not be able to meet their minimum food needs in the second half of this year – a troubling recent increase of more than 3 million.