Welcome to our NIF Newsletter. This week, we recap Tuesday’s NIF Zoom event regarding the 11-year anniversary of the Arab Spring and the state of freedom, democracy, and human rights in the region. Meanwhile, in our news headlines: the United Nations condemns the continued loss of civilian life as a Saudi-led coalition airstrike in Yemen kills more than 80 people, Biden administration officials talk with Qatar and others about the supplying of gas to Europe amid Russia-Ukraine tensions, and violence breaks out after an ISIS attack on a prison in Syria.

This week, the National Interest Foundation (NIF) hosted a Zoom event to discuss the 11-year anniversary of the Arab Spring and the state of freedom, democracy, and human rights in the region. Our panel was comprised of Sarah Leah Whitson, Executive Director of Democracy for the Arab World Now (DAWN); Amr Hamzawy, Senior research scholar at the Center on Democracy, Development and the Rule of Law at Stanford University and Director of the Middle East Program at the Carnegie Endowment for International Peace; Radwan Masmoudi, Founder and President of the Center for the Study of Islam & Democracy (CSID); and Fouad Ibrahim, Saudi political scientist and author. The event was moderated by Khaled Saffuri, Founder and President of the National Interest Foundation (NIF). The panelists discussed the factors behind democratic backsliding in the Middle East and North Africa, and different policies that the United States could enact to help promote democracy in the region.

Mr. Masmoudi kicked off the discussion by providing some insight regarding the coup in Tunisia, which took place last year in July. President Kais Saied originally promised to abide by constitutional law. At first, some of the Tunisian people gave him the benefit of the doubt and were hopeful that he may be able to bring forth solutions to the country’s socioeconomic shortcomings. However, it became apparent that his actions were destructive toward the system of representative democracy, as he gave himself the authority to rule by decree and suspended Tunisia’s elected parliament. All indications are that Saied’s popularity is continuing to decrease, and Masmoudi forecasted that the president will be forced to resign in the near future. This begs the question of what is next for Tunisia after a potential resignation. Mr. Masmoudi suggested a handful of steps to return the country to the democratic track. The first is to reopen the parliament as soon as possible since the legislative body is essential to the democratic process. The next step is to organize presidential and parliamentary elections in three months, which would give the new parliament the ability to rebuild civil society. Then, there would be a need to organize an inclusive dialogue on economic and social reforms, and the final step would be to create the constitutional accords. Mr. Masmoudi also discussed the situation in Libya, and how the anti-democratic bloc of the UAE, Egypt, and Saudi Arabia has been working to thwart any democratic gains in the Arab world. For this reason, he expressed that the United States and other democracies need to stop treating them as legitimate regimes.

Ms. Whitson spoke next, and underlined the importance of memorializing those who fought and died for an end to the tyranny of Hosni Mubarak, because the current Egyptian regime is trying to suppress that history. She detailed how torture and abuse are systematic and widespread in the country, and how both Democratic and Republican administrations in the United States have been complicit in arming repressive regimes in the Middle East. The democratic spirit of people in the region is not broken however, as mass protests continue to take place. Ms. Whitson proceeded to point out that many of these governments are entrenched through alliances between each other and support from western nations. There is, however, no transnational movement for democracy, and therefore democratic forces need to begin working together if they want any chance of countering these regimes. She remarked that the United States has become beholden and corrupted by defense company lobbyists, and called for the banning of officials from working for defense companies in foreign governments. Ms. Whitson voiced that if this and the arming of dictatorial regimes continues, democratic initiatives in the region will fail.

Mr. Ibrahim began his segment by delving into how important social media platforms like Twitter and Facebook were in spreading revolution during the Arab Spring. He went on to describe the various uprisings in the Middle East, and the fact that millions of people took to the streets to protest political and social inequality. Many regimes responded by brutally suppressing the protests, while others tried to quell popular unrest with the payment of social benefits and bolstering of security forces. In Saudi Arabia specifically, an eastern province began to protest against the government and demanded the release of political prisoners. A majority of these protesters were in their early 20s and an estimated 130 protesters lost their lives, with many more injured. Scores of houses were destroyed in retaliation to the protests, and eventually the uprising was quashed.

Mr. Hamzawy provided remarks and in analyzing the situation in the Arab world between 2011 and now, he commented that not only is freedom in retreat but the system of autocratic rule is being systematically rebuilt. He also expressed that the military coup in Egypt after the Arab Spring was caused by systematic issues. The challenge is trying to bolster support for democracy in places where there hasn’t been a stable democratic regime. It is very hard to sustain the popular support for democratization when authoritarians put forward narratives that are geared toward appeasing citizens, such as guaranteeing food and promising to fix economic issues. Another element that makes it difficult is the fact that there are no strong political parties or civil society mechanisms to help support the democratization process.

Loss of Civilian Life in Yemen 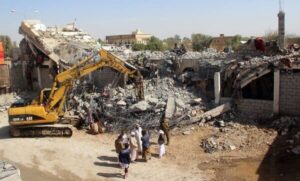 A Saudi and UAE-led coalition airstrike on a Yemeni prison run by the Houthis has killed dozens and injured hundreds more, drawing sharp condemnation from the United Nations over the continued loss of civilian life in the country. The head of Doctors Without Borders in Yemen has stated that the death toll in this one attack alone has reached at least 82 people with a further 265 left wounded. The airstrike was part of a larger coordinated military offensive following a Houthi drone attack on fuel tanks inside the UAE. A coalition spokesperson attempted to deflect blame on the Houthis for this alarming and reprehensible incident, claiming that they had not informed the United Nations or the International Committee of the Red Cross that the site needed protection from such air bombardments. This absurd assertion not only defies reason, it is a common example of the Saudi coalition’s attitude of indifference to the regrettable death and humanitarian disaster that its actions have inflicted upon the Yemeni civilian population. This recent airstrike and others like it including one against a communications center in a Yemeni port city which killed several children have renewed criticism of the coalition from the United Nations and international aid groups. 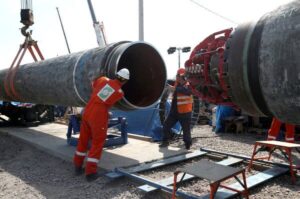 The gas supply alternatives are being considered due to the ongoing Russia-Ukraine crisis. (Photo from Reuters)

The United States is engaging in talks with Qatar about the possibility of the resource-rich country supplying Europe with liquefied natural gas (LNG). Fears that Russia would threaten or deliberately create a shortage in order to coerce European countries into accepting its aggression toward Ukraine has prompted these talks. Currently, Russia supplies Europe with LNG which passes through a pipeline that crosses Ukraine and, if it were eventually completed, through the Nord Stream 2 (NS2) pipeline to Germany. The concern among European and U.S. leadership is that Russia will use its supply of LNG to Europe as leverage in a narrative that justifies its aggression and possible offensive against a sovereign neighboring nation. Ukrainian officials have cautioned their Western counterparts since last year that Russia may use its petroleum exports to coerce Europe into a dangerous new status quo. This possibility is being taken seriously now by the Biden administration, while Russia has warned that actions against it would be politically destructive for Europe. It is expected that U.S. President Biden will speak directly with Qatar’s Emir, Sheikh Tamim bin Hamad Al Thani, next week about supplying Europe with LNG.

ISIS Attack on Prison in Syria 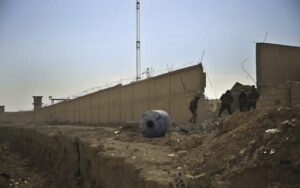 The incident signals that ISIS is growing more emboldened again and coordinating attacks against hard targets. (Photo from AP)

A recent ISIS attack on a prison in northeast Syria has elicited concern and raised fears regarding a potential resurgence of the extremist group. Analysts and issue experts point to the sophisticated nature of the incident as an indication that ISIS is growing emboldened again and may still possess the ability to carry out attacks against hard targets. The prison assault marks the largest such one in several years, as more than 100 ISIS militants launched a coordinated attack on the facility located in the Al-Hasakah province which houses over 3,000 prisoners – many of whom are ISIS-affiliated. The course of events appears to have been initiated by the detonation of two car bombs parked along the prison’s exterior walls. An attack by outside forces was then coupled with a riot within the prison whereby kitchen staff was taken hostage and the north wing of the prison fell under the control of ISIS. One of the troubling aspects of the assault was that it also forced tens of thousands of nearby residents in the area to flee their homes. Ultimately, U.S.-backed forces in Syria were able to reseize full control of the prison from ISIS in the preceding days.