Welcome to our NIF Newsletter. In this week’s headlines: the death of an elderly Palestinian-American after being detained by Israeli forces sparks widespread calls for a thorough investigation, Yemen’s Houthi rebels carry out a drone attack against an oil facility in the United Arab Emirates, the Office of the United Nations High Commissioner for Human Rights expresses alarm over the number of civilians killed this month in Ethiopia’s Tigray region, and the U.N. Special Adviser on Libya says that the country could hold its recently postponed elections by June.

Calls for Probe into Death of Omar Asaad 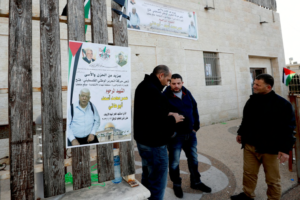 Lawmakers, officials, family members, and others have all called for an investigation to be conducted. (Photo from Reuters)

The death of an 80-year-old Palestinian-American man after being detained and harassed by Israeli soldiers has drawn widespread outrage and calls for a serious investigation. Omar Asaad had lived in the Milwaukee, Wisconsin area for several decades, before returning to the West Bank in 2009. He was heading back home last week following a visit to relatives when Israeli forces stopped his car, bound and blindfolded Asaad, and led him to a nearby building that was still under construction. Asaad’s body was later found showing no signs of life, as he remained blindfolded with a plastic zip tied around one of his wrists. The disturbing circumstances surrounding the incident have caught the attention of U.S. officials and lawmakers, with the State Department expressing that it is seeking answers from Israel over the death of Asaad. Federal lawmakers including Congresswoman Betty McCollum (D-MN), Congresswoman Marie Newman (D-IL), Congresswoman Rashida Tlaib (D-MI), and others have condemned the killing and echoed the Asaad family’s calls for a thorough investigation. The death of Omar Asaad has shed light on the realities of life for Palestinians in the illegally Israeli-occupied West Bank, as they are often subjected to egregious human rights abuses at the hands of Israeli forces.

This week’s developments have prompted fears of an escalation in hostilities. (Photo from Getty Images)

Earlier this week, Houthi forces in Yemen launched armed drones and missiles against an oil facility in the United Arab Emirates, which targeted fuel tankers owned by the Abu Dhabi National Oil Company and resulted in three deaths. The United Arab Emirates belongs to a military coalition led by Saudi Arabia that has been at war with the Houthis for years, and the recent developments have prompted fears of an increase in hostilities in the longstanding and devastating Yemeni conflict. Furthermore, analysts highlight that it complicates the efforts to de-escalate the war, and could prolong and intensify the civilian hardship taking place in Yemen. For years, international aid groups have described the humanitarian crisis there as the worst such disaster in the world, with an estimated 4 million people forcibly displaced and 5 million suffering from famine and disease. Throughout the course of the war in Yemen, the Saudi and UAE-coalition’s air bombardment has been consistently found to have damaged residential homes, hospitals, schools, and other civilian infrastructure – eliciting widespread condemnation. These airstrikes have killed or wounded nearly 20,000 Yemenis, and investigation into the matter shows that the Saudi-led coalition has been responsible for 67% of attacks and destruction of noncombatant infrastructure. In just the preceding days, at least 20 people were killed in one of the latest airstrikes on the Yemeni capital city of Sanaa. 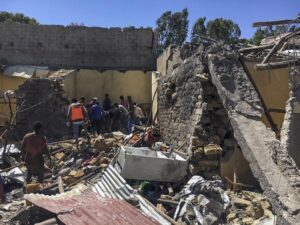 Civilians have been indiscriminately targeted by both Ethiopian and Tigrayan forces. (Photo from AP)

The United Nations Office of the High Commissioner for Human Rights (OHCHR) has expressed concern that in only the first few weeks of the calendar year, at least 108 civilians have been killed and another 75 wounded in airstrikes on Tigray. A spokesperson for the OHCHR described multiple attacks by the Ethiopian air force against civilian targets in the region including a bus, an airport, and a camp for displaced people. The attack on the camp was particularly troubling and devastating, as 59 were killed and a further 30 wounded in the densely-populated site. The OHCHR has pressed the government in Ethiopia, and its allies, to protect the country’s civilian population and verify that any targets in its ongoing military campaign are in fact combatant locations. The targeting of civilians and noncombatant infrastructure is a direct violation of international law, and the organization warned in its alarm that these attacks could be evidence of war crimes.

Status of Postponed Elections in Libya 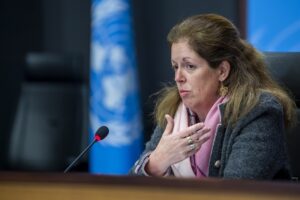 Elections that were slated to take place last month in December were postponed, in part due to concern over the potential eligibility of multiple controversial candidates. (Photo from EPA)

U.N. Special Adviser on Libya Says That the Country Could Hold Its Postponed Elections by June

U.N. Special Adviser on Libya, Stephanie Williams, has indicated that the country could hold its postponed elections by June. These were scheduled to take place last month in December 2021, but were delayed in part because of concern regarding the potential eligibility of controversial candidates like former dictator Gaddafi’s son Saif al-Islam and renegade warlord Khalifa Haftar. Authorities were worried that holding the elections at that time with such contentions may have had a destabilizing effect on the reconciliation process in Libya. Williams highlighted that the nation’s institutions have suffered from a lack of widely accepted legitimacy and that only a peaceful and collaborative political process can help to address this. She is pressing leaders to agree to a binding electoral mechanism that is not open-ended, and outlined that Libyans desire an end to the long period of transition that the country has experienced since the events of 2011.