Welcome to our NIF Newsletter. In this week’s headlines: Iraq’s parliament elects a speaker as it makes steps toward establishing a new government, rights activists criticize the arrests of two former cabinet members in Tunisia, Russian intervention in Kazakhstan risks further destabilization amid the unrest in the country, and a fire destroys hundreds of homes in a Bangladesh Rohingya refugee camp. 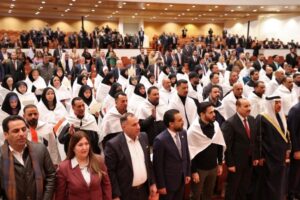 The Iraqi parliament has 30 days from its first session to elect the country’s next president, before the largest bloc can then try to form a new government. (Photo from AP)

After a brief delay in the Iraqi parliament’s opening session, the 329-member body has successfully elected a new speaker, Mohammed al-Halbousi. Speaker al-Halbousi, who will hold this position for the second time, defeated the acting speaker, Mahmoud al-Mashhadani, who was also speaker of the first parliament set in 2006. The delay in the election of the speaker occurred when certain political blocs of parties, including one led by former Prime Minister Nouri al-Maliki, claimed to hold a majority of seats. The largest political bloc, led by cleric Muqtada al-Sadr, objected to these declarations. While the election of the speaker proceeded according to the results of the recent October 2021 parliamentary elections and with the support of Muqtada al-Sadr’s party, analysts and issue experts point out that some lawmakers could still switch parties to form a different majority bloc and unilaterally determine who will head the presidency. The election of speaker is an important step in the process of attempting to establish a new government, but it also begins what is likely to be a period of political jostling among rival blocs.

Criticism of Arrests in Tunisia 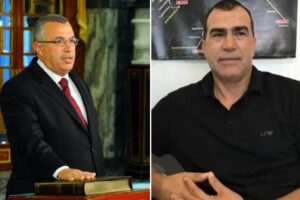 The two former cabinet members were both arbitrarily and unlawfully detained. (Photo from AP)

The actions of Tunisian President Kais Saied continue to elicit widespread condemnation, as concern grows over the political direction of the country. Saied has made blatant attempts to further consolidate power and silence his critics. In the preceding weeks, former Tunisian Justice Minister Noureddine Bhiri and former Interior Ministry employee Fathi Beldi have been arrested and imprisoned without warrants. Rights groups have characterized the unlawful arrests as abductions and further demonstrations of the threat to human rights following Saied’s overthrow of an elected government and suspension of parliament in recent months. They have also highlighted how the arrests are being used to try and quell justifiable criticism of the president’s behavior, which has fueled major fears of an authoritarian backslide in Tunisia. Saied’s actions have prompted large-scale pro-democracy demonstrations across the country, as civil society groups and citizens alike speak out against him. Both Bhiri and Beldi have not been officially charged with any crimes, pointing to the clear political nature of their unjust detainments. 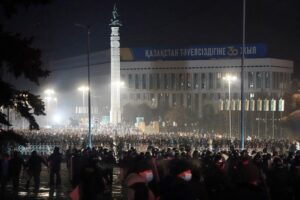 Questions remain for Kazakhstan after its president invited Russian soldiers to help deal with domestic unrest. (Photo from AP)

After inviting Russian soldiers into the country to resolve domestic instability, some have expressed concern with the Kazakh government’s political dependence and ties to its neighbor. The United States, the European Union, and others voiced worry regarding the potential prospect of destabilization and further Kremlin involvement in the internal affairs of nearby countries – particularly due to the situation taking place in Ukraine as well. As a result of the unrest in Kazakhstan, hundreds have been killed and thousands more detained. What had begun as protests against rising fuel prices turned into anger over government corruption and economic stagnation, with observers lamenting the Kazakh government’s attempts to blame the unrest on outside forces rather than domestic displeasure with a repressive regime. As part of its response, the government severed internet access and mobile networks in the country in order to limit communication among civilians and protesters. President Tokayev’s declaration of a state of emergency also included a shoot-to-kill order for police and security forces, which United States Secretary of State Antony Blinken and other prominent officials spoke out against and relayed alarm with. 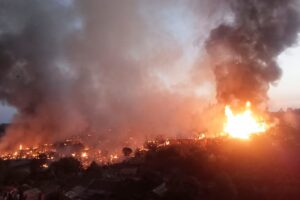 Thousands have been left without shelter after the fire burned through parts of the refugee camp. (Photo from Reuters)

A recent fire in a Bangladesh Rohingya refugee camp erupted and spread through the site, destroying approximately 1,200 homes and leaving more than 5,000 refugees and survivors of genocide without shelter. The conflagration lasted for about two hours and the cause has not been determined. The refugee camp is one of many in Bangladesh that Rohingya refugees, mostly from Myanmar, have been forced to call home. Fires like this are not uncommon there; refugees living in the camp have stated that they tend to occur regularly and that the lack of accessible water nearby often makes extinguishing them difficult. The camp is in an area of Bangladesh where more than 1 million Rohingya refugees have been living since 2017, with the largest camp holding nearly 700,000 people. Observers have expressed concern as this is the second fire in a week; the first destroyed a medical facility and COVID-19 treatment center in the camp. Additionally, in March of last year, another fire also consumed 10,000 shacks in a Rohingya refugee camp, the largest such camp in the world, resulting in the death of over a dozen people and the displacement of a further close to 50,000.