Welcome to our NIF Newsletter. In this week’s headlines: Sudan’s civilian Prime Minister Abdalla Hamdok resigns amid the military coup’s continued crackdown against pro-democracy protesters, the European Union calls for an international arms embargo on Myanmar’s military government following their recent massacre of civilians and humanitarian workers, and major unrest breaks out in Kazakhstan prompting the sacking of the country’s government and the declaration of a state of emergency.

Today, we also acknowledge the 1-year anniversary of the January 6th attack on the United States Capitol. One year has passed since a mob of pro-Trump rioters and insurrectionists violently stormed the Capitol in what amounted to the gravest attack on our country’s legislative building since the War of 1812. The rioters overran U.S. Capitol police, forcing members of Congress and then-Vice President Pence to temporarily halt the counting of electoral votes and take shelter throughout the building in a disgraceful attempt to overturn a free and fair election. The violent insurrection of 1/6/2021 resulted in the deaths of multiple police officers and left another 140 injured. The course of events that transpired on that day and the destruction inflicted on the Capitol marked a regrettable chapter in the history of American democracy. 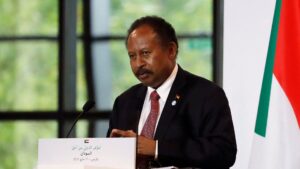 The resignation of Sudan’s civilian Prime Minister Abdalla Hamdok has added further political uncertainty in the country. Large numbers of pro-democracy protesters have been demanding a departure of the military from control of the government since their seizure of power via an October 2021 coup and the genuine establishment of a democratic civilian government. The demonstrators have endured violent reprisals from the military and security forces, with at least 57 killed and hundreds more injured. The gains made in the country following the ousting of former despot Omar al-Bashir in 2019 have been jeopardized as the military coup has impeded the democratic transition process, and the Sudanese people are fighting against a return to an authoritarian government. Despite the violence of the military response to anti-coup demonstrations, greater numbers of protesters have stepped into the streets of Khartoum and other cities in preceding weeks. The fear for many observers now is that with the resignation of Hamdok, the last vestige of civilian rule, the military may feel even more unrestrained in its attempts to suppress pro-democracy protests. 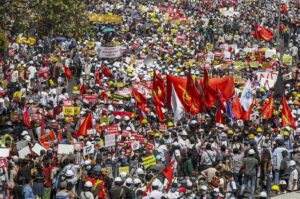 The military junta in Myanmar has engaged in a brutal and violent crackdown since seizing power. (Photo from AP)

Over the preceding week, the European Union (EU) has called for an international arms embargo against the military junta in Myanmar, following their recent massacre of civilians and humanitarian workers. The disturbing incident took place on Christmas Eve in which at least 35 people were killed – including multiple children and humanitarian workers from the aid group Save the Children. Rights activists and spokespeople from other such organizations have expressed that unfortunately, this massacre is not an isolated occurrence. On the contrary, it has been common for the military to shoot unarmed civilians, take part in forcible disappearances, burn residential homes to the ground, and engage in intimidating acts of violence against citizens. In totality, since the Myanmar military junta overthrew the country’s civilian government back in February of 2021, it has killed over 1,300 people and arbitrarily imprisoned an additional 11,000 or more. Victims of the heinous violence have included anti-coup and pro-democracy protesters, bystanders, humanitarian aid workers, journalists, political opponents, and others. In response, the EU and other Western nations have imposed targeted sanctions on junta figures and halted financial assistance to the Myanmar government, and now outrage and calls to do more have grown further in light of some of the latest developments. 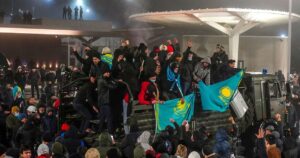 Dozens of people have been killed and thousands arrested during mass protests in Kazakhstan. (Photo from Getty Images)

Public demonstrations in Kazakhstan that began as protests against the removal of state subsidies on fuel have escalated into violent riots and uprisings against the incumbent government. The unrest stems from a sentiment among some of the country’s citizenry that while Kazakhstan is a resource rich country, the incredibly vast petroleum fields, mineral, and metal deposits that have made a segment of the Kazakh population wealthy have been prevented from transferring equitable benefits to the majority of the population. When the government lifted its subsidies on liquified petroleum gas (LPG), as part of President Tokayev’s economic reforms, prices for the LPG nearly doubled almost immediately. Tokayev had also promised political reforms to the country, which had not yet materialized. The shift in demonstrations from protesting economic conditions to an uprising with loud political tones that are demanding further reforms has prompted the sacking of the country’s government and the declaration of a state of emergency, with many observers concerned with the worrying levels of violence taking place.