Welcome to our NIF Newsletter. As we approach 2022, we hope that everyone has a safe and wonderful New Year! In this week’s headlines: anti-apartheid and global social justice advocate Desmond Tutu passes away at the age of 90, and a Saudi-Emirati air bombardment of Sanaa targets civilian infrastructure and exacerbates what is already one of the world’s worst humanitarian crises in Yemen. 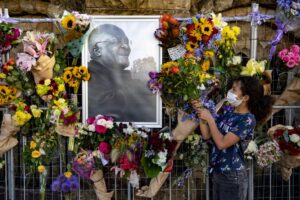 Archbishop Desmond Tutu garnered widespread admiration for speaking out against oppression and injustices around the world. (Photo from AP)

An exemplar of morality and a great advocate for the oppressed, South African Archbishop and Nobel Peace Prize laureate Desmond Tutu passed away earlier this week at the age of 90. Archbishop Tutu was a revered figure for his myriad of human rights and social justice activism. In addition to being awarded the Nobel Peace Prize in 1984 for his efforts to unite South Africans and peacefully put an end to the immoral system of apartheid in the country, Tutu spoke out against and worked to bring attention to other injustices around the world including Israel’s mistreatment of Palestinians. He was a critic of Israel’s unlawful and longstanding occupation of Palestinian territory, and drew parallels between the injustices perpetrated by the apartheid system in South Africa and the illegal Israeli occupation. Throughout the course of his remarkable life, Archbishop Tutu evoked particular admiration for his steadfast principles and integrity in fighting for equality, justice, and tolerance on a variety of issues.

Bombing of Civilian Targets in Yemen 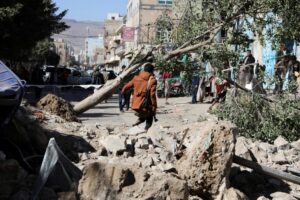 Airstrikes in Sanaa have resulted in the loss of civilian life and damaged residential areas and infrastructure. (Photo from Reuters)

A recent Saudi-Emirati air assault on Sanaa has targeted civilian infrastructure and exacerbated what is already one of the world’s worst humanitarian crises in Yemen. The air bombardment was found to have bombed and damaged residential homes, a hospital, a maternity ward, a prison, and other noncombatant infrastructure. Attacks against civilian infrastructure by the Saudi-led coalition have unfortunately been common occurrences and have drawn widespread condemnation; during the course of the war, their airstrikes have targeted schools, hospitals, markets, and agricultural and water infrastructure. Environmental fallout from the war efforts have included the destruction of ecosystems, the production of mass pollution, and toxic dust, soil, and water contamination. This has led to persistent and worsening impoverishment and disease in Yemen, contributing to the forced displacement of 4 million people. With the Saudi-led coalition causing significant damage to Yemen’s civilian infrastructure and ecosystems, 5 million Yemenis are suffering from famine and disease, while more than 20 million have been forced to rely on foreign aid for their survival.