Welcome to our NIF Newsletter. We hope everyone has a wonderful Christmas! In this week’s headlines: U.S. lawmakers urge the Biden administration to sanction four cyber surveillance firms for enabling human rights abuses, hundreds of thousands of Sudanese citizens march to the presidential palace in protest against the October military coup, rights groups justifiably criticize the jailing of prominent Egyptian activist Alaa Abdel Fattah, and an emergency conference of the Organization of Islamic Cooperation and its international partners agrees to set up a humanitarian trust fund to help address the ongoing crisis in Afghanistan. 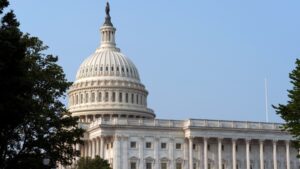 Lawmakers have criticized technology firms like NSO Group for selling their spyware to repressive governments. (Photo from AP)

Reports of spyware being sold to authoritarian governments by some cyber surveillance firms in the private sector and being used as a tool to violate human rights have been surfacing in recent months. Now, lawmakers in the United States are calling on the Biden administration to sanction four such companies, including the scandal-plagued Israeli firm NSO Group. More than a dozen Congressional Democrats, led by House Intelligence Chairman Adam Schiff of California and Senator Ron Wyden of Oregon, submitted a letter urging the U.S. Treasury Department to take punitive steps against NSO Group and three others. The lawmakers highlighted how the companies’ reprehensible behavior has empowered and enabled the repressive regimes in their efforts to silence, torture, and even murder rights activists and journalists. In one of the most heinous and high-profile instances, NSO Group’s widely criticized Pegasus software was used to spy on Saudi journalist and dissident Jamal Khashoggi before he was killed at the Kingdom’s consulate in Istanbul back in October of 2018. On top of the NSO Group, the three additional entities spotlighted for enabling human rights abuses are Emirati cybersecurity firm DarkMatter and the two European companies Nexa Technologies and Trovicor. 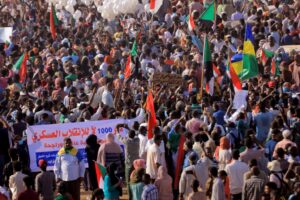 Pro-democracy demonstrations in Sudan have been growing in response to the recent military coup. (Photo from Reuters)

The latest round of pro-democracy and anti-coup protests in Sudan have drawn hundreds of thousands of citizens on a march toward the presidential palace. Recent demonstrations have also taken place in conjunction with the third anniversary of the 2018 civilian movement and uprising, which led to the ousting of former despot Omar al-Bashir after three decades of autocratic rule. In the Sudanese capital city of Khartoum, those protesting against the October military coup that eliminated the interim government and disrupted the democratic transition process in the country have been subjected to violent attacks by security forces. Medical personnel on the scene have noted the use of live ammunition, stun grenades, rubber bullets, and tear gas, all deployed in an attempt to brutally crack down on large-scale protests. Since the coup in late October, dozens of people have been killed by security forces. Despite the ruthless suppression efforts, the organizers of the pro-democracy gatherings have called for sit-ins, strikes, and additional demonstrations in the coming days. They have emphasized that Sudanese citizens must continue their resistance to the military coup until power is handed back to a civilian government.

Jailing of Activist in Egypt 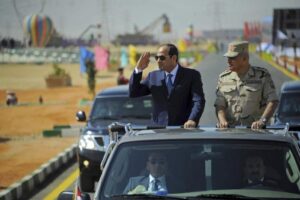 The el-Sisi regime in Egypt has been routinely condemned for its track record of major human rights abuses. (Photo from AP)

This week, Egyptian officials have elicited condemnation from rights groups for sentencing prominent activist Alaa Abdel Fattah to five years in prison on dubious and politically-motivated charges. The unjust convictions against Abdel Fattah and several other well-known advocates, who had already been detained for multiple years, are just the latest in a longstanding pattern of repressive behavior and human rights violations by the el-Sisi regime. Under the current government, reputable international rights organizations have detailed how tens of thousands of Egyptian citizens have been arbitrarily imprisoned in a massive crackdown aimed at stifling dissent, suffocating political activism, and restricting civil liberties and freedoms. Amnesty International labeled the recent verdict as a “travesty of justice,” while Human Rights Watch highlighted that the trial of Abdel Fattah and others had been hindered by numerous due and fair process violations. Ultimately, critics point to how the problematic charges against political prisoners in Egypt are used to try and protect the existing military dictatorship and power structure controlling the country. 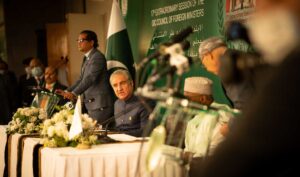 This past week’s emergency conference established a plan to help tackle the humanitarian crisis in Afghanistan. (Photo from NPR)

Concerning levels of food insecurity affecting more than 20 million people in Afghanistan, approximately half of the country’s total population, have propelled member states of the Organization of Islamic Cooperation (OIC) and their global partners to initiate a substantial humanitarian aid effort. There have been no denials from countries or relief organizations regarding the severity of the humanitarian crisis there, but recent action has been absent partly because of a distrust for the Taliban, which reseized control of the nation back in August. The OIC has announced that it will establish a trust fund, operating under the authority of the Islamic Development Bank, in order to help alleviate the catastrophe and prevent a total economic collapse in the country. Civilian casualties there were at a record level this year with many negatively impacted and being subjected to violence and forced labor. An estimated nearly 700,000 Afghans have been displaced from their homes in 2021 alone, adding to the already 3 million internally displaced prior to the start of this year. The OIC humanitarian trust fund will include a food security program, as well as a special envoy for Afghanistan.