Welcome to our NIF Newsletter. In this week’s headlines: the publication of a final list of presidential candidates is delayed in Libya and casts doubt over the planned elections scheduled for December 24th, envoys from the Group of Seven (G7) nations and the European Union urge for a timeline to return to functioning democratic institutions in Tunisia, U.S. Secretary of State Antony Blinken embarks on his first multi-stop trip to Southeast Asia as America’s top diplomat, and the United States imposes a wave of human rights-related sanctions on China, Myanmar, and others. 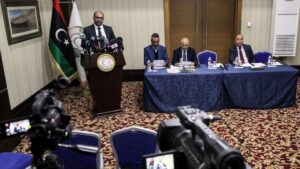 Calls for an election delay are mounting in the face of these major challenges. (Photo from AFP)

The likelihood of planned elections in Libya taking place next week on December 24th faces serious uncertainty, as the country’s election commission has delayed the publication of a final list of candidates. Calls for an election postponement have been mounting in recent weeks due to significant challenges, and the candidate list delay is just the latest development casting doubt on the scheduled vote. Observers are concerned that two scenarios – either holding the election as planned with the existing major contentions or postponing it to a later date – could have a destabilizing effect on the reconciliation process in Libya and ignite conflict. The electoral commission tasked with overseeing the slated vote ultimately announced that it could not approve the list of candidates because of legal disputes. Approximately 100 people have applied to run for the presidency but the commission, fearing that an election conducted with disputed candidates would jeopardize public recognition of the results, has been unable to finalize the ballot. In one such controversial case, court decisions have overturned the election commission’s decision to block the candidacy of Saif al-Islam Gaddafi – son of the former dictator who has been convicted of egregious war crimes. Additionally, the potential approval of both renegade warlord Khalifa Haftar and Libya’s interim prime minister Abdulhamid al-Dbeibah have also presented substantial challenges.

Call for Return to Democracy in Tunisia 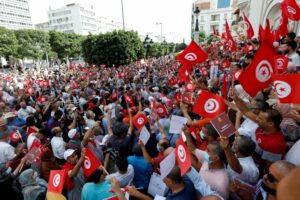 The country’s citizens continue to voice their opposition to Saied’s power grab and suspension of parliament. (Photo from Reuters)

Addressing the ongoing crisis in Tunisia, diplomatic leaders from the Group of Seven (G7) nations and the European Union (EU) released a joint statement during this past week urging Tunisian President Kais Saied to establish a clear timeline that will pave the way for the country’s return to functioning democratic institutions which would be allowed significant input in decisions affecting political and civil society. Back on July 25th of this year, Saied drew criticism for a string of actions which included suspending the elected parliament, dismissing the prime minister and cabinet, and claiming far-reaching powers for himself under the guise of addressing the nation’s economic and political woes. More than several months since this took place, Saied continues to face large-scale opposition for his behavior with thousands of Tunisians engaging in widespread pro-democracy demonstrations demanding a reinstatement of democratic institutions. Now, he has elicited further ire for his recent decision to extend the months-long suspension of parliament, with Saied announcing that this would be done until new elections planned for December of next year with a constitutional referendum also set for July of 2022. In the country that was the birthplace of the 2011 Arab Spring, Saied’s actions have justifiably raised fears of a backslide toward autocracy.

One of the aims of Secretary of State Blinken’s trip is to bolster U.S. economic engagement in the region. (Photo from Reuters)

This week, U.S. Secretary of State Antony Blinken took his first official diplomatic trip to Southeast Asia, which included stops in Indonesia and Malaysia. The visit to the region comes at a time of increasing American-Chinese competition and rising tensions. Blinken has been critical of China’s aggression in the South China Sea, expressing that its behavior there is a growing concern and a threat to more than $3 trillion in annual trade which flows through the area. The overall trip by Secretary of State Blinken is part of the Biden administration’s wider Indo-Pacific strategy that is aimed at expanding economic and security cooperation with Southeast Asian nations, and strengthening ties between the United States and its major allies there such as Indonesia, Australia, India, and Japan. Analysts have also noted its geopolitical significance as it pertains to the United States making attempts to counter China’s influence in the region. When a reporter traveling with the State Department tested positive for COVID-19 in Malaysia, the remainder of Blinken’s tour through Southeast Asia was unfortunately cut short and prompted him to return to the United States sooner than originally planned. 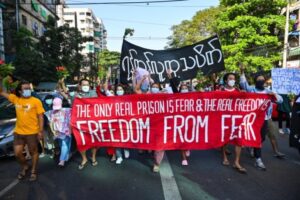 The United States has issued sanctions against several oppressive governments for their human rights abuses. (Photo from AFP)

The United States Imposes a Wave of Human Rights-Related Sanctions on China, Myanmar, and Others

Dozens of individuals and entities in China, Myanmar, and North Korea, among others, have been targeted in a major wave of human rights-related sanctions. The United States imposed the punitive measures in conjunction with the commemoration of Human Rights Day, and U.S. officials expressed that the sanctions are intended to serve as a message to the world that democracies will act against countries who abuse government power to oppress and harm their own citizens. The timing of the actions was also coordinated to coincide with U.S. President Biden’s virtual Summit for Democracy – a gathering aimed at advancing respect for human rights, combating corruption, and defending against authoritarianism. During the course of the two-day meeting, more than 100 world leaders, including President Biden, made commitments to challenge the rise of autocracy in the world and promote the protection of human rights. China in particular has come under increased criticism for its array of human rights violations, such as the mistreatment of Uyghurs in Xinjiang and repressive and intrusive policies in Hong Kong. The U.S. government, rights groups, independent tribunals, and others have all tried to maintain focus on the crimes against humanity taking place in the countries hit with this recent slew of sanctions.