Welcome to our NIF Newsletter. This week, we recap Wednesday’s NIF Zoom event regarding the prospects of reviving the Iran Nuclear Deal in the face of negotiations resuming on the issue. Meanwhile, in our news headlines: Saudi Crown Prince Mohammed bin Salman meets with Qatari Emir Sheikh Tamim bin Hamad Al Thani in Doha after Turkish President Recep Tayyip Erdogan engages in bilateral talks with Qatari officials as well, and U.S. intelligence officials warn that Russia may be planning a military offensive against Ukraine in the coming months.

This week, the National Interest Foundation (NIF) hosted a Zoom event to discuss the resumption of nuclear negotiations with Iran and the prospects for reviving the Joint Comprehensive Plan of Action (JCPOA). The panel of issue experts included Trita Parsi, Co-Founder and Executive Vice President of the Quincy Institute for Responsible Statecraft; Doug Bandow, Senior Fellow at the Cato Institute; and Negar Mortazavi, Iranian-American journalist and political analyst. The discussion was moderated by Bruce Fein, the Founder and Principal Shareholder of Fein & DelValle PLLC. The panelists discussed the dynamics of domestic U.S. politics that are affecting nuclear talks, the byproducts of sanctions, and Iran’s motivations and leverage in negotiations.

Ms. Negar Mortazavi started the panel discussion with very interesting insights into some Iranian expectations. After the 2020 U.S. elections, there was hope in Iran that the U.S. would return to the JCPOA – something which Iran is still a member of. President Biden’s criticism of President Trump for withdrawing the U.S. from the agreement and candidate Biden’s campaign promise to rejoin the deal created an expectation in Iran that returning to the JCPOA would be a foreign policy priority for the new administration. Iran’s escalation of its nuclear program and capabilities have been a method of leverage to pressure the U.S. to return to the deal. Ms. Mortazavi detailed how one of the difficulties to negotiations, the inability of U.S. and Iranian negotiators to meet face-to-face, is entirely within the power of the Biden administration to correct. A symbolic return to membership in the JCPOA through an executive order would allow the United States to negotiate directly with Iran, rather than through the current method of intermediaries shuttling messages. The ability to determine accurate levels of domestic support for the nuclear program in Iran is difficult because political polling there does not happen independently from the regime. However, it is understood that there is support there for a civilian nuclear energy program.

Mr. Trita Parsi’s observations were thought-provoking and highlighted an impediment to negotiations that span a larger issue affecting U.S. foreign policy. A favorable answer to the question ‘will Iran surrender its key leverage if a potentially different president in 2024 would break an agreement made now’ is imperiled because of normalization of the idea that one presidential administration may not honor the agreements of the previous. The problem of political fluidity in the U.S. has undermined these negotiations and potential future ones. This is dangerous because it spoils American trust and credibility, the value and potency of the promises it makes, and the leverage it has in negotiations. Mr. Parsi also warned of the danger from the inexperience of Iran’s negotiators. The Iranian negotiators and government officials are new. It is therefore troublingly uncertain if they have the capacity and skill to calibrate calculated escalations without risking the full collapse of the negotiations.

Mr. Doug Bandow highlighted a critical issue of sanctions which intersects with the credibility of U.S. promises from one administration to another. Many companies are reluctant to engage with Iran because its investments there could become losses if a sanctions regime by a new administration force them to leave. Despite sanctions, Iran has not altered its policy and still has leverage in negotiations. Sanctions can have impacts but sometimes in unintended ways; sanctions evasion is its own industry and many people have made a lot of money from it. These individuals are relied upon by the state, and the effect is that it can empower some of the most corrupt people in a country. Circumventing sanctions then becomes the state policy. It is important to remember that sanctions did not prevent North Korea from developing nuclear weapons, and sanctions enforcement will be much more difficult as digital currency becomes more widespread. 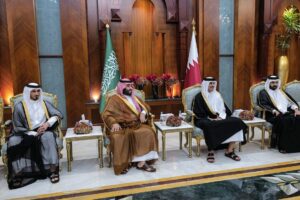 The Saudi Crown Prince has embarked on a Gulf tour this week, which includes a stop in Qatar. (Photo from Anadolu Agency)

Saudi Crown Prince Mohammed bin Salman (MBS) met with Qatari Emir Sheikh Tamim bin Hamad Al Thani in Doha, following bilateral talks between Turkish President Recep Tayyip Erdogan and Qatari officials earlier this week as well. MBS’ stop in Qatar as a part of his larger Gulf tour is a notable regional diplomatic development, as it marks his first visit to the country since the four-year Saudi-led blockade of Qatar – a crisis which the parties involved took steps toward ending back in January with the signing of a reconciliation deal. Analysts point out that the trip signals a further willingness to continue the repairing of relations between the Gulf neighbors. During the course of the years-long diplomatic rift with Saudi Arabia and others including Bahrain and the United Arab Emirates, Qatar strengthened its ties with Turkey. The two nations’ bilateral talks this week resulted in multiple investment agreements, but did not include a meeting between Erdogan, the Emir of Qatar, and the Saudi Crown Prince. Turkish President Erdogan had sought to meet with MBS while in Qatar as well, however this did not ultimately come to fruition, with Turkish and Saudi officials saying instead that a future gathering between the two could be scheduled soon. Erdogan and MBS have not met since prominent Saudi dissident and journalist Jamal Khashoggi was murdered inside the Kingdom’s consulate in Istanbul – with MBS having been implicated for ordering the heinous killing. 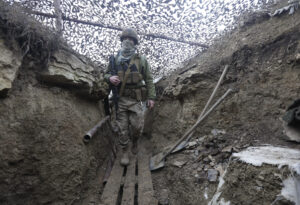 The U.S. and its European allies have reaffirmed their support for Ukraine’s sovereignty and territorial integrity. (Photo from AP)

U.S. Intelligence Officials Warn That Russia May Be Planning a Military Offensive Against Ukraine in the Coming Months

Findings from the U.S. intelligence community have warned that Russia’s deployment of soldiers and weapons to areas along its border with Ukraine are indicative of a potential military offensive in the coming months. A National Security Council spokesperson in the Biden administration has stated that intelligence reports detailing Russia’s plans involve 100 battalion tactical groups with 175,000 personnel and include armor, artillery, and equipment. Last month, Russia deployed its elite armored tank battalions to its border along Ukraine, and analysts have expressed concern with the risk that Russian aggression would pose to the future of a sovereign Ukraine and the greater stability of Eastern Europe. Based on the findings, some experts have contended that Moscow is likely evaluating how the United States and its European allies would respond to a military provocation and is testing the Biden administration’s strategic pivot which includes a greater focus on Russia. This week, U.S. President Biden and Russian President Putin held a virtual meeting where they discussed, among other subjects, Russia’s behavior at the Ukrainian border.