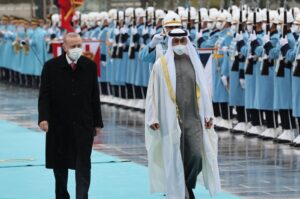 Turkey’s president and the UAE’s crown prince met this week in an effort to improve bilateral relations and work on economic collaboration. (Photo from AFP)

This week, United Arab Emirates Crown Prince Mohammed bin Zayed (MBZ) traveled to Turkey for diplomatic talks with Turkish President Recep Tayyip Erdogan. The meeting marks a significant gathering for the leaders of the two nations, as bilateral ties between them have been strained for years over varying perspectives on key issues across the region. Subjects such as Libya, Syria, and the Qatari diplomatic crisis have seen Turkey and the United Arab Emirates at odds, with impartial analysts lamenting the latter’s aggressive and destructive foreign policy which has included support for renegade warlord Khalifa Haftar in Libya and the devastating war in Yemen, among other things. Now, the two countries have announced their desire for a “new era” of improved relations. During the talks, Erdogan and MBZ discussed regional issues of security, economic policies and dealings, and steps that can be taken to expand cooperation.

Desire for Democracy in Tunisia 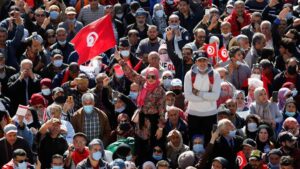 U.S. Secretary of State Urges the Tunisian President to Implement Reforms in Response to the Country’s Citizens’ Desire for Democratic Progress

U.S. Secretary of State Antony Blinken has urged Tunisian President Kais Saied to enact reforms in order to heed to the country’s citizens’ desire for continued democratic progress. Tunisia has been embroiled in an ongoing political crisis since Saied strengthened his grip on power several months ago, drawing widespread criticism both at home and abroad for suspending parliament and dismissing his cabinet. Thousands of Tunisians continue to engage in large-scale pro-democracy demonstrations demanding that Saied reinstate the assembly, while many nations, international institutions, and advocacy groups have also called for a return to the democratic process and normal constitutional order. A crippling economic downturn and political upheaval have observers worried about further destabilizing conditions across the region, with Secretary of State Blinken and others paying particular special attention to the Tunisian president’s power grab due to the country being one of the main democratic successes to emerge in the aftermath of the 2011 Arab Spring uprisings. 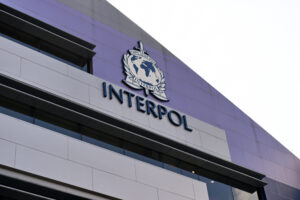 The organization is holding elections for various high-level positions this week. (Photo from Getty Images)

Human rights groups and activists have sounded the alarm over potential authoritarian influence on the International Criminal Police Organization (Interpol) elections, with the global entity holding a vote this week to select its next president and some executive committee members. A couple of the candidate nominations in particular have elicited concern – Ahmed Naser Al-Raisi, inspector general of the United Arab Emirates’ interior ministry who is running for Interpol president; and Hu Binchen, an official at China’s ministry of public security who is seeking a vacant spot on Interpol’s executive committee. The fear among rights activists is that Interpol, which focuses on issues such as crimes against humanity, political corruption, and intellectual property infringement, could have its work in these important areas hindered by authoritarian governments if the international organization’s top-level positions are filled by candidates like Al-Raisi or Hu. Due to this, many nations have also expressed opposition to the controversial nominations. In the United States, congressional members signed a letter to Interpol urging the international organization to resist them in order to ensure that it remains dedicated to holding human rights violators accountable to the global community, and does not become a tool used by authoritarian regimes to promote oppression.