Welcome to our NIF Newsletter. In this week’s headlines: large-scale protests take place in Sudan opposing the recent military coup and calling for a return to democracy, rights advocates urge Libya’s elections commission to reject the potential candidacy of former dictator Gaddafi’s son Saif al-Islam and renegade warlord Khalifa Haftar due to the serious war crimes charges against both of them, a report by human rights group B’Tselem finds that Israel has been using settler violence as a tool to seize Palestinian land in the illegally-occupied West Bank, and the European Union approves fresh sanctions on Belarus amid its growing border crisis with Poland. 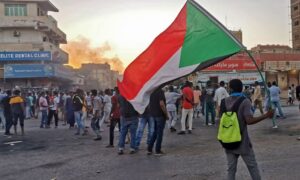 Sudanese pro-democracy protesters have taken to the streets despite violent suppression from security forces. (Photo from Getty Images)

Widespread protests in Sudan calling for a return to democracy and opposing the recent military coup which eliminated the interim government shortly before elections were supposed to take place have gained momentum. Despite security forces’ violent attempts to suppress the demonstrations, killing at least 15 people today and wounding dozens of others, the protests continue with thousands of Sudanese citizens adamant on reinstating the democratic transition process in the country. A considerable level of foreign interference had enabled the circumstances which led to the military coup, with analysts particularly highlighting the destabilizing role of external anti-democratic forces such as Saudi Arabia, the United Arab Emirates, and others, who are known to help prop up fellow authoritarian regimes in the region behind the scenes. On the other hand, activists and proponents of the efforts to build longstanding democracy in the region have called for the restoration of the transitional government, while human rights groups are trying to draw attention to and halt the military coup’s brutal repression of protesters. 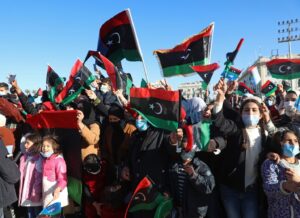 Rights advocates have urged Libya’s elections commission to reject the potential candidacies of former dictator Gaddafi’s son Saif al-Islam and renegade warlord Khalifa Haftar, on the grounds of their history of atrocities and the egregious war crimes charges against both of them. Many are calling on the commission to deny the election bids of those who have used excessive force against the Libyan people or are the target of arrest warrants from the country’s courts and intergovernmental organizations like the International Criminal Court (ICC). Saif al-Islam Gaddafi is wanted on war crimes charges by the ICC and Khalifa Haftar has committed crimes against humanity in his role as head of the Libyan National Army (LNA), whose forces engaged in an offensive on the capital city of Tripoli in an attempt to gain control of the nation from the internationally-recognized Government of National Accord (GNA). Libyans have taken to the streets to protest against the candidacies of Gaddafi and Haftar, while civil society groups and activists have issued statements expressing their strong opposition to the two controversial figures’ efforts to participate in the planned upcoming election next month. Gaddafi and Haftar have analysts justifiably worried about Libya’s delicate democracy backsliding due to the pair’s long-documented history of human rights abuses and their desired eye towards authoritarian rule. 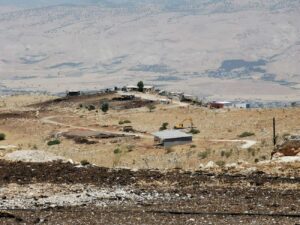 The human rights group detailed the ways in which Israeli authorities legitimize the settler violence. (Photo from B’Tselem)

Human rights group B’Tselem has issued a report detailing the ways in which Israel uses settler violence as a major strategic tool to seize Palestinian land in the illegally-occupied West Bank. The investigation delved into the settlers’ takeover of more than 10 square miles of farm and pasture land during the past five years, and shed light on a consistent pattern of behavior whereby they engaged in violence against Palestinians. B’Tselem found that Israeli authorities did not prevent the attacks, and on the contrary, even aided and abetted them in many instances. The settlers who provocatively instigate violence face no repercussions or accountability for their inflammatory actions, as the Israeli state whitewashes the few cases that it is called upon to address. Ultimately, B’Tselem rightly pointed out that the settler violence is in fact state-sponsored, since the behavior occurs with the permission and assistance of Israeli authorities who legitimize it as a means to try and carry out their unlawful land grabs from Palestinians. 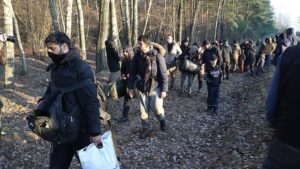 The sanctions against the Lukashenko regime in Belarus have been imposed for their role in fomenting the humanitarian crisis. (Photo from Getty Images)

The ongoing humanitarian crisis on the Belarusian-Polish border has worried rights groups and security experts, with the European Union (EU) approving fresh sanctions against the Lukashenko regime in Belarus for its role in fomenting it. Belarusian dictator Alexander Lukashenko is accused of weaponizing the crisis for political purposes, pushing large numbers of asylum seekers from countries such as Iraq and Afghanistan towards neighboring nations like Poland. Analysts contend that Lukashenko’s actions are retaliation for the punitive EU measures that were previously placed upon Belarusian officials after his illegitimate re-election last year and the subsequent intimidation and violent repression of peaceful protesters, opposition figures, and journalists which has been taking place since then. Several countries and airlines have curbed their flights to Belarus in an effort to try and alleviate the circumstances. Poland has formed a rigid border, thus keeping the migrants in limbo during harsh and brutal winter conditions, and observers lament the fact that vulnerable refugees have ultimately been caught in the middle of the escalating tensions between Belarus and the EU.