Welcome to our NIF Newsletter. In this week’s headlines: Israel receives widespread condemnation for designating 6 Palestinian human rights groups as terrorist organizations, Sudan’s military seizes power in a coup after dissolving the country’s transitional government and detaining senior officials, Israel announces plans to build 1,300 new settlement homes in the illegally-occupied West Bank, and rights group Amnesty International declares that it will close its Hong Kong offices by the end of the year due to the growing environment of repression stemming from the Beijing-imposed national security law. 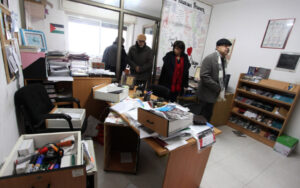 The unjust designations were broadly condemned by human rights watchdogs, the United States, the United Nations, and others. (Photo from Flash90)

During the past week, Israel sparked global outrage when it designated 6 Palestinian human rights groups as terrorist organizations. The move was widely condemned by prominent rights watchdogs, international institutions such as the United Nations, and foreign governments including the United States, with critics highlighting that the decision was aimed at suppressing documentation and scrutiny against the array of Israeli human rights abuses in illegally-occupied territory. Human Rights Watch and Amnesty International labelled the designations as “appalling and unjust” and expressed that they presented a test to the global community’s resolve to protect human rights defenders in the face of systematic assault against them, while the U.S. State Department was irked by the Israeli announcement as well. One of the major aspects that observers lament is the blatant attempt to hinder Palestinian civil society and the important humanitarian work done by not only these groups, but other such organizations too. Rights groups and entities that are not directly impacted by the blacklist designation understand that it is clearly intended to impede advocacy efforts as a whole, and as such it is not surprising that the denouncement of the move has been so swift and overwhelming across the board. 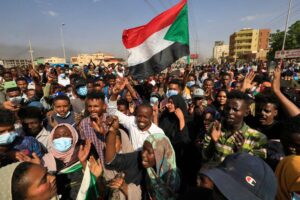 Large-scale protests have emerged in opposition to the military coup and political detentions. (Photo from Getty Images)

Sudan has descended into a political crisis, with the military under General Abdel Fattah al-Burhan seizing power in a coup after dissolving the country’s transitional government and detaining senior officials. The move has thrown the prospects of stability in doubt, as Sudan had been engaged in a democratic transition process while working to try and strengthen its fragile state of affairs. Analysts have bemoaned the destabilizing role of external anti-democratic forces such as Saudi Arabia, the United Arab Emirates, and Egypt in enabling the circumstances which have transpired due to the longstanding pattern of these entities propping up fellow authoritarian regimes in the region. The military coup has received international condemnation from the African Union, the United Nations, and the European Union, among others, in addition to major pro-democracy advocacy groups. Internally within Sudan as well, large-scale protests have emerged in opposition to the coup and political detentions, with demonstrators calling for the return of civilian rule.

Israel’s expansion of its illegal settlements is viewed as a major obstacle to the peace process. (Photo from AFP)

Israel announced this week that it plans on building 1,300 new settlement homes on Palestinian land in the illegally-occupied West Bank. The global community views Israeli settlements as a flagrant violation of international law, and impartial analysts often rightfully point out how it is a massive hindrance to any realistic prospects of progress regarding the Israeli-Palestinian peace process. The new housing units are in addition to the more than 2,000 residences that were authorized for West Bank settlers several months ago. Israel’s inflammatory actions, both this and their Palestinian human rights organization terror designations, have come under particular large-scale criticism in recent days. The United States, the European Union, the United Nations, and rights advocacy groups all expressed grave concern and strong disapproval with the plan for more unlawful settlements, as social justice activists call for increased pressure to halt the reprehensible behavior. 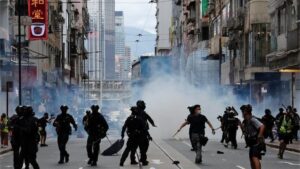 Authorities have engaged in a clampdown on freedoms in Hong Kong since the implementation of last year’s controversial security law. (Photo from Reuters)

Rights group Amnesty International has declared that it will close its Hong Kong offices by the end of the year due to the growing environment of repression stemming from the Beijing-imposed national security law. In the aftermath of the controversial legislation’s implementation, Hong Kong has been subjected to increased levels of repression and a significant crackdown on civic freedoms – which has hampered the work of advocacy organizations like Amnesty International. As a result, the group has expressed that it is unable to operate safely or effectively in Hong Kong, prompting them to make the difficult decision to close their offices in the coming months. The intentionally broad and vague language regarding “criminal acts” outlined in the law has had a particularly destabilizing impact, and Amnesty International is just one of many rights organizations that have been negatively affected by it. Ultimately, uncertainty exists over what activities may lead to criminal charges and the evident pattern of detainments and prosecutions against perceived opponents has shown how the parameters of the law can be manipulated to target whomever authorities choose to.