Welcome to our NIF Newsletter. This week, we recap Wednesday’s NIF lunch discussion event regarding the living conditions of Palestinian citizens of Israel. Meanwhile, in our news headlines: human rights lawyers submit a case to British police accusing senior government officials in Saudi Arabia and the United Arab Emirates of complicity in Yemeni war crimes, the Association of Southeast Asian Nations (ASEAN) agrees to exclude Myanmar’s military junta leader from a key summit later this month, and Russia suspends its diplomatic mission to the North Atlantic Treaty Organization (NATO).

This week, the National Interest Foundation (NIF) hosted a lunch discussion event regarding the living conditions of Palestinian citizens of Israel and the documented mistreatment of Muslims and Christians alike by the Israeli government. The event featured guest speaker Jafar Farah, Founder and Director of the Mossawa Center – an advocacy group for Palestinian Arab citizens of Israel. Farah is the former Chair of the National Union of Arab Students and former President of the Committee for Arab Students at the University of Haifa. He also founded CEGAS, the Committee for Educational Guidance for Arab Students, and was involved in establishing several organizations including I’Lam and ACAP (Arab Center for Alternative Planning). The lunch discussion event was moderated by Khaled Saffuri, President of the National Interest Foundation.

In his remarks, Mr. Farah outlined some of the ways in which the Israeli government has engaged in an array of human rights abuses against Palestinians, both within Israel and in Palestinian territory. He highlighted the lack of rights afforded to Palestinian citizens in Israel as compared to their Israeli Jewish counterparts. Among other things, discrepancy in access to education, the prohibited use of certain roads, and the lack of ability to own property outright are a few concrete examples of how Israeli authorities discriminate against Palestinian citizens. Farah also discussed the fact that the rights of Palestinians are severely limited for both Muslims and Christians regardless of religious affiliation, as people sometimes overlook the significant minority of Palestinian Christians that exist as well. Ultimately, the Israeli government’s policies and practices towards Palestinians have resulted in a growing number of critics and observers labelling Israel as an apartheid state.

The need for additional cooperation on the subject within the United States was also delved into, with Mr. Farah stressing the importance of solving the inequality within Israel and calling for at least 20% of the $3.8 billion in funding the U.S. gives to Israel for military defense to go towards peace development and improving human services. Discussion over the merits of a two-state vs. one-state solution was also addressed, with Farah examining the main components of each stance. The event moderator, Mr. Saffuri, also pointed out how much of the younger generation – particularly in the United States – has adopted a progressive stance on the Israeli-Palestinian issue and grown more sympathetic to the struggle for equality, due in part to wider and easier access to factual information which has justifiably allowed Palestinian voices to be heard. Overall, the discussion regarding the institutional discrimination against Palestinians was productive and beneficial in helping to further understand the ongoing levels of inequality in Israel.

To watch the entire event on our YouTube page, including both the moderated discussion and Q&A session, please click here. 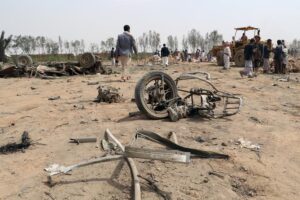 Saudi-led coalition airstrikes have had a devastating effect on Yemen’s civilian population. (Photo from Reuters)

A group of human rights lawyers from the United Kingdom-based organization Guernica 37 have filed a case against senior government figures in Saudi Arabia and the United Arab Emirates for their complicity in Yemeni war crimes. In the dossier, the activists cited the officials’ involvement in egregious atrocities committed during the course of the ongoing conflict in Yemen – which observers have consistently highlighted as the world’s worst and most dire humanitarian crisis. Impartial analysts point out that the calamitous degree of the crisis has been directly caused by the destructive Saudi and Emirati-led coalition airstrikes that have devastated Yemen’s civilian population and infrastructure. The foreign intervention’s actions have had an especially negative effect on children in Yemen, with the United Nations Children’s Fund (UNICEF) recently releasing new data outlining that at least 10,000 children have now been killed as a result of the crisis, while 80% are also in need of humanitarian assistance. These latest developments regarding Yemen emphasize how rights advocates are trying to maintain focus on the critical crisis there and ensure accountability for those who have played a major role in creating and exacerbating it. 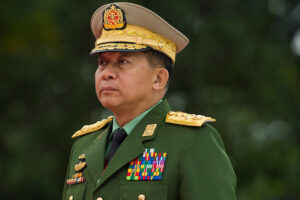 The move is a notable blow to the Myanmar junta’s attempts to garner international legitimacy. (Photo from Getty Images)

The Association of Southeast Asian Nations (ASEAN) has formed a consensus to exclude Myanmar military junta leader Min Aung Hlaing from an upcoming ASEAN summit later this month. Rights activists have praised the bloc for taking a strong stance against the repressive dictator and his regime, with some advocates highlighting the move as a major breakthrough for positive diplomacy and the array of anti-junta voices. Others have also pointed out the important effect it has on depriving the Myanmar military junta of its attempts to garner international legitimacy – something that it had been hoping to achieve in order to try and discourage internal resistance within the country. In the past, ASEAN has been criticized for seemingly not doing enough to pressure the junta, but this week’s firm action has been commended by impartial analysts as a noteworthy measure to punish the regime and harm its standing on the world diplomatic stage. 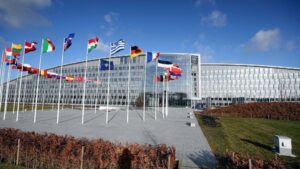 Relations between Russia and NATO have been increasingly strained in recent years. (Photo from Getty Images)

This week, Russia officially suspended its diplomatic mission to the North Atlantic Treaty Organization (NATO). The move, although not completely unexpected, is just the latest example of strained ties between the Kremlin and the West. Russia’s course of action this week comes after NATO expelled 8 Russian officials from its headquarters in Brussels earlier this month, with NATO citing its belief that the personnel were secretly working as Russian intelligence officers. The alliance bloc expressed that it would still hope to keep an open dialogue channel with Russia, despite the recent souring moves from both sides. It also made clear that Russian aggression, overseas interference in elections, and the Kremlin’s destructive actions in Ukraine and other places were major contributing factors to worsening NATO-Russian relations. While diplomatic cables still exist among individual nations within NATO and Russia, the planned removal of the mission signals just how far things have deteriorated between Moscow and the transatlantic security organization in particular.