Welcome to our NIF Newsletter. In this week’s headlines: armed violence breaks out in Beirut as tensions escalate over the port explosion probe, an investigation by Human Rights Watch (HRW) finds that Facebook wrongfully suppressed content regarding Israeli human rights violations against Palestinians, former Tunisian President Moncef Marzouki urges the country’s citizens to rally in defense of democracy in the face of Saied’s controversial recent power grab, and Group of Twenty (G20) leaders take part in a virtual summit to address the ongoing humanitarian crisis in Afghanistan.

Violence Breaks Out in Beirut 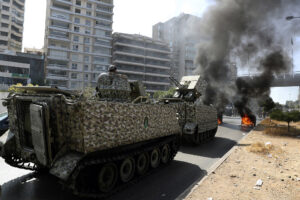 Armed clashes and heavy gunfire have erupted in the Lebanese capital city. (Photo from AP)

Today, deadly clashes and gunfire have erupted in the Lebanese capital city of Beirut, as tensions escalate over the ongoing port explosion probe. The violence comes after protests were organized by the Lebanese group Hezbollah and its allies against the lead judge investigating last year’s massive blast at the Port of Beirut. Witnesses claim that the problem started when demonstrators came under fire from gunmen belonging to the Lebanese Forces headed by Samir Geagea – who is supported financially and politically by Saudi Arabia and the United Arab Emirates – as analysts and regional experts have long lamented the destabilizing degree of foreign interference in Lebanon. The location of the outbreak of gunfire took place near the birthplace of the Lebanese Civil War in 1975, and has also therefore raised concern regarding the potential of further and prolonged violence. To date, 6 people have been killed with at least a further 30 more injured, as the Lebanese military has been deployed into the streets of Beirut to try and quell the situation. 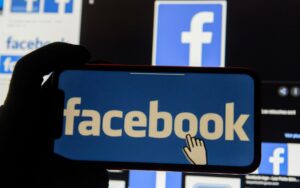 Human Rights Watch (HRW) has issued a report highlighting social media giant Facebook’s removal and censorship of content relating to Israeli human rights abuses against Palestinians, including violations such as airstrikes on civilian targets in Gaza which took place earlier this year during Israeli-Palestinian hostilities in May. The Israeli abuses also consisted of brutal suppression of peaceful demonstrators, assaults on places of worship, and efforts to forcibly expel Palestinians from their generational homes. Activists are particularly alarmed with Facebook’s behavior since the escalation in violence several months back prompted people to turn to social media as a means of documenting and raising awareness regarding the reprehensible Israeli actions. In this digital age, citizens all over the world often rely on widely-used platforms like Facebook, Twitter, and others to bring attention to important human rights and social justice concerns. While many strive to utilize Facebook and its other affiliated websites for fair and impartial evidence collection, the measures taken by the tech company display questionable manipulation of information in certain instances.

Defense of Democracy in Tunisia 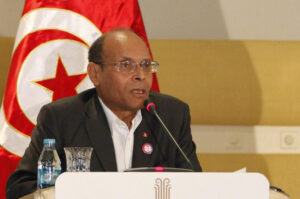 The former Tunisian president spoke out against Saied’s actions and called on the country’s citizens to resist. (Photo from Reuters)

During this past week, Former Tunisian President Moncef Marzouki called on the country’s citizens to rally in defense of democracy and protest against current President Kais Saied’s controversial recent power grab. Marzouki urged Tunisians to put aside any political affiliations and take part in the resistance efforts, highlighting the importance of upholding democratic ideals and principles which have been threatened as a result of Saied’s actions in the preceding months. He also suggested that the resignation of Tunisia’s president and parliament speaker could be a way out of the existing political crisis gripping the nation. Thousands of Tunisian advocates organized and engaged in large anti-Saied demonstrations last weekend in the capital city of Tunis, and the majority of parties and civil society entities in the country have condemned Saied’s behavior as well. Several days ago, Saied unveiled a new government which pro-democracy advocates were quick to denounce for comprising of his allies and supporters, while criticism was also levied at the president for his glaring attempts to consolidate power and lessen the role of the cabinet and prime minister. 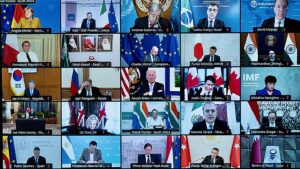 Leaders from the G20 nations and key global organizations met virtually to discuss ways to alleviate the humanitarian crisis in Afghanistan. (Photo from AFP)

In a virtual summit this week, world leaders from the Group of Twenty (G20) nations and other important stakeholders pledged continued support and humanitarian assistance to Afghanistan, as the country deals with the aftermath of the recent Taliban takeover there. The circumstances are particularly dire, as the United Nations has warned that Afghanistan is on the brink of a full-scale economic collapse. The nation’s economy prior to the withdrawal of U.S. and NATO forces was around 75% dependent on foreign aid, and now with the respective troop pullouts being finalized, a void has been left regarding the assistance efforts as well. Debate within the G20 was complex as the United States and others expressed concern over the Taliban’s role in receiving the aid, however, consensus was reached during the virtual summit to ensure that financial support can be distributed without the re-entering of foreign forces into Afghanistan. The G20 nations and their organizational allies are keen on abiding by the withdrawal commitment, so leaders agreed that they were willing to coordinate assistance efforts with the Taliban if necessary to avert a humanitarian disaster in Afghanistan.