Welcome to our NIF Newsletter. In this week’s headlines: President Biden’s national security advisor Jake Sullivan travels to Saudi Arabia and the United Arab Emirates to meet with officials regarding the devastating conflict in Yemen, Turkish President Recep Tayyip Erdogan says that the country is considering purchasing more Russian S-400 missile systems despite strong objections by the United States, and opposition to Tunisian President Kais Saied’s power grab grows as thousands of protesters rally and call on him to resign.

Talks on the Conflict in Yemen 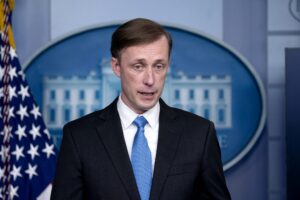 National Security Advisor Jake Sullivan and the U.S. Special Envoy for Yemen traveled to Saudi Arabia and the UAE this week. (Photo from The New York Times)

U.S. National Security Advisor Meets with Officials in Saudi Arabia and the United Arab Emirates Regarding the Devastating Conflict in Yemen

This week, U.S. National Security Advisor Jake Sullivan and other administration officials traveled to Saudi Arabia and the United Arab Emirates to discuss the conflict in Yemen. The Saudi-led coalition, spearheaded by the regimes in Saudi Arabia and the United Arab Emirates, has played a major role in exacerbating the Yemeni conflict and has had a detrimental effect on the humanitarian crisis there. It has drawn international criticism for both its destructive bombing campaign which has killed civilians, as well as the blockade that has worsened the dire humanitarian situation on the ground. Sullivan is the highest-ranking Biden administration official to visit the two countries, and observers are hopeful that the trip underscores the need to engage with them due to their central involvement in the crisis. The White House expressed that the meetings in Saudi Arabia and the United Arab Emirates highlight the Biden administration’s continued commitment to prioritizing human rights concerns as a main focal point of its foreign policy and diplomacy efforts. 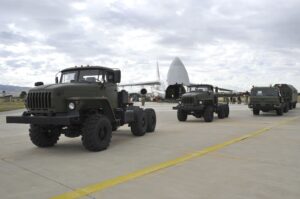 The purchasing of Russian missile defense systems is one of the main points of contention in U.S.-Turkish relations. (Photo from AP)

Turkish President Recep Tayyip Erdogan remarked this week that the country is considering buying more Russian S-400 missile systems, despite strong objections by the United States. The potential move by the key North Atlantic Treaty Organization (NATO) ally has worried some, as Turkey has continued to work with Russia regarding weapon sales. The United States in particular has expressed concern, threatening to impose new sanctions and saying that the S-400s present a security threat to its F-35 fighter jets and broader NATO defenses. Turkey’s initial purchase of S-400s from Russia a few years ago strained relations with the United States, prompting the U.S. to sanction them under a law aimed at pushing back the Kremlin’s influence while also removing Turkey from the F-35 Lightning II jet program. The United States has argued that the S-400s could be used by Russia to secretly obtain classified details on F-35 jets, but Turkey insists that they would not be integrated into NATO systems and do not offer a threat to the alliance. This most recent missile systems dealing between Turkey and Russia is one of the main sticking points in the current state of Turkish-U.S. ties, and Erdogan commented that the issue would be discussed further in his talks with Russian counterpart Vladimir Putin this week. 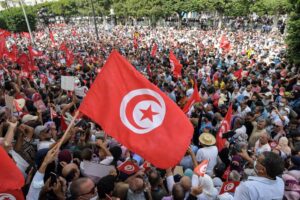 Thousands of pro-democracy demonstrators gathered in Tunis to protest against Saied’s actions. (Photo from AFP)

Over this past weekend, thousands of Tunisians rallied in the country’s capital city of Tunis to protest against President Kais Saied’s efforts to strengthen his grip on power. Saied recently declared that he will be ruling the nation by decree, ignoring the constitution and enabling himself to solely appoint cabinet members and set policy while also maintaining the freeze on Tunisia’s elected parliament. The large-scale gathering of demonstrators voiced their defense of the country’s 2014 national charter and denounced Saied’s clear move to undermine Tunisian democracy. In addition to the significant and growing opposition among the population, around 20 domestic and global human rights groups condemned the power grab and highlighted it as a “first step towards authoritarianism.” Some of the entities that did so include Human Rights Watch, the Tunisian Network for Transitional Justice, and Amnesty International’s Tunisia division. The consolidation of power by Saied is particularly troubling because it signals that the political crisis in Tunisia could continue to spiral without measures to uphold and protect democratic ideals. In one of the latest developments this week, several Tunisian political parties announced the formation of a coalition to counter Saied’s attempts to monopolize power.